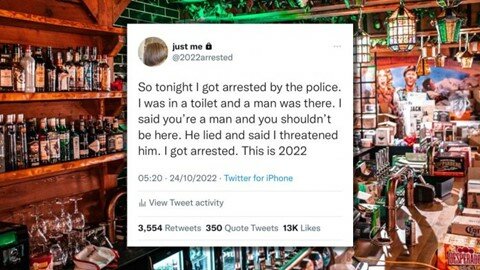 (LifeSiteNews) — A woman was arrested in Wales after standing up for women’s rights and telling a biological male that he should not be in a women’s washroom.

Kate, 54, said that she had gone for a drink at Heidi’s Bier Bar in Cardiff, Wales, with a friend on Sunday night after attending a feminist conference when she came across a man dressed as a “drag queen” in the women’s washroom. She was later accused of “transphobia” and arrested in the wee hours of Monday morning after telling the man that he should leave.

“I said, ‘you’re a man, you shouldn’t be in here,’” Kate said in an interview with REDDUX.

“So, tonight I got arrested by the police,” Kate tweeted Monday, according to screenshots released by REDDUX. “I was in a toilet and a man was there. I said you’re a man and you shouldn’t be here. He lied and said I threatened him. I got arrested. This is 2022.”

According to REDDUX, Kate said that she was the only person in the washroom who thought there was something wrong, and that other women in the room began to harass her.

“When I was down there, there was absolutely no one supporting me,” she said.

Kate also told REDDUX that before she had even left the washroom, the bar staff approached her, accusing her of transphobia and saying she had threatened the man.

“The man was a lot larger than me, so I don’t know why I would do that,” Kate said. “I just said ‘a man shouldn’t be in the women’s toilets.’ I wouldn’t threaten him.”

REDDUX says Kate recorded the incident but that she does not wish to release it to the public for privacy reasons. However, REDDUX did provide a transcript of the conversation.

Kate: You came in and asked me to leave the venue because a man was in the women’s toilets.

Kate: A man was in the toilets.

Bar Staff: It was a transgender woman.

During the conflict, Kate also revealed the fact she is a sexual assault survivor and that she does not want to share a washroom with a man.

Kate: I will leave the venue, but I will record you. I am telling you right now that I have lived in Cardiff for 40 years, and I have never experienced people like you harassing me in women’s toilets.

Bar Staff: So, you have harassed a transgender woman?

Bar Staff: It was a transgender woman.

Kate: It was a man. A man in the women’s toilets and that makes me really uncomfortable. I am a sexual assault survivor and –

Kate: – I do not consent to men being in the women’s toilets.

Bar Staff: So, there wasn’t a male in the toilet, it was a transgender woman.

After the incident, police arrived at the scene around 2 a.m. and promptly arrested Kate after the biological male and his friends accused her of threats and of being on cocaine.

“I am a 54-year-old woman with two adult children,” Kate said. “It’s Sunday night. I was not on cocaine. It’s so ludicrous.”

“They could have tested me, or given me a drug test — they didn’t,” she added. “They searched me and took all of my belongings. I had no drugs. I only had a bar of soap in my pocket because I had been gifted soap.”

Kate said that although the police asked that she apologize, she refused and was finally taken home after a few hours. Although she went into the station on Monday searching for answers as to why she was arrested in the first place, she was told that she was arrested for a suspected public order offense but was de-arrested because the “victim” did not want to press charges.

“At around 2 a.m. on Monday morning, South Wales Police received a report from a bar on Mill Lane in Cardiff city centre that a number of females were refusing to leave the premises after making transphobic comments and threats to a member of the public inside,” South Wales Inspector Darren Grady said in a statement. “The group were removed from the premises by door staff and a 54-year-old woman was arrested for a public order offence. She was de-arrested, as the victim did not want any further police action and given suitable words of advice.”

Kate said that although Sunday’s events “traumatized” her, women need to continue to speak up against men who invade women’s spaces.

“Men now think it’s OK to go into women’s toilets,” she added. “We have to speak up. We have got to make it uncomfortable for them.”