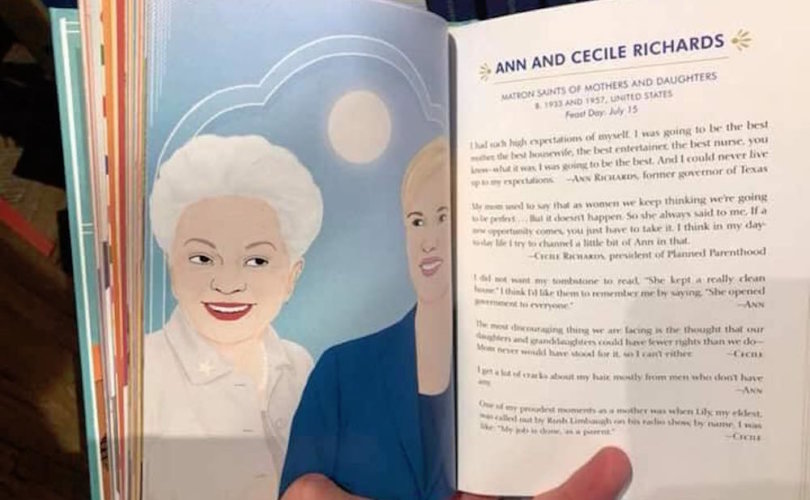 October 11, 2018 (LifeSiteNews) – A feminist author has taken it upon herself to elevate former Planned Parenthood CEO Cecile Richards and a variety of other pro-abortion figures to sainthood.

Released in March by Penguin Random House, Julia Pierpont’s The Little Book of Feminist Saints is billed as a collection of “short, vibrant, and surprising biographies” matched to “stunning full-color portraits of secular female ‘saints’: champions of strength and progress.”

“The idea came from the Catholic saint-of-the-day book, the kind one might read as a source of daily inspiration throughout the calendar year,” Pierpont explained.

“The achievements of women haven’t been documented for nearly as long or as widely as those of their male counterparts,” the author claimed in an interview with Virago. “The more familiar their stories become, the more empowered future generations of women will be.”

While many of the book’s selections are women who made universally-recognized contributions to the world, such as abolitionist Harriet Tubman, radiation pioneer Marie Curie, and novelist Jane Austen, it also elevates several pro-abortion figures.

Pierpont dubs Cecile and Ann Richards the “Matron Saints of Mothers and Daughters.” Their one-page entry, which is readable here via Google Books, consists of a handful of “inspirational” quotes that say little about parenting.

“The most discouraging thing we are facing is the thought that our daughters and granddaughters could have fewer rights than we do – Mom never would have stood for it, so I can’t either,” Cecile is quoted as saying. The context is unknown, but similar quotes from the former abortion chief referred to abortion “access” rather than actual “rights.”

During her 12-year tenure at Planned Parenthood, the younger Richards presided over the abortions of an estimated 3.5 million pre-born babies (almost half of whom were likely female), whose lives she dismissed as not “really relevant” to discussing abortion.

“Planned Parenthood in truth violently separates mothers and daughters by ending the lives of unborn children, male and female,” EWTN Pro-Life Weekly host Catherine Hadro responded. “This dramatically contrasts with whom the Catholic Church offers as the patron saint of mothers: St. Gianna Molla. The modern-day woman was a physician who sacrificed her own life to save that of her unborn child.”

“That is love, and that is what saints are made of,” Hadro continued. “St. Gianna is just one of the many strong women the Catholic Church recognizes as a saint – women whom you won’t find in this blasphemous book for children.”

Pierpont also told Virago that Sen. Kirsten Gillibrand, D-NY, was among the women she would have loved to fit in the book. Gillibrand is a pro-abortion lawmaker who supported and campaigned with former President Bill Clinton as recently as 2016, then claimed he should have resigned for his treatment of women one year after his wife lost the White House to President Donald Trump.