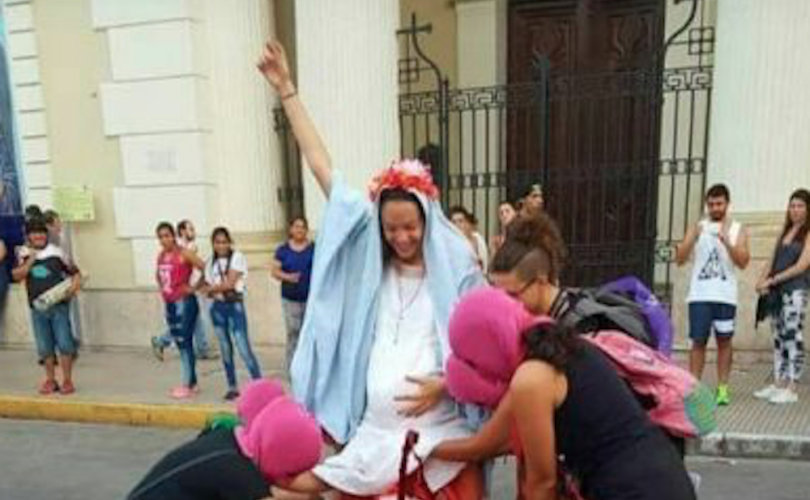 A feminist group mocks the Virgin Mary outside a northern Argentina cathedral.Facebook

TUCUMAN, Argentina, March 13, 2017 (LifeSiteNews) – Feminists in pink masks pretended to commit an abortion on a woman dressed as the Virgin Mary outside a northern Argentina cathedral as part of an International Women's Day protest last week.

A photo of the protest shows what looks like blood and body parts gushing from between the Virgin Mary's legs, facilitated by the pink mask-wearing feminists. The woman dressed as the Virgin Mary holds a fist in the air. She appears to be smiling and wearing a rosary around her neck.

A full image of the display is at the bottom of the article.

The photo of the “performance art” was circulated on social media. Clarin and a Spanish EWTN affiliate reported that Tucuman Archbishop Alfredo Zecca condemned it.

“It is with great sadness that we read about this highly offensive protest in Argentina,” Maureen Ferguson of The Catholic Association told LifeSiteNews. “It is gravely disrespectful to mock the faith of billions of people in the woman whom National Geographic recently described as 'The Most Powerful Woman in the World' in its cover story on the Virgin Mary. It is also highly ironic for a feminist march protesting femicide to advocate for the right to take human lives, including the lives of female babies. Annually about 25 million little girls are aborted worldwide.”

The group Socorro Rosa Tucuman praised the image on Facebook, the Spanish EWTN affiliate reported, saying the woman dressed as the Virgin Mary aborted “patriarchy” and “forced heterosexuality.” The post appears to have been removed. Pan y Rosas expressed its solidarity with the Socorro Rosa group.

“This grotesque and blasphemous act represents what every abortion actually is, and those who are upset by it should be equally upset by each and every abortion that occurs,” Father Frank Pavone, National Director of Priests for Life, told LifeSiteNews. “As Pope St. John Paul the Second wrote in Evangelium Vitae, every attack on a human life is an attack on God and every rejection of a human life is a rejection of Christ himself.”

“This scenario serves to remind us that we have our work cut out for us,” March for Life President Jeanne Mancini told LifeSiteNews. “It is symbolic of the painful confusion in our culture regarding the inherent dignity and vocation of woman. In particular, it shows a deep misunderstanding and lack of appreciation that a woman’s capacity for motherhood is a beautiful gift to be treasured, not a liability and not a right either. Thankfully Mary, mother of Jesus, was courageous despite her difficult circumstance and said yes to motherhood and the miracle of life.”

“This act also shows what is at the foundation of the hard-core pro-abortion people,” Pavone concluded. “They hate the church, and they literally want to abort Jesus off the face of the earth in every manifestation of his presence today.”

Meanwhile, in Buenos Aires, participants in an International Women's Day march tried to set the city's cathedral on fire. They attacked a lone man who held a Vatican flag and tried to defend the cathedral.

At the Women's March in Washington, D.C. in January 2017, a protester carried a sign depicting Our Lady of Guadalupe as a bloody vagina.

“I believe more of this persecution will occur the more the Church stands against the sin of pre-born child killing,” Father Stephen Imbarrato, a priest associate at Priests for Life, predicted.