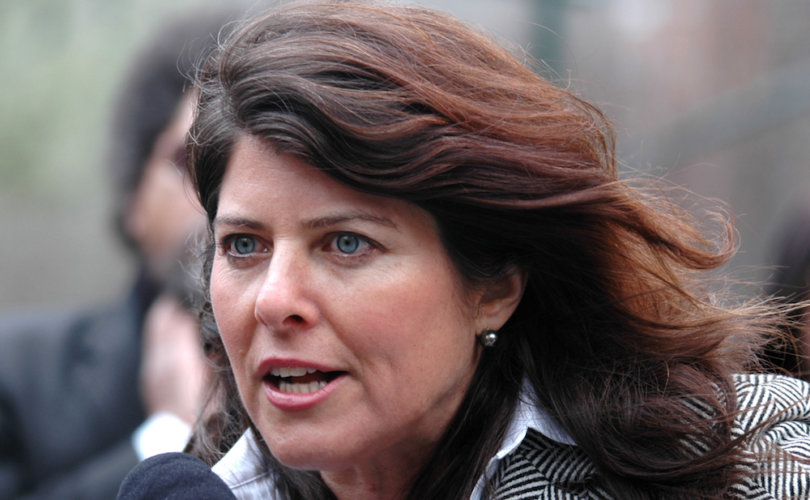 UPDATE, October 23, 2019: Houghton Mifflin Harcourt announced in October it will be canceling rather than revising the book, the New York Times reports, with Wolf and the publisher having “mutually and amicably agreed to part company.”

ORIGINAL REPORT: May 24, 2019 (LifeSiteNews) – Prominent feminist Naomi Wolf has a new book coming out that purports to expose new horrors about the historical criminalization of homosexuality, but her promotional efforts hit a snag this week when an interviewer confronted her with a significant factual error behind the book’s premise.

Releasing on June 18 in the United States (and already available in the United Kingdom), Outrages: Sex, Censorship, and the Criminalization of Love purports to detail “how a single English law in 1857 led to a maelstrom” of oppression against consensual homosexual relationships across both England and the United States.

This week Wolf sat down for an interview with the BBC’s Matthew Sweet to promote the book, but the conversation took an awkward turn when Sweet explained that her thesis rested on a misunderstanding of a key legal term related to the law in question. Wolf claimed to have reviewed records indicating “several dozen executions” for sodomy despite a popular “misapprehension” that “the last man was executed for sodomy in Britain in 1835.”

In response, Sweet explained that she appeared to be basing her count off of appearances of the term “death recorded,” which she took to mean “executed.” In fact, the term denotes a “category that was created in 1823 that allowed judges to abstain from pronouncing a sentence of death on any capital convict whom they considered to be a fit subject for pardon.

“I don’t think any of the executions you’ve identified here actually happened,” he said.

Everyone listen to Naomi Wolf realize on live radio that the historical thesis of the book she's there to promote is based on her misunderstanding a legal term pic.twitter.com/a3tB77g3c1

A stunned Wolf conceded that was “a really important thing to investigate,” and asked him to elaborate on his “understanding of what ‘death recorded’ means.” Sweet responded that he was reading the legal definition as well as the records of one of her examples, which showed the individual had been discharged, not killed.

Wolf also misrepresented the nature of the offense in at least some of her examples, Sweet added. Thomas Silver and James Spencer, for instance, were prosecuted not for sodomy with consenting adults, but for “indecent assault on a six-year-old boy” and “felonious assault on schoolboys,” respectively. “And I wonder about all the others, because all the others that I’ve followed up, I can’t find any evidence that any of these relationships that you’ve described were consensual,” he added. “One of these cases is a bestiality case, not a buggery case.”

New York Magazine reports that following the interview, Wolf and Sweet had a “cordial” Twitter exchange in which she promised to begin “re-checking all of the sodomy convictions on Twitter in real time so people can see for themselves what the sentences were and what became of each of these people.”

At one point, Wolf cited a peer-reviewed article stating that “More than fifty men were hanged for sodomy at the beginning of the Nineteenth century,” but critics pointed out both that the author AD Harvey is a noted hoaxer and, even if true, the alleged hangings would long predate the 1857 law Wolf’s book is about.

Critics took the opportunity to remind the public that Wolf, an esteemed abortion champion, has a record of factual problems in her work and advocacy, from severely misstating statistics about eating disorders in her popular book The Beauty Myth to promoting various conspiracy theories over the years, such as suggesting in 2014 that the US military was only assisting with the Ebola outbreak in Liberia so US troops would contract the virus and bring it back to the United States as a pretext to impose martial law.

Neither US publisher Houghton Mifflin Harcourt nor UK publisher Virago Press responded to New York Magazine’s requests for comment about the matter.