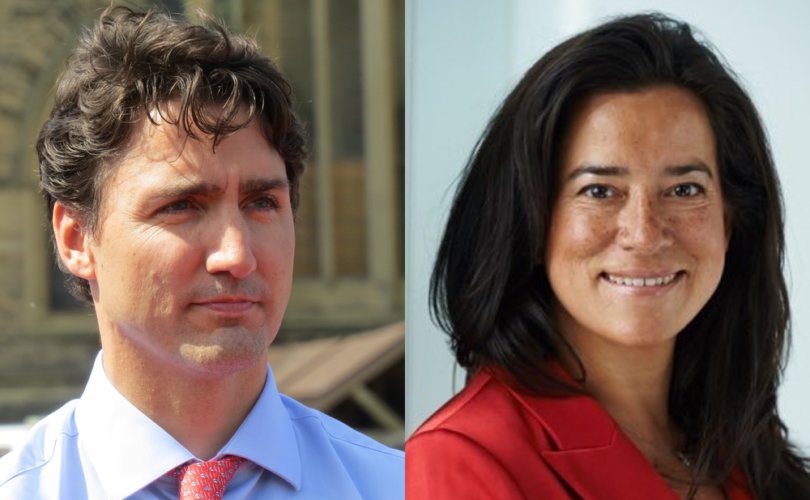 Former attorney-general Jody Wilson-Raybould’s resignation from cabinet last week sharply escalated a crisis many say threatens to split the Liberal caucus, throw the government into chaos, and do lasting damage to Trudeau’s political fortunes. The next federal election is a mere 8 months away, on Oct. 21.

As well one of the 15 women in Trudeau’s famously “gender equal” cabinet, Wilson-Raybould is the first Indigenous person to be Canada’s attorney general.

Meanwhile, in their first day back in the House since the scandal broke, MPs debated an NDP motion Tuesday to hold a public inquiry into the affair, Canadian Press reported. The motion also asked Trudeau to release Wilson-Raybould, the former minister at the heart of the scandal, from the solicitor-client privilege she says prevents her disclosing her side of the story, it reported. The Commons justice committee also voted Tuesday to invite Wilson-Raybould to testify as part of its investigation.

“The fact that this crisis pits Trudeau against one of the highest-profile women in his caucus makes for a lethal political combination,” wrote political commentator Chantal Hebert last week in the Toronto Star.

Things “could get ugly,” she added.

“Judging from the prime minister’s reaction to her resignation, Trudeau and his team are in a take-no-prisoners mood.”

The scandal broke last week with a bombshell report by the Toronto Globe and Mail that the Prime Minister’s Office (PMO) tried to interfere with a criminal prosecution of SNC-Lavalin,  a Montreal-based engineering firm facing fraud and corruption charges in connection with its former government contracts in Libya.

According to the Globe, the PMO put “heavy pressure” on Wilson-Raybould to instruct the director of public prosecutions to drop the charges and negotiate a remediation agreement with SNC-Lavalin.

According to the Globe, Wilson-Raybould resisted the pressure, and in January, Trudeau moved her from justice ministry to veterans affairs, a move many saw as a demotion.

The option of avoiding certain charges by signing a remediation agreement — in which the accused admits guilt and makes reparation — was inserted by the Liberals in their 2018 omnibus bill, after lobbying by SNC-Lavalin that included 14 meetings with PMO officials, pointed out Andrew Coyne in the National Post.

A criminal conviction would ban the engineering giant from receiving federal contracts for 10 years. Some legal experts argue remediation or “deferred prosecution” is a good legal tool, and that employees of a multinational firm shouldn’t suffer because of the crimes of a few, the Calgary Herald reports.

Trudeau insisted Feb. 11 he had “full confidence” in Wilson-Raybould and that “her presence in cabinet should actually speak for itself,” the National Post reported.

But Wilson-Raybould submitted her resignation to Trudeau that night, and announced it the next morning, along with news she had hired former Supreme Court judge Thomas Cromwell to advise her on what she could disclose, reported Macleans.

After the Globe published its report, Wilson-Raybould said she was “bound by solicitor client privilege” and could not comment publicly.

She echoed this in an impromptu scrum with reporters after she left a cabinet meeting Tuesday, saying the rules around what she is free to disclose “are layered and incredibly complicated,” CTV News reported.

Wilson-Raybould confirmed she remains in the Liberal caucus and Trudeau told reporters she asked to come and speak to cabinet, it reported.

The prime minister said last week after Wilson-Raybould’s resignation he was “both surprised and disappointed by her decision to step down” and that it was “not consistent” with their conversations, reported the National Post.

He said neither Wilson-Raybould nor anyone in the government had raised concerns about the SNC-Lavalin prosecution. “She said nothing of that to me,” Trudeau said.

The Liberal-dominated Commons justice committee last week scrapped an opposition motion calling for a full-scale investigation into the scandal during a sometimes heated meeting that fractured along partisan lines. The motion asked the committee to hear public testimony by a number of senior Liberals, including Butts and Wilson-Raybould.

The five-member Liberal majority voted to call three witnesses, Attorney-General David Lametti, as well as the deputy justice minister, Nathalie Drouin, and clerk of the privy council, Michael Wernick, the CBC reported. They also voted to discuss further witnesses during a closed-door meeting. Two Conservative MPs, Pierre Poilievre and Michael Cooper, accused Liberal committee members then of “voting for a cover up.”

Meanwhile, the latest Ipsos poll shows the Conservatives under Andrew Scheer polling ahead of the Liberals, with a 36 percent support rating to the Liberal government’s 34 percent, GlobalNews reported Tuesday.

Landolt, who compiled a list of Trudeau’s “notorious” ethical breaches in the February REALity newsletter, describes the 47-year-old prime minister as “a petulant child.”

“It’s a common thread through his whole period of being prime minister, I’ll do what I like and I won’t be stopped,” she told LifeSiteNews.

“He’s not a man of integrity. He does what he wants.”