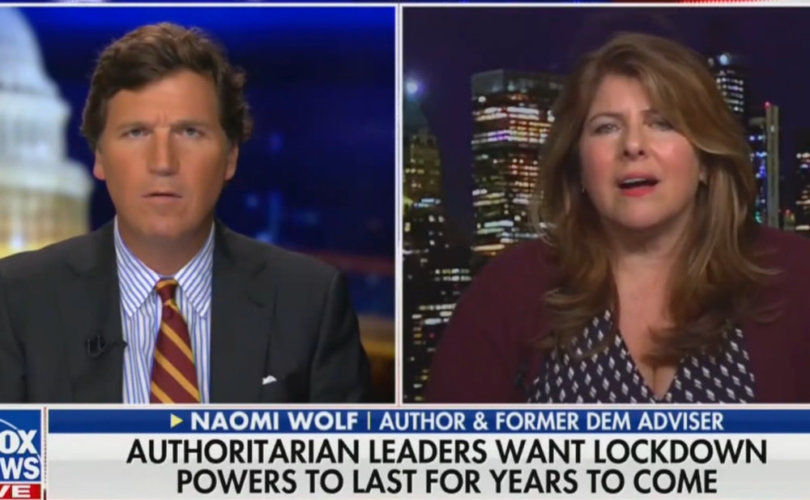 February 25, 2021 (LifeSiteNews) — A former advisor to Bill Clinton and Al Gore has warned that “under the guise of” COVID-19, the United States is becoming “a totalitarian state before everyone’s eyes.”

Feminist author and journalist Naomi Wolf told Fox News host Tucker Carlson on Monday that everyone needs to recognize that “we’re really moving into a coup situation, a police state situation, and that’s not a partisan thing.” She told the right-leaning Carlson that this common threat “transcends everything you and I might agree or disagree on,” and it “should bring together left and right to protect our Constitution.”

Having authored a book chronicling the “10 steps that would-be tyrants always take when they want to close down a democracy,” Wolf stated that “we’re absolutely moving into what I call step 10,” which is “the suspension of the rule of law, and that’s when you start to be a police state. And we’re here, there’s no way around it.”

Though many citizens recognize what is happening, a main obstacle to turning it back is the fact that the people “are not unified … we’re a very divided country for a lot of cynical reasons,” she said.

The hard-left journalist explained how she has interviewed people from all different types of backgrounds and political persuasions including mothers, doctors, and restaurant owners, and they are “absolutely unable to even articulate their fear and horror recognizing that the state has now crushed businesses, kept us from gathering in free assembly to worship — as the First Amendment provides — is invading our bodies as you mentioned which is a violation of the Fourth Amendment [while also] restricting movement.”

As “there is no real science” justifying business shutdowns, Wolf clarified that businesses are being “crushed … because autocratic tyrants at the state and now the national level are creating a kind of merger of corporate power and government power which is really characteristic of Italian Fascism in the 20s.”

“They are using that to engage in emergency orders that simply strip us of our rights; rights to property, rights to assembly, rights to worship, all the rights the Constitution guarantees,” she said.

Very quickly beginning last March, Wolf observed that many policies “locked into place … that are kind of 360-degree full-on totalitarian policies. So, I think a lot of us are kind of in culture shock.”

Having studied “closing democracies for 12 years,” Wolf stated it can be known “from history that no [political leader] gives up emergency powers willingly. They always drag it on and drag it on. And so, every month I’m getting in my email an announcement that Governor Cuomo is extending emergency measures.”

“This is completely unprecedented. Lockdowns have never been done before in free societies and, really, we’re turning into a version of a totalitarian state before everyone’s eyes.

“And I really hope we wake up quickly because history also shows that [there is] a small window [of time] in which people can fight back before it’s too dangerous to fight back,” she concluded.

If I’d known Biden was open to ‘lockdowns’ as he now states, which is something historically unprecedented in any pandemic, and a terrifying practice, one that won’t ever end because elites love it, I would never have voted for him.