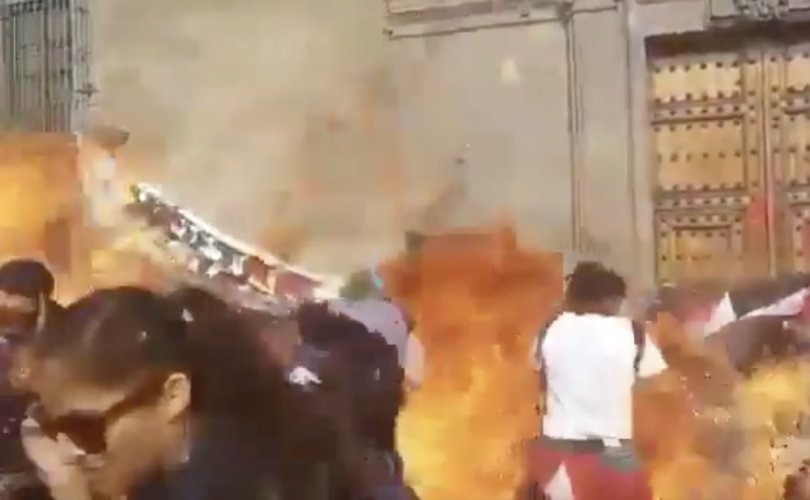 MEXICO CITY, March 10, 2020 (LifeSiteNews) — An act of violence by a left-wing protester in Mexico had an unexpected result over the weekend, as a homemade explosive intended for a government building instead ignited fire and panic within a crowd of feminists.

An estimated 80,000 women descended on Mexico City for International Women’s Day, bringing with them numerous cases of vandalism and property damage, including to bus stations, public monuments, and even the Hermosillo Cathedral, the Post Millennial reports.

One viral video depicts a particularly noteworthy attempt at vandalism, in which a woman can be seen throwing a Molotov cocktail in the direction of the National Palace, residence of Mexican president Andrés Manuel López-Obrador.

Mexican pro abortion Feminists try to learn how to throw a bomb… without much success pic.twitter.com/PaEYqCBPvH

The makeshift bomb didn’t land anywhere near the building or the rows of police officers in riot gear instead bursting into flame within the feminist crowd. Activists can be seen scattering and screaming in panic, with one woman’s pants lit on fire. People come to her aid with fire extinguishers by the end of the 14-second clip.

The Hill reports that a newspaper photographer was hospitalized with second-degree burns from a Molotov cocktail, though it isn’t clear whether she is the same woman from the viral video.

The protests were ostensibly about the increased frequency of murders specifically targeting women in the country, although pro-abortion activists in green bandanas also marched.

The Mexican jurisdictions of Mexico City and Oaxaca allow elective abortions in the first trimester, while abortion is legal in rape cases throughout the entire country. Pro-abortion activists demand complete decriminalization across the country, as well as the elimination of rules allowing doctors to refuse to commit or participate in abortions.