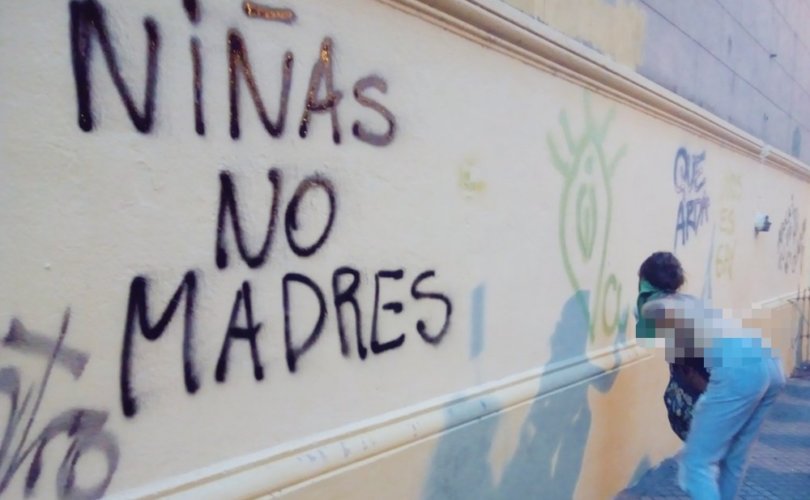 Others sprayed graffiti on the outside walls of churches.

Radical feminists in Uruguay assailed the historic parish church of Nuestra Señora del Carmen in Montevideo. Riot police protected the church’s entrance as hundreds of feminists hurled paint bombs and shouted epithets against Christians. A statement from the Archdiocese of Montevideo said, “We are profoundly saddened that, for the third year, the International Women’s Day march was fouled by a small group that threw paint bombs against the exterior of the church.”

The statement went on to say, “It seems that it has become a custom in our country to assault the Church while failing to defend has become ‘politically correct.’” While acknowledging that the Church has become a “scapegoat” that is blamed for a multitude of issues, the archdiocese said that “vandalizing a church does nothing positive for women.”

In Argentina, radical feminists protested in Buenos Aires and also in some of the provinces. Protesters representing transvestites, transexuals, prostitutes, obesity, and other causes were on hand. Some threw rocks and gasoline bombs, trying to set fires in front of the cathedral in Buenos Aires in what was billed as the International and Multinational Strike for Women, Lesbians, Travestites, and Transexuals. The cathedral in Roca, a city in Argentina’s Rio Negro province, was marred by paint bombs that marked a raucous protest by radical feminists on Friday.

In Spain, pro-abortion and anti-Christian graffiti appeared on the exterior walls of churches in Madrid. According to official estimates, approximately 375,000 protesters filled the streets on Friday in the Spanish capital. The Archdiocese of Madrid denounced the obscene and anti-Christian graffiti that appeared on churches. Radical feminists pushed their way into the offices of the Archdiocese of Valladolid, strewing pamphlets and interrupting a conference on Spanish history. In Logroño, a historic city in La Rioja province, police removed a banner from the entrance to a cathedral that read: “You will drink the blood of our abortions.”

Elsewhere in Spain, amateur video captured feminists attacking a girl who had refused to participate in the feminist rally. The girl was kicked, beaten, and thrown to the ground.

In Lujan, a city near Buenos Aires known for annual pilgrimages by pious Catholics, visitors were greeted by an image of the Virgin Mary in a city park that featured the green kerchief, a pro-abortion symbol in that country. Even while the offending image was found in a public place, Argentina’s Secretariat for Human Rights and Cultural Pluralism did not find the image offensive enough to remove.

The human rights office clarified that the offending image was a “work of art” and an example of the “freedom of expression.” In a tweet, the office declared, “The contents are exclusively the responsibility of the authors. We respect art and the freedom of expression, but we do not approve of insults or offenses that may affect institutions or groups and their religious values.”