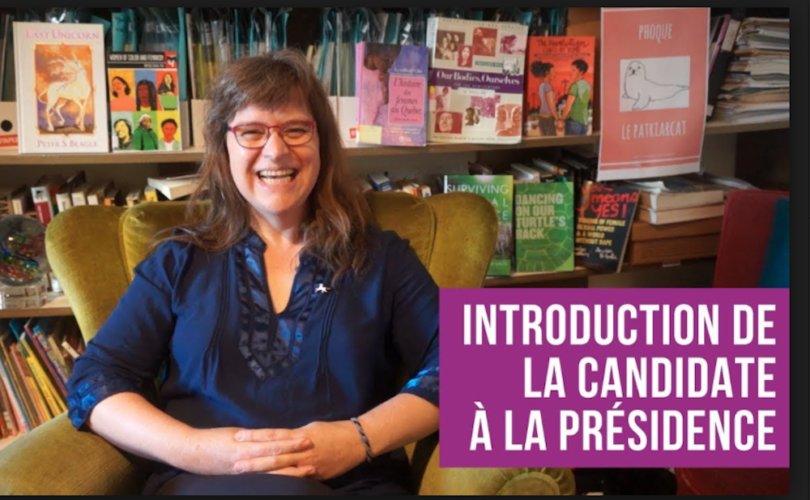 MONTREAL, Quebec, January 17, 2018 (LifeSiteNews) – A month after Quebec’s largest women’s rights group elected a biological male who identifies as a “woman” as president, a feminist backlash is brewing – or as much as it can brew in a province notable for its social liberalism.

The 49-year-old Bouchard, for his part, began his presidency of Fédération des femmes du Québec in December by calling for women’s equality. The Fédération is Quebec’s largest women’s group, representing some 300 feminist groups and about 700 individual members.

Bouchard told National Post that he’s in a unique position, having lived as a privileged male above the so-called glass ceiling, then becoming one of the oppressed group “below that ceiling after transition.”

“In a way, I think that I have an advantage because I’ve seen both sides. I’ve experienced marginalization, even though people say I didn’t,” he said.

But the critics of Bouchard’s presidency aren’t buying it.

The most notable of these are Denise Bombardier, a writer, longtime Radio Canada media personality, and columnist for the Journal de Montréal, and Diane Guilbault, who decamped from the Fédération in 2013 and started another women’s group, the Post reported.

Bombardier has assailed Bouchard’s election from the pages of the more conservative-leaning Journal de Montréal.

She raised the question “Is a ‘trans’ woman a real woman” and asserted that transgender activists intend to “smash the reality of the two sexes to impose an appalling vision where neither man nor woman would exist any more.”

Guilbault told the Post that her group, Pour les droits des femmes du Québec, thinks “the experience of a woman who is born a woman is completely different from the experience of a man who decides one day to present himself as a woman.”

The feminists objecting to Bouchard’s presidency are being “realistic,” said vice president of REAL Women of Canada Gwen Landolt.

“I have to give them credit for that. It’s not often you find them realistic, that’s for sure, but they are realistic on this particular point,” she told LifeSiteNews.

Bouchard’s election “shows how ridiculous” attempting to change into the opposite sex is, she observed.

Georges Buscemi, president of Campagne Quebec Vie, says from what he’s seen, aside from the Journal de Montréal, the backlash against Bouchard's election is limited. That’s because Bouchard’s election has put Quebec’s “progressive set” and liberal left-leaning media in a quandary, by pitting the feminist cause against the transgender cause, he said.

“It’s kind of a polite and embarrassed silence,” Buscemi told LifeSiteNews. “I think everybody thinks, ‘This is ridiculous, but we can’t say it.’”

Buscemi released a video in December criticising gender ideology and the consequences it leads to, namely the election of a biological male who says he's a “woman” to head a woman's organization. Buscemi produced the video “Gender ideology madness” as part of Campagne Quebec Vie’s mission to “promote the recognition that … reason supports Christian faith and morality,” he noted in an email to supporters.

A segment of his video appeared briefly in the year-end special of Infoman, a popular Radio Canada satirical political show. The clip appeared in a way that Buscemi said showed some appreciation for his view. In the Infoman show, a skit of a politically correct “hoedown” has the caller asking men who think they are women to dance with women who think they are men.

The skit ends with a clip of Buscemi's video, where he asks: “And what are we going to have next? Animal marriage?”