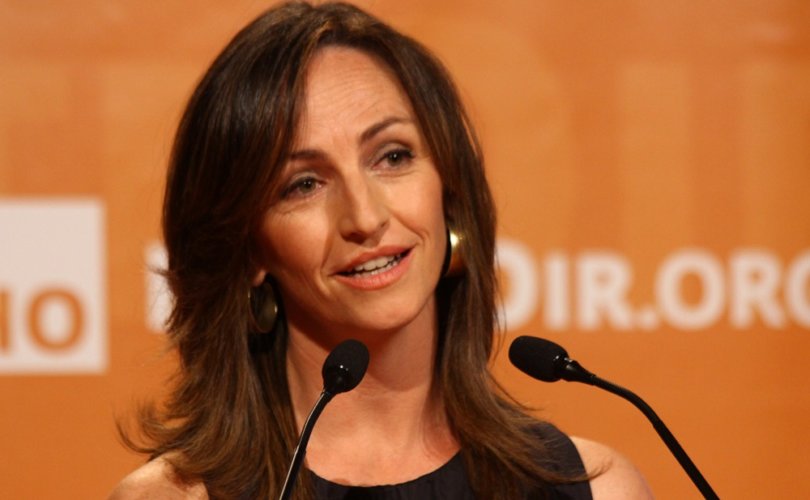 MADRID, November 21, 2019 (LifeSiteNews) — A pediatrician in Spain, who also serves in a local city assembly, is being criticized by leftists because of what they said is the “cruel” practice of the female doctor offering free ultrasound imagery to pregnant women seeking abortions.

Dr. Gádor Joya, who represents the center-right Vox party in Madrid’s local legislative assembly, has been providing the means for expectant mothers to see their developing babies in utero. Waiting outside an abortion facility in the Spanish capital, Dr. Joya offered ultrasound images on November 15 from a van called the “Life Ambulance Project.”

Giving mothers the ultrasounds, free of charge, has riled abortion advocates who claim that Joya’s services are both “cruel” and “inhumane.”

Dr. Joya affirmed at a health committee hearing earlier this month, according to Spanish newspaper El País,  that she and other physicians have been providing the ultrasounds to expectant mothers. “Precisely because I have been doing this,” she said, “I know what has been hidden from these women. Most of them, when they receive the information and hear the heartbeat, decide to go forward with their pregnancies.”

In a social media post, Dr. Joya wrote: “What I am proudest of as a doctor is having helped many women to become mothers when they were on the point of aborting. Yes, I have worked for a project aimed at defending the right to life and dignity of all human beings. And I will continue doing it wherever I am.”

In a 2016 promotional video for the Life Ambulance Project, Dr. Gádor said that more than 300 babies die as a result of abortion every day in Spain. On the video, pro-life gynecologist Dr. Sonsoles Alonso said she explains to women: “First, we try to humanize the child they have inside. Second, we get them to understand that once they pass through the doors of [abortion provider] Dator, they will be ending the life within them and its heartbeat.” As Dr. Joya observes, Dr. Alonso shows an expectant mother a real-time image of her baby in the womb.

Pro-lifers in Spain have denounced what they call strong-arm tactics used by local governments and pro-abortion campaigners to silence pro-life dissent and sidewalk counselors. In September, 62 organizations joined the Pro-Rights Platform to demand that offering assistance to women outside abortion centers be declared a crime. Spanish pro-lifers argue that, unlike abortion practitioners, they themselves gain nothing from dissuading women from abortion and offering them assistance.

Legal protections for unborn babies are minimal in Spain. Since 2010, for instance, abortion for unborn babies within the first trimester of gestation is available on demand. Also, girls under 18 years of age are allowed to have an abortion with parental consent. Abortion has been legal in Spain since 1985. The Dator facility was the first abortion provider to be authorized by the Spanish government, and it is where Dr. Joya frequently goes to offer ultrasounds and other help in Madrid.

In a video that Joya shared on social media, a young mother, who avoided an abortion because of help and counsel she received, made an emotional appeal for similar help to women facing an unplanned pregnancy. Standing in front of Dr. Gádor’s van, the young woman said that “no woman wants” an abortion. Identified as “Angelica,” she called on the Spanish government to help women in her situation. She said she was grateful to pro-life campaigners for convincing her to avoid abortion and added that she now has a three-year-old son.

According to the U.K.-based Independent, feminist Cecilia Gomez dubbed Dr. Gádor’s efforts “immoral.” Gomez said, “This is purely just an attempt to intimidate them into not having an abortion. Their tactics are cruel and inhumane. They might think abortion is inhumane but what they are putting those women through — stuffing them into the van — is inhumane.”

Pro-abortion Gomez theorized that Spanish pro-life activists have followed the example of the pro-life movement in the U.S. She said the Vox party’s pro-life stance is retrograde. She added, “They want to take us back into a time when women did not have a choice about abortions.” A spokesperson for the pro-abortion British Pregnancy Advisory Service told The Independent that it is “misguided and profoundly insulting” that offering ultrasounds can dissuade women from abortion.

Mónica García, who represents the leftist Más Madrid party on the city assembly, predictably expressed astonishment that colleague Dr. Joya was assisting pregnant women outside the Dator abortion center. During a committee hearing, García said, “What we could not have imagined is that there would be people performing ultrasounds on the street. It’s extremely serious.” During the meeting, García questioned Dr. Joya’s stated goal of helping women, saying: “To dissuade or to torture them? Because [Joya] says that many women decide not to have an abortion when they hear the heartbeat. How many women is that? And what happens to them? What is the psychological and emotional cost for these women?”

The Vox party’s national leader, Santiago Abascal, has called abortion an example of a “culture of death” that he intends to replace with a “culture of life” should his party gain a majority. His party, for example, has pledged to end tax-payer funded abortions. The party, which was founded in 2013 on a pro-life platform, doubled its representation in the national parliament to 52 this year, giving evidence of a growing wave of populist pro-life sentiment.