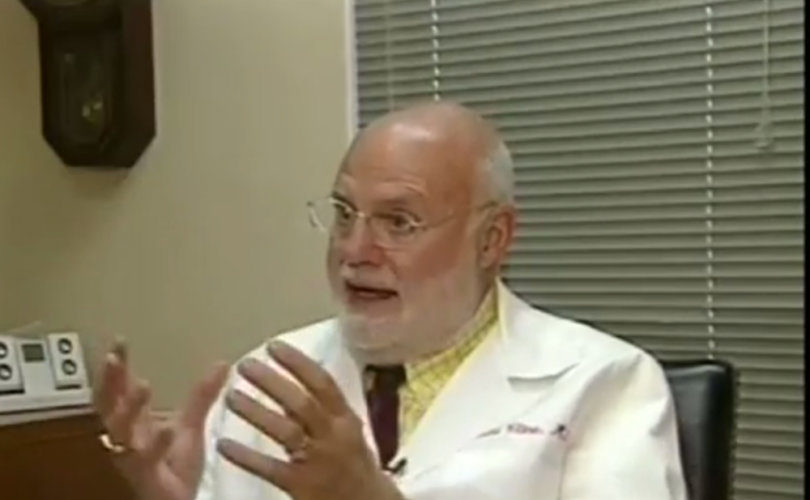 INDIANAPOLIS, Indiana, September 15, 2016 (LifeSiteNews) — An Indianapolis fertility doctor is suspected of using his own sperm to inseminate as many as 50 clients and lying to authorities in a case that raises ethics questions and underscores insufficient regulation in the fertility industry.

He pleaded not guilty to two felony counts of obstruction of justice in an initial hearing on Monday in Marion Superior Court, having told an investigator that he never inseminated his clients with his own sperm.

“One of the unfortunate realities is the extent to which assisted reproduction is not regulated,” said David Orentlicher, co-director of the William S. and Christine S. Hall Center for Law and Health at the Robert McKinney School of Law at Indiana University Purdue University Indianapolis. “There aren’t as many legal regulations as there should be.”

An adult woman conceived in Cline’s clinic had sought her genetic relatives online, discovering at least seven siblings also conceived there. The siblings then determined that they were linked to 70 of Cline’s relatives.

Cline ultimately admitted at a meeting with some of the siblings this past spring that he felt pressured to use his own sperm when he was unable to procure donor sperm and that he had done so some 50 times.

Four of the siblings filed a complaint with the Indiana Attorney General’s office, according to the probable cause affidavit filed by the Marion County prosecutor's office.

“I am outraged by this clear breach of ethics in the field of medicine,” one sibling wrote on a Change.org petition page requesting an investigation of Cline and a change in laws governing sperm donation. The petition questions the likelihood of high numbers of children in the same community at risk of entering into relationships with half-siblings unbeknownst to them.

The attorney general's office investigated Cline but has not pursued any charges.

The obstruction of justice charges filed against him last week “were the most appropriate based on the evidence available,” according to a spokeswoman from the Marion County prosecutor’s office. No additional criminal charges are anticipated.

Director and co-founder of Colorado-based Donor Sibling Registry Wendy Kramer said she was not surprised that further charges had not been brought against Cline.

“He didn’t break any laws because there are no laws,” Kramer said. “The reproductive medicine industry in regards to sperm donations … is generally a free-for-all and at the expense of the very children we are creating.”

Cline, who retired in 2009, was well-known locally throughout his career, closing his OB practice in 1979 to focus on fertility. He helped pioneer a technique in 2000 to freeze extra eggs of women going through in-vitro fertilization rather than dispose of those not later fertilized.

He had written in a January 2015 letter during the attorney general’s investigation that he received donor sperm from resident doctors and dentists between 1971 and 1981, and that it was his policy not to use a donor for more than three successful pregnancies. “I can emphatically say that at no time did I ever use my own sample for insemination.”

“I followed suggested guidelines of the period,” Cline also wrote. “I also did nothing morally or legally wrong.”

Donation of fresh sperm was common before the rise of HIV in the mid-1980s, giving way to frozen sperm that is tested and quarantined. Now with advances in the area, male reproductive issues having reduced donor sperm use with heterosexual couples. Donor sperm is most often used for mothers single by choice and lesbian couples, according to Dr. Laura Reuter, medical director of Midwest Fertility Specialists in Carmel, Indiana.

Reuter said Cline's alleged conduct was “deceptive and immoral,” but also that the fertility field has changed a great deal since the early 1980s.

Because of the prospect of situations similar to the Cline allegations before the rise of commercial sperm banks, Kramer routinely advises people born before 1990 who are searching for their mother’s sperm donor to check out their mother’s fertility doctor.

“It’s a little bit creepy that I have to tell them that,” she said.

The Cline case has left numerous people in the area questioning their biological roots.

“It was unethical what he did. He was telling his patients one thing and doing another,” another Cline sibling said. “I want to find out as much truth as I can, but I know deep down that we never will know the complete truth as to how many siblings we do have.”

Cline was released on his own recognizance by a magistrate on Monday. He is scheduled for another hearing on October 17.