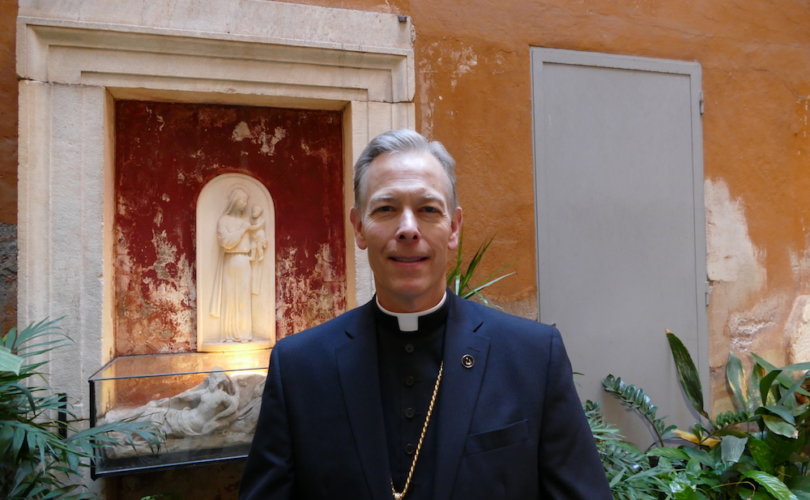 PORTLAND, Oregon, September 25, 2018 (LifeSiteNews) – Another bishop has directed his priests to recite the prayer to St. Michael the Archangel after every Mass for the protection of the Church amidst of the abuse crisis.

Archbishop Alexander King Sample of the Archdiocese of Portland sent a letter to his priests last week encouraging them to lead the prayer to Saint Michael the Archangel after all Masses. It was the universal custom of the Latin Church to pray this prayer from 1886 until the liturgical revolution of the late 1960s.

The Archbishop told Catholics in an August letter that the abuse crisis is a “spiritual and moral crisis, even a crisis of faith” that must be combated by “prayer, penance and sacrifice.”

The crisis “is — at its heart — the work of the Evil One. Satan ‘prowls throughout the world, seeking the ruin of souls’ and we must battle against his wickedness and snares. (Prayer to St. Michael the Archangel),” he wrote.

Father Maro Escano of Our Lady of the Mountain Catholic Church in Ashland, Oregon told his parishioners that they would begin to recite the St. Michael prayer on Sunday, September 23.

“We will also pray it after each daily Mass during the week,” he wrote in the online parish bulletin. “This prayer is a powerful weapon against Satan’s snares as we ask for the powerful help of the leader of all the angels and of the army of God, St. Michael the Archangel.”

“Let us not be caught unaware brothers and sisters, we are in a war and in this ongoing battle that we have against Satan and his forces, we the members of the Mystical Body of Christ – the Church – are experiencing a great attack. Let us seek every help that we can get,” Escano said.

Father Eric Anderson of St. Stephen Catholic Church in Portland turned to social media to tell his Facebook friends and parishioners how he would fulfill his archbishop’s wishes:

“Archbishop Sample has asked all the priests of the Archdiocese of Portland to lead the faithful in praying the Prayer to St. Michael the Archangel after every Mass,” he wrote. “We already pray this prayer after all Low Masses and daily Masses, but we have not been doing so at the end of 10:30 am Sunday Mass. We will begin doing so today, Sunday, September 23rd in response to the Church’s great need for sincere prayer on the part of all the faithful.

Anderson told his readers that such prayers are necessary “to take back the Church.”

“The Church is in great need of prayer, especially prayers of deliverance and protection against the powerful forces being waged even from within the Church,” he wrote. |The 20th century was indeed a devastating time for Catholicism. Let’s make the 21st century a time to take back the Church: to restore authentic Catholicism and to become saints.”

In recent weeks, at least four other bishops in the United States have asked their priests to restore the tradition of leading the Prayer to Saint Michael the Archangel. Bishop Robert C. Morlino of Madison, Wisconsin, Bishop Frank Caggiano of Bridgeport, Connecticut, Bishop David Zubik of Pittsburgh, Pennsylvania, and Bishop Rick Stika of Knoxville, Tennessee have also asked their priests to lead the Prayer to St. Michael the Archangel after all Masses from now on.

The shorter version of the Prayer to St. Michael the Archangel generally used after Masses is as follows:

Holy Michael, the Archangel, defend us in battle. Be our safeguard against the wickedness and snares of the devil. May God rebuke him, we humbly pray; and do you, O Prince of the heavenly host, by the power of God cast into hell Satan and all the evil spirits who wander through the world seeking the ruin of souls. Amen.

It is popularly believed that Leo XIII wrote the prayer after experiencing a vision or locution while attending Mass. According to eyewitness Father Domenico Pechenino, the pope seemed to see something over the celebrant’s head that upset him.

“The Pope stared motionlessly, not batting an eye. Horror and awe filled his face; his color and expression changed rapidly. Clearly, he was experiencing something grave and unusual.”

“Finally, as if coming to his senses, he lightly but firmly tapped his hand, stood up, and headed directly for his private office,” Pechenino’s story continues.

“His retinue followed, whispering: 'Holy Father, are you not well? Do you need anything?'  'Nothing, nothing,' [Leo replied].”

“Half an hour later, he called for the Secretary of the Congregation of Rites and, handing him a sheet of paper, requested that it be printed and sent to all the ordinaries around the world…It was the prayer recited by Catholics after every Mass for decades thereafter, a passionate plea to St. Michael, the Prince of the heavenly hosts,” the tale concludes.

Another story recounts that Leo heard a conversation between Christ and Satan in which Satan bragged that he could destroy the Church if given enough power and time.