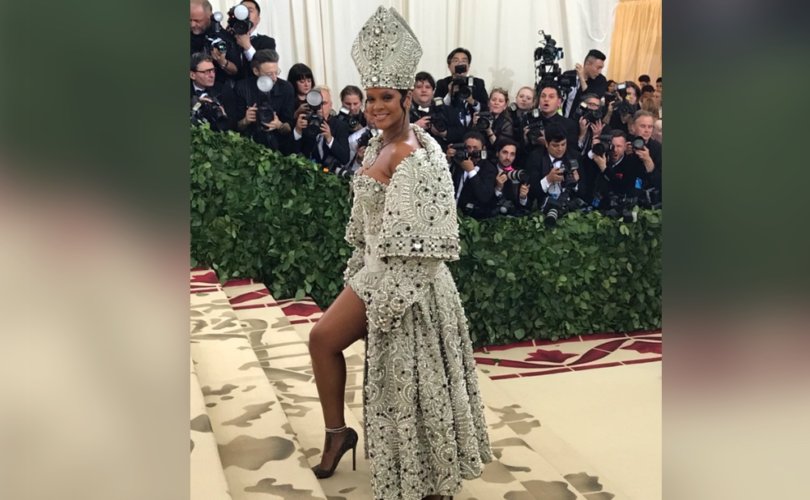 Singer Rihanna dressed as the pope at the May, 2018 Met Gala, New York. Twitter

May 9, 2018 (LifeSiteNews) – Catholics found a number of reasons to criticize the 2018 Met Gala. There was the presence of a Catholic-themed bondage mask in an exhibit alongside Vatican-loaned sacred vestments; there were the scantily-clad celebrities dressed as a cleavage-flaunting Blessed Virgin Mary, a seductive female cardinal, and a bejeweled female pope; and there was the presence of New York's Cardinal Timothy Dolan at the event who rhapsodized about the “Catholic imagination.”

It was singer Rihanna who dressed as the pope, complete with a glittery mitre that Dolan later joked he loaned her.

Laura Ingraham, who was speaking with Arroyo, called the event “Fifty Shades of Catholicism.”

Ross Douthat commented in the New York Times that attendees wore sacred-themed vestments, “sexing them up for shock value.”

“Heavenly Bodies: Fashion and the Catholic Imagination” was the theme of this year’s annual fundraising gala for New York’s Metropolitan Museum of Art, and also the theme for the Met’s largest exhibition to date.

But not all Catholics were disturbed by what is being called “blasphemy” by many.

Claire Giangravè and Christopher White of Crux wrote a glowing report about the event, calling it a “homecoming” for celebrities who once practiced the Catholic faith. Their report exuded enthusiasm for the event.

“Grammy-Award winner and evening co-host Rihanna, for instance, was one of the night’s real standouts, showing up with her own pope-like Golden miter, adorned with jewels and crystals,” they reported.

Archbishop of New York Cardinal Timothy Dolan told Crux that he “did not find the spirit of the evening to be offensive or blasphemous at all.”

Eloise Blondiau of the Jesuit-run America magazine said that Catholics “should not complain about cultural appropriation in the same way that other groups might because they are so well-represented in popular culture.”

Below LifeSiteNews publishes a few reactions to the exhibit from across the Catholic world.

***Catholics who criticised the event***

Raymond Arroyo and Laura Ingraham on The Ingraham Angle, Tuesday, May 9, 2018:

Arroyo:  “Here’s the problem with all of this. There are some Catholics that look at this and they say, ‘these vestments that are on display form the Vatican – they mean something. And what they mean [is] they point to the reality of the Mass. And Catholics believe [that] in the Mass, Jesus Himself becomes present.  That’s what all the smells and bells and the art and the architecture is about.

“When you remove that meaning, you’re left, basically, with a very glitzy drag show.”

“The Vatican gave permission for sacred vestments to be displayed at the Metropolitan Museum.  They really should have put some conditions on the loan.”

[Pointing to some of the “art” objects on display, like the bondage mask covered in rosaries] Arroyo: “These are side-by-side with Papal vestments.

Ingraham:  And Dolan is standing there near the bondage hat?  What is going on with that?

Arroyo:  “Cardinal Dolan said, ‘This was to bring out the good, the beautiful and the true … ’”

Ingraham interjected: “… and the leather.”

Arroyo continued with his statement, “… It’s very hard to see that, for this narcissistic display.”

Ingraham:  “This is Fifty Shades of Catholicism.  This is ridiculous.  I’m going to get in all sorts of trouble [for saying this].”  Ingraham then blessed herself with the sign of the Cross.

Like Proust’s “caravans of swells” attending liturgical performances, the attendees at the Met were paying a cultural homage to the aesthetic riches of the Roman Church — when, of course, they weren’t sexing them up for shock value…

…in the case of the opulent style of Catholic fashion on display at the Met Gala, it is very clear where Francis stands. As Tara Isabella Burton points out in an astute piece for Vox, it’s the pope’s traditionalist adversaries who are more likely to don the sort of “heavenly” garb being feted and imitated at the Met — while from his own simple choice of dress to his constant digs at overdressed clerics and fancy traditionalists, the pope believes that baroque Catholicism belongs in a museum or at a costume gala, and that the church’s future lies in the simple, the casual, the austere and the plain.

For this, as for his doctrine-shaking innovations, Francis has won admiring press. But as with the last wave of Catholic revolution, there is little evidence that the modernizing project makes moderns into Catholics.

…Here the Met Gala should offer the faith from which it took its theme a little bit of inspiration. The path forward for the Catholic Church in the modern world is extraordinarily uncertain. But there is no plausible path that does not involve more of what was displayed and appropriated and blasphemed against in New York City Monday night, more of what once made Catholicism both great and weird, and could yet make it both again.

According to the organizers, this display of papal vestments and various tasteless, indecent, and blasphemous fashion items is meant to illustrate “the Catholic imagination.” Whenever someone uses the phrase—or its close cousin, “the sacramental imagination”—I know that I am about to hear a tedious disquisition on Flannery O’Connor, or an account of Catholic belief that muddles error and truth. In this regard, the exhibition does not disappoint…

We should attend to the real Catholic imagination and not its sentimental counterfeit. The same faith that gave rise to these beautiful baubles proposed views on sexuality and social order that are contrary to the spirit of the age. It is foolish to suppose that either the Church’s teaching or its relics are mere artefacts that now have lost their power. These beautiful copes, stoles, clasps, and rings still move men—still have the power Leo XIII acknowledged in Testem Benevolentiae when he advised priests in America to spread the faith “by the pomp and splendor of ceremonies” as well as “by setting forth that sound form of doctrine.” In the Met's carnival atmosphere, their splendor seems all the more radiant.

Church Militant considered using the headline “Dolan pimps out Catholic beauty,” but “we didn’t want to insult any pimps.”

“…what the hell was the Vatican thinking?”

***Catholics who defended the event***

Angels, Madonnas, and cinch-waisted bishop-inspired dresses graced the red carpet for the fashion world’s biggest night out at the 2018 Met Gala on Monday night. While the theme of the evening was “Heavenly Bodies: Fashion and the Catholic Imagination,” for some star-studded attendees, the event was more of a homecoming.

Grammy-Award winner and evening co-host Rihanna, for instance, was one of the night’s real standouts, showing up with her own pope-like Golden miter, adorned with jewels and crystals.

Hollywood darling Anne Hathaway, wearing a voluminous cardinal red gown, passed by members of the press on the red carpet. When one shouted, “You look like an angel,” she snapped back “Actually, I’m feeling quite devilish.”

More controversial, however, was actor and producer Lena Waithe, who entered wearing a rainbow flag cape to draw attention to LGBT concerns.

While Cardinal Timothy Dolan, Archbishop of New York, was on hand for the evening’s gala, he did not make his way down the red carpet, choosing instead to enter from a side entrance.  Yet that didn’t keep his name from being a part of the celebrity chatter, with many attendees saying they were delighted he would be joining.

Inside, Dolan was met with more familiar company, when the Sistine Chapel choir offered a surprise performance.

“I did not find the spirit of the evening to be offensive or blasphemous at all.”

“Was some of it edgy? Yes, but I never met any person that seemed to be snippy or snotty about the Church, or who intended anything to be offensive.”

“We could have had a lecture at the museum on the Catholic imagination and not too many people may have showed up, especially the crowd from last night. But when you do an evening like that, you get everybody.”

“Boy, you talk about the public square – with some of the movers and shakers who were there – and they’re reminded of positive memories of the Church and of devotions, prayers, traditions, and liturgies, as many of them told me they were. This could only be for the good of the Church.”

…Catholics, while entitled to offense, should not complain about cultural appropriation in the same way that other groups might because they are so well-represented in popular culture. The stakes would be much higher, for example, if the “Islamic imagination” were taken as the exhibition and gala’s theme. For every shallow engagement with the faith that a Catholic must endure, there is an abundance of better examples (“The Young Pope,” “Lady Bird”) to look to, and the consequence of misrepresentations are less dire.​