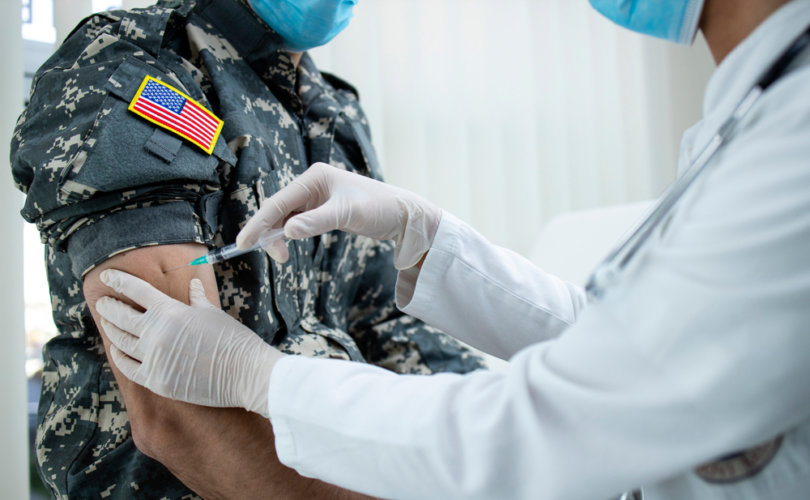 TUCSON, Arizona (LifeSiteNews) — A U.S. Air Force (USAF) pilot has spoken out against the military’s COVID-19 shot mandate for active servicemembers, detailing his own debilitating injuries and the “widespread abuse” within the service of those who have been injured following reception of the abortion-tainted shots.

Speaking at Wednesday’s Truth for Health Foundation conference exposing the military’s methods regarding the implementation of COVID regulations, the pilot, who elected to remain anonymous for fear of reprisal, documented his experience of being forced to take one of the experimental COVID jabs, only to suffer severe adverse events over the months that followed.

The officer has been a USAF pilot for over a decade, during which time he has spent more than 200 hours flying in combat.

But after Secretary of Defense Lloyd Austin handed down a mandate to troops in August last year, introducing disciplinary action against members who refused to take a COVID shot by threatening to remove benefits such as pensions, pressure mounted on the pilot to take the shot, which he received in October.

The same day, he said, he “began having complications.”

“Within four hours I knew something was wrong,” the serviceman stated, adding that his experience with the COVID shot was “like no other vaccine I had ever taken.”

The pilot experienced sharp pains in his hips and groin, severe shortness of breath and fatigue, and a tightness in his chest, “like a squeezing of the heart that progressively got worse.” He also complained of having “numbness and tingling in both arms and legs.”

Upon lying down, a severe nausea overtook him, but when he got up to vomit, the nausea was replaced with an extensive period of uncontrollable convulsions, making it difficult to remain on his feet. At this point his wife called the emergency services to take him to the hospital.

According to the pilot, most of his symptoms lasted for a number of months, at least until December of last year. He later made contact with Dr. Elizabeth Lee Vliet, the CEO and co-founder of the Truth for Health Foundation, who examined him and referred him to Dr. Peter McCullough, an internist and cardiologist who has spoken out against the current crop of COVID jabs, for further testing.

McCullough diagnosed the officer with pericarditis, a dangerous inflammation of tissue surrounding the heart which has been linked to the mRNA COVID shots, and a likely case of anaphylaxis (a life-threatening allergic reaction). The physicians are still investigating the possible neurological side effects, according to the pilot.

After noting that he “was afraid to go to sleep because of how bad [the condition] was,” thinking it likely that he might not wake up again, the officer explained that personnel at the Department of Defense (DoD) “did not take it seriously,” and subsequently stated that the lack of medical care he received from the military’s medical team “was alarming.”

“They tried to pass it off as no big deal, they tried to misdiagnose it as anxiety and things that it wasn’t,” he lamented.

According to the pilot, his job was threatened by the military, and he was grounded for a month while internal investigators attempted to officially determine his case as one of anxiety, despite his “long document list of severe symptoms that were clearly happening.”

“We have a real problem with people who are getting [COVID-related] horrors like this and there’s not a whole lot of outlets and support throughout the ranks to help people with this.”

“There’s a real incompetence as to what these vaccines are doing to people … in both civil healthcare and military healthcare,” he added.

The pilot expressed that, alongside himself, many other servicemembers and employees in the DoD and federal government are experiencing injuries from the jabs but are “being silenced, being threatened … ignored,” and that boosters are being foisted upon personnel, despite the slate of injuries associated with the first round of COVID shots.

“There is widespread abuse, malpractice going on … it’s real, it’s serious, and we need help.”

The people who are “supposed to be on our side are gaslighting us.”

Disability rights attorney Alexander Callender, also speaking at the conference, explained that the COVID shot mandate is illegal based on enshrined disability laws, designed to protect against the development of disabling conditions such as those experienced by the pilot.

Using the exemption in law for medical interventions that can cause disabilities, the lawyer and his firm hope to create a universal protection against such mandates for both military members and ordinary civilians in the U.S.