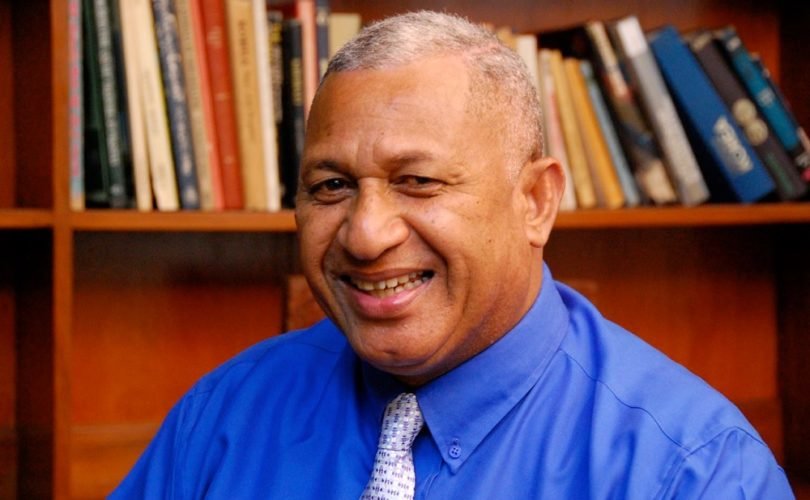 Bainimarama commented off the cuff to a statement made by Shamima Ali, the head of the Fiji Women's Crisis Center, that Fiji should legalize same-sex “marriage.”

“Fiji does not need that rubbish,” Bainimarama said. He added that if a woman wants to “marry” another woman, “they should go and have it done in Iceland, and stay and live there,” he said.

Homosexual reaction was swift. Jasmine Kaur, founder of the gay activist group Oceania Pride, called the prime minister's comment hateful and intolerant, and she has called for him to apologize. “He actually needs to apologize to the LGBTIQ community,” she said. “We need to create a culture of acceptance not (in)tolerance, and that is what I would like him to teach the nation.”

But the strongest charges against the prime minister for stating his opinion came from homosexual activist and attorney Aman Ravindra-Singh, who says Bainimarama has broken the law. Singh claims that the prime minister has violated section 26 of the Fiji constitution, and he should be charged under the criminal code.

“Under section 65 there is a particular offense called inciting communal antagonism,” Signh explained. “This issue has now flared within our community and in our society as a whole,” he claimed. “The prime minister has breached section 65 in that his action has incited communal antagonism, and he should be investigated and charged.”

Singh claimed that at least one citizen is interested in bringing formal charges against the prime minister by filing a police complaint over his comment.

For his part, the prime minister rebuffed threatened criminal charges that he violated the constitution by explaining that the Fiji constitution does not refer in any way to homosexuality or homosexual “marriage” in addressing the issue of citizen equality.