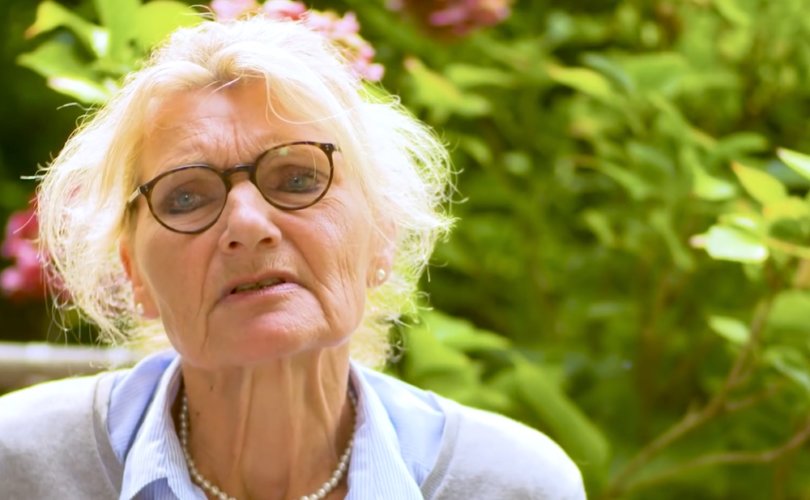 Margreet tells the story in Fatal Flaws about how her mother was euthanized without her consent. Fatal Flaws / screen-grab

LONDON, Ontario, April 20, 2018 (LifeSiteNews) – Filmmakers of a documentary that exposes what they say is the “lie” behind the euthanasia movement are looking for financial help to the tune of $25,000 to complete their project on time.

“Fatal Flaws: Legalizing Assisted Death” was created and produced by Dunn Media in association with the Euthanasia Prevention Coalition, and will premiere in Ottawa May 8.

Two years in the making, the documentary follows Ontario filmmaker Kevin Dunn over 31,000 miles and across four countries as he investigates whether a society should ever give its doctors the power to kill another human being — and what happens when it does.

Dunn speaks to doctors in the United States and the Netherlands who are both for and against euthanasia, and to top euthanasia lobbyists.

He tells stories of vulnerable people who escape the euthanasia pushers — and those who do not.

In one poignant segment, he hugs 29-year-old Aurelia Brouwers, a Dutch woman who suffered from mental illness and who, as the film relates, ultimately succeeded in her four-year-long quest to be euthanized for that reason.

The resulting 73-minute documentary puts a human face to the appalling reality of doctors killing their patients, and “will change the way the culture views euthanasia,” says Alex Schadenberg, executive director of the Euthanasia Prevention Coalition.

But the ambitious project has left EPC scrambling to make up a $25,000 shortfall, and has forced Schadenberg to send out an emergency appeal.

He’s seeking donations, short-term interest-free loans, and pre-orders for the DVD (see below for details).

The documentary is critically needed because the euthanasia lobby is relentlessly pushing to legalize the practice in the United States, says Schadenberg.

“There’s a tipping point coming in the U.S. So we’re fighting back.”

Fatal Flaws also focuses on the Netherlands, where voluntary euthanasia is legal, but where a 2015 study found 431 people were euthanized involuntarily, Schadenberg noted.

That statistic hits home with a “shocking” interview with Dutch woman Margreet, whose mother was killed without her consent.

“I think it’s an incredibly powerful story,” Schadenberg told LifeSiteNews. “It needs to be told.”

Margreet relates in Fatal Flaws that she got a voicemail from the emergency room doctor at the hospital where her mother’s general practitioner had ostensibly admitted her for treatment for pneumonia.

“You don’t have to hurry,” he told Margreet,  “because you won’t find her alive when you get to the hospital.”

The ER doctor had called her GP, who told him her mother was “lonely, she was depressed, she didn’t want to go out of her house.” So they decided “it was better not to treat her any more,” Margreet relates.

“At the moment they gave her the injection, they said they gave it so that so that she could go to sleep,” she tells Dunn.

“But in fact, they just killed my mother.”

The documentary also features Canadian Candice Lewis, who has cerebral palsy, and who overheard an emergency room doctor telling her mother she should let him euthanize her.

Her mother didn’t countenance the idea for a minute, but the episode, as Fatal Flaws reveals, appears to have left Lewis with emotional trauma.

When such stories are juxtaposed with euthanasia advocates talking about autonomy, the deception of the latter is glaring.

“The film really undoes what the euthanasia lobby has been selling,” he adds. “It’s really powerful when you watch it.”

Editor’s note: Tickets for the May 8 Fatal Flaws premiere at the Ottawa Little Theatre are $10, and can be purchased here. The screening is sponsored by the EPC, and will be followed by a live recorded round-table discussion on the dangers of legalizing euthanasia and assisted suicide.

As with its previous documentary, The Euthanasia Deception, EPC is urging people to organize local screenings of Fatal Flaws. To book a screening with a speaker, contact the EPC at [email protected] or call 1-877-439-3348.