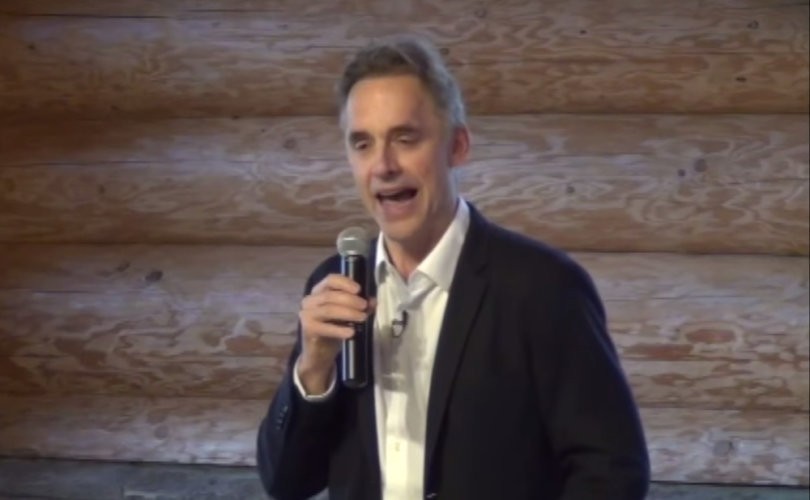 Jordan Peterson gives a talk on free speech to Linfield College students at a hotel after he was not allowed to speak on campus.

McMINNVILLE, Oregon, May 5, 2017 (LifeSiteNews) — Canadian free speech advocate Jordan Peterson spoke to a full house of students last month at a hotel after Linfield College administrators cancelled his talk on campus. He told the crowd the goal of free speech was to find truth so that it could be put “to the service of love” as all people “stumble forward toward the Kingdom of God.”

Peterson, a clinical psychologist and University of  Toronto professor who has become a hero to libertarians and victims of political correctness, used religious terms several times. He declined to reveal the specifics of his own beliefs. However, his April talk made clear that he sees free speech as a weapon in a great battle between good and evil — or love and nihilism. The battle is about whether the world — and each individual — will move “hellward” or “heavenward.”

Peterson emerged as a public figure six months ago when he began posting short videos to YouTube revealing his contempt for several government and university measures to compel speech supportive of LGBT claims that people can change their genders.

The particular point of contention that drew the wrath of leftists and the LGBT movement was Peterson’s refusal to use pronouns for “transgender” people. However, at his speech here, Peterson said, “It wasn’t about pronouns at all.”

Peterson, 55, was originally slated to speak on campus at Linfield, a Baptist liberal arts school, but the administration sacked the event. Though the decision followed protests from LGBT students, Susan Agre-Kippenhan, the vice president for academic affairs, gave other reasons.

The sponsors, Young Americans for Liberty, had not informed the administration of the content of Peterson’s speech as required, she said in a news release. As well, the event was announced to outsiders, violating “the safety of the community.” The student society also took back the funding for Peterson’s honorarium.

The world is not safe, he explained. “When tragedy and even malevolence come along, you have to be able to deal with it. You make them strong,” he said by training students for the combat of words and ideas, however uncomfortable it made them feel.

Peterson told his audience that free speech was one of the key tools or “weapons” arming people to deal with a life full of suffering. One could respond to suffering with nihilism — the belief that suffering rendered life meaningless. High school students who start shooting their classmates believe this to be a logical response to meaningless suffering.

Peterson said the correct response to suffering, and the way to give one’s life meaning, is to act with love, which he defined as committing oneself “to ameliorate unnecessary suffering.”

Believing that life is meaningful brings a “terrible” responsibility, because with every action, “you are deciding between heaven and earth.”

To decide to move oneself and the world “heavenward,” said Peterson, people need all the help they can get. Free speech “maximizes” society’s chances of finding the best ways to reduce suffering, but it requires humility from participants. They must agree to listen as well as speak, and accept the possibility their opponents may be right.

Peterson also said a good marriage needs free speech between parents. Only if both told the other the truth as they saw it can they form a unified front to resist their children’s challenges. But that wall of resistance to childish willfulness also “makes them secure. … When children push the limits as they inevitably will, they won’t find something spongy and decayed and weak. They find something strong and sturdy. They are protected by that wall and that stops them from being anxious.”

Prof who refuses to use gender pronouns points to Catholicism

WATCH: Fire me, fine me, jail me. I won't back down