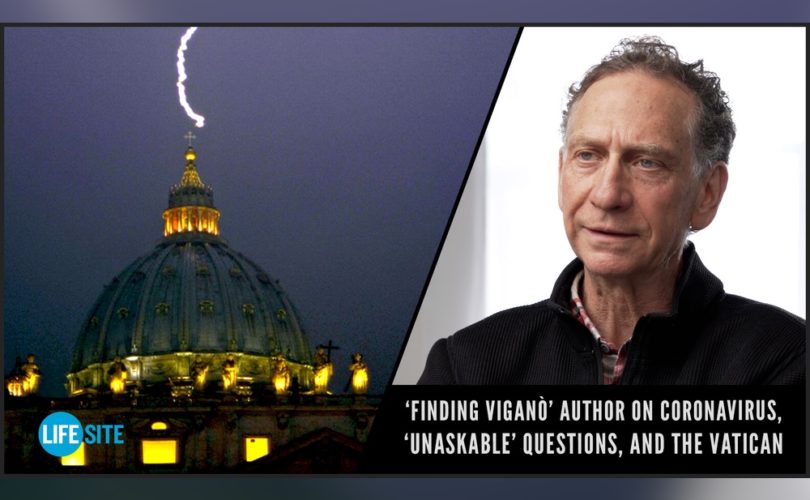 May 12, 2021 (LifeSiteNews) — Robert Moynihan, editor-in-chief of Inside the Vatican magazine and author of a new book about Archbishop Carlo Maria Viganò, granted LifeSiteNews an exclusive interview during which he spoke about the coronavirus and its devastating impacts on Catholic life around the world.

In the process of writing Finding Viganò: The Man Behind the Testimony that Shook the Church and the World, Moynihan travelled to the undisclosed location where the whistleblower archbishop now lives. He described Viganò as “a man of prayer” and “regular routine” whose skill at accounting helped him to notice irregularities in Vatican finances when he oversaw parts of them.

“He’s a great man for handling meticulous details of a desk job.”

“He likes the truth, and was in particular oriented toward clarity and transparency in accounting,” explained Moynihan. When Viganò tried to clean up the parts of Vatican finances that he was tasked with overseeing, Pope Benedict XVI was pressured to have Viganò transferred to the U.S., where he then served as apostolic nuncio from 2011 to 2016.

It was in the summer of 2018, after Viganò’s retirement, that the archbishop released his bombshell testimony about sexual abuse and cover-up in the Church, revealing that the now-laicized ex-Cardinal Theodore McCarrick had a long history of sexual predation, and numerous high-ranking prelates, including Pope Francis, knew about it.

Now, the archbishop writes prolifically about the coronavirus and the Catholic Church’s response to it, as well as other ecclesiastical concerns such as the Vatican’s recent “health” conference featuring America’s pro-abortion lockdown czar Dr. Anthony Fauci; the ban on private Masses in St. Peter’s Basilica that effectively prevents the Traditional Latin Mass from being offered there because priests are forced to concelebrate Mass instead, which can only be done in the Novus Ordo; our new “pseudo-health regime” and the World Economic Forum’s intended “Great Reset”; and Fratelli tutti.

Viganò is “persuaded that we’re in a very dangerous time,” explained Moynihan. Some people have been disappointed that the archbishop has become so concerned about seemingly worldly matters, like the coronavirus and the worldwide response to it, but Viganò “feels that there’s a spiritual element behind them.”

“I’ve even said to him, ‘We have to be careful, or you’re going to lose the credibility that you’ve built up as a figure in the Church by trying to deal with these matters outside the Church,’” said Moynihan. But he recalled that Viganò responded, “‘It’s so important.’ He said [there are] many, many people who might die, and there [are] many people who might be enslaved. And the whole fate of the Church, and the teaching of the faith, depends on how we meet this crisis.”