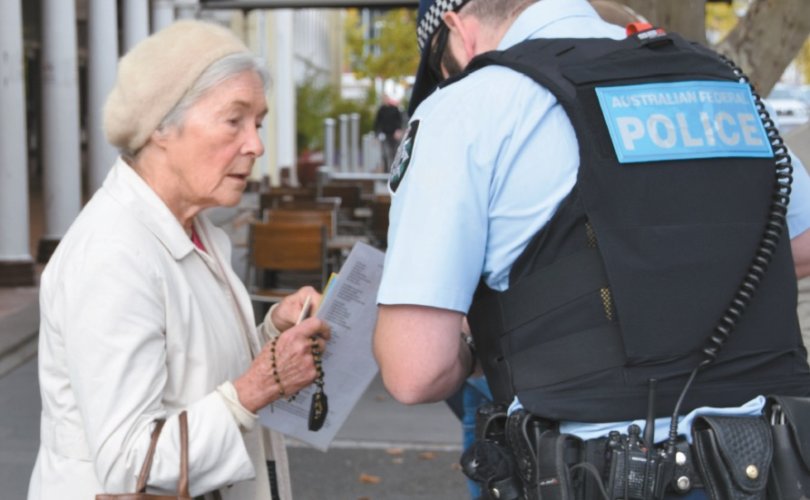 One of the pro-life vigil keepers who received a police warning outside a Canberra abortion facility on April 15.Matthew Biddle / Catholic Voice

CANBERRA, Australia, May 3, 2016 (LifeSiteNews) – The first pro-lifer fined by police in the Australian Capital District (ACT)  for violating its new buffer zone designed to protect abortion clinic customers from pro-life messages, religious symbols or pamphlets says he won’t pay the $750 and will see the police in court.

75-year-old Kerry Mellor, like the seven other Catholics warned away from the abortion facility in the ACT Health Building in downtown Canberra, carried no signs nor pamphlets aimed at pregnant women. Their crime was praying 15 decades of the Rosary, comprising 150 Hail Marys, and 15 Lords’ Prayers interspersed with meditations on the lives of Jesus and Mary.

According to the Catholic Voice, the official newspaper of the Canberra Archdiocese, the others left when warned by police, but Mellor decided to stay. “We do not believe we are protesting,” Mellor told the newspaper. “We are praying, which is directed exclusively to almighty God and his Blessed Mother. It’s not a protest, it’s a petition that God will act to change the hearts and minds of people.”

But Mellor insists he and his companions were not protesting, obstructing or directing any messaging to anyone but God. “It’s also an ancient tradition to pray for the dead, including the innocents killed here. We pray for their souls, and we make a small act of reparation for this horror committed in our midst, in our community.”

Mellor told the Catholic Voice he had “made a formal request that the charge be withdrawn, on the basis that our quiet prayer cannot possibly be interpreted as any of the types of ‘prohibited behaviour’ in the legislation. I’m awaiting the outcome.”

Pro-abortion groups claim the pro-life presence leaves clinic customers feeling “ashamed and judged.” But pro-life vigils have been maintained outside the ACT Building for 17 years, without any charges being laid for breaches of the peace.