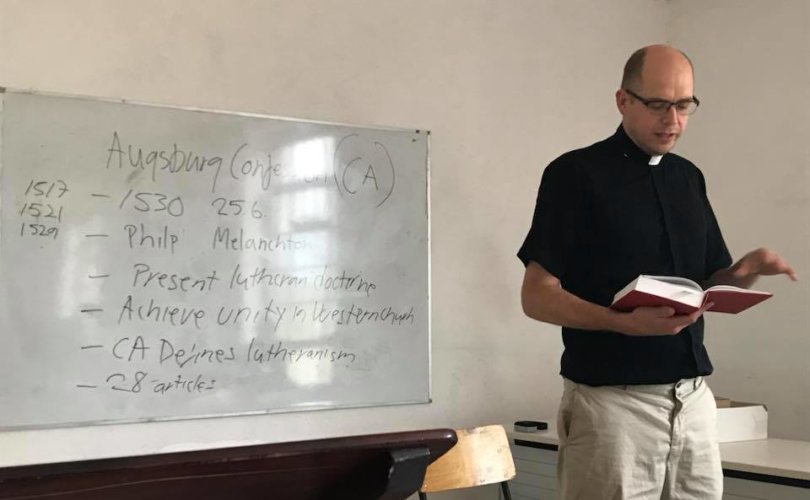 HELSINKI, Finland, February 5, 2020 (LifeSiteNews) – The Evangelical Lutheran Mission Diocese of Finland is under investigation by the country’s Prosecutor General over publication of a booklet upholding Christian teachings on human sexuality that calls homosexuality a “disorder.”

Juhana Pohjola, a cleric and dean of the mission diocese, is accused of incitement to hatred against a group and has been summoned to the Helsinki Police Department for a preliminary investigation on Tuesday, February 11.

As the editor-in-chief of the publishing branch of Lutheran Foundation Finland, which includes maintenance of its website, Pohjola is at the center of the investigation.

In 2004, the foundation published a small book called “Male and Female He Created Them – Homosexual relationships challenge the Christian concept of humanity.” The mission diocese reported on its website that Pohjola “is under suspicion for distributing this material to the public and for keeping this material available online.”

In the fall of 2019, Prosecutor General Raija Toiviainen ordered an investigation. Her appointment to that position only one year before might explain the fact that an investigation regarding the book was ordered 15 years after its initial publication.

Speaking with the International Lutheran Council, Pohjola declared, “The decision of the Prosecutor General to conduct a preliminary investigation of our publication is surprising, as I believe the police have already thoroughly investigated and concluded that this is not a criminal offense.”

He continued, “It is our job to teach the entire word of the Bible in peace, including on marriage as created by God.”

The book, including its English version, is still available on the website of the Lutheran Foundation. Written by Päivi Räsänen, a Finnish member of parliament for the Christian Democrats, the book states, “Homosexual relationships are clearly considered against the sexuality that was created by God, not only in the Old Testament but even more powerfully in the New Testament.”

While “Male and Female He Created Them” is a Biblically-based book, it does not leave out a discussion of natural law, “The further society disengages from Christian ethics, the greater becomes the necessity to examine the inferences of natural moral law by the special revelation, i. e. in the light of the Word of God. As a result of the Fall into sin, humanity has become morally corrupt, and therefore has a propensity to twist the natural moral law to fit its own selfish interests.”

In 2017, homosexual partnerships were considered “marriage” according to Finnish law.

“Instead, the scientific material unequivocally proves that homosexuality is a disorder of psycho-sexual development,” the book states.

On the push for homosexual couples to adopt and raise children, the author commented, “There is no known situation in the history of humankind where two women or two men were capable of reproduction. Thus, nature does not accidentally produce a child with two mothers or two fathers. Gender-neutral parenting is no substitute for the motherhood and fatherhood that is in accord with the order of creation.”

The book added that there is no human right to having children. On the other hand, Räsänen maintained, “children should have the right to both parents, a mother and a father, in their daily lives.”

Months ago, Räsänen was under investigation by Finnish authorities herself on her tweet that criticized the Evangelical Lutheran Church of Finland, which is different from the conservative mission diocese, for participating in a “pride” event celebrating homosexuality.

In an interview with Rod Dreher, she told of being “interrogated for almost four hours concerning this tweet.”

Räsänen also explained, “The law does not prohibit this, and it is legal to speak and preach about what the Bible teaches. Freedom of religion is strongly guaranteed both in our Constitution and in the International Human Rights Treaties.”

At the same time, talking about certain issues, for instance, the sinfulness of homosexual acts, is considered to be politically incorrect and frowned upon.

Asked about the future of Christianity in Finland, Räsänen said, “In my opinion, it is specifically Christianity that is being attacked and will be attacked even more aggressively in the future. We are clearly living in a time when the core of the Christianity is being questioned.”

However, she expressed hope that police investigations and a climate of political correctness “won’t lead to self-censorship among Christians.”