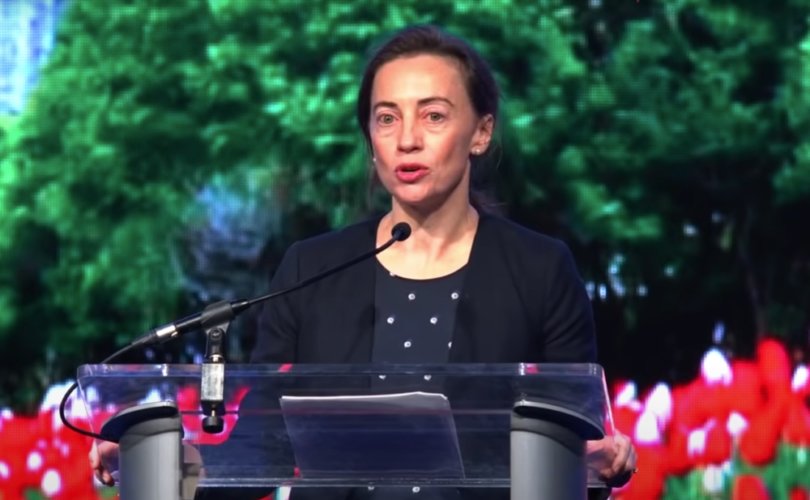 Dr. Ponesse has a background in ancient philosophy, specializing in ethics, and told the crowd during a speech that lasted almost 20 minutes to “not give up your rights.”

The Brownstone Institute transcribed the speech, which is also available to watch as a video.

Dr. Ponesse began the speech by asking the audience to think back to the time before lockdowns were implemented. She asked the audience, “What were you doing then? What was your life like? What did you care about? … What did you imagine about the future?

She told the audience that the person we were pre-2020 is the person she wanted “to talk to” for the duration of her speech.

For 20 years as a professor, she emphasized “critical thinking” and “the importance of self-reflection,” as well as “why democracy requires civic virtue.” In September, she said she “received a ‘termination with cause’ letter” after she questioned and refused to comply with a vaccine mandated at Huron University College in London, Ontario.

She stated she was “dismissed for doing exactly what I had been hired to do … a professor of ethics questioning … and unethical demand.” The audience laughed as she said, “you don’t have to look very hard to see the irony.”

It was Dr. Ponesse’s contention that Canada is a nation “governed by laws which are based on ethics.” She called ethics “the bedrock” of democratic principles in Canada.

In Ponesse’s original video that went viral, she appealed to what amount to natural law principles of bodily autonomy and the right for a person to reject medical interventions that they believe will violate their bodily integrity. In her speech, she stated, “Each person’s body is considered inviolate in Canadian law,” and added that “this is the underlying ethos of the Nuremberg Code, a promise to humanity that we would never again endorse uninformed, non-voluntary medical decision-making, even for the patient’s own good, even for the sake of the public good.”

She called vaccine mandate orders by employers a method of “holding our careers hostage,” and described mandates as “coercive immunization strategies.”

Dr. Ponesse opined about a hypothetical scenario wherein the Canadian government has a “limited power to pass laws that violate certain Charter rights for the sake of the public good.” She added that in order for this to be justifiable, the current violations would “need to meet a very high threshold: COVID-19 would … need to be a highly virulent pathogen for which there is no adequate treatment, and the vaccines would need to be demonstrably effective and safe.”

She then called into question the safety of the current jab offerings, which have been responsible for “more adverse events, including innumerable deaths, than every other vaccine on the market over the last 30 years.” And, she illuminated the numerous safe and effect anti-viral medications that have been used successfully by numerous physicians, such as ivermectin, Vitamin D and Zinc.

The fact that the infection fatality rate is “not even 1 percent that of smallpox,” and that various non-vaccine medications exists, is reason enough for the ethicist to call the current restrictive measures “unethical.”

She also posed a series of questions to the audience about what she considers to be inconsistencies surrounding the COVID narrative. “Why are the vaccinated granted vaccine passports and access to public spaces, when the director of the CDC has stated that the COVID-19 vaccines cannot prevent transmission?” she asked. “Why is vaccination the ONLY mitigation strategy when emerging evidence (including a recent Harvard study) shows no discernible relationship between the vaccination rate and new cases?”

Canada is set to employ a mass-vaccination effort of small children with the experimental abortion-tainted jabs, which Ponesse strongly questioned due to the very small “risk to children.”

After poking holes in the entire COVID narrative and the rationale behind the Canadian government’s response to the virus, she sought to embolden the audience to know where to “draw the line” when it comes to personal freedoms and rights.

She called to mind the “harms of the last century – the ‘final solution,’ South African apartheid, the Rwandan and Cambodian genocides,” all of which are events that she believes are not unrelated to the type of segregation now in place in Ontario and other parts of Canada between the “vaccinated” and “unvaccinated.”

She called on Canadians to view the current situation as a type of “war” where “we are the victims – and the soldiers – of a pandemic of compliance.”

In order to recapture constitutional freedoms, she implored those in attendance to “challenge and even disobey our government.”

She finished the speech with a call to arms by asking the audience for a “favor.” “We need heroes now more than ever,” she said. “Our democracy is asking for volunteers … Will you be a hero, for our country, for our children?”