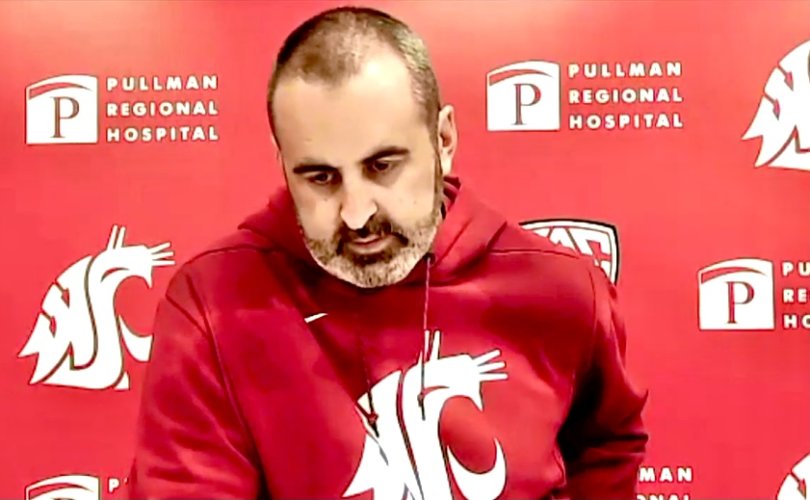 (LifeSiteNews) — Washington State University will soon face a lawsuit after it fired a devout Catholic football coach for choosing not to get vaccinated with a COVID shot.

Rolovich had previously said he would not get vaccinated for undisclosed reasons, though his attorney told ESPN that his client’s Catholic faith has led him to choose not to get the shots.

“I have elected not to receive a COVID-19 vaccine for reasons which will remain private,” Rolovich said July 21. “While I have made my own decision, I respect that every individual — including our coaches, staff and student-athletes — can make his or her own decision regarding the COVID-19 vaccine.”

His decision now appears to relate to his Catholic faith. All of the currently available COVID shots are abortion-tainted.

“[Athletic Director Pat] Chun’s animus towards Coach Rolovich’s sincerely held religious beliefs, and Chun’s dishonesty at the expense of Coach Rolovich during the past year, is damning and will be thoroughly detailed in litigation,” attorney Brian Fahling told ESPN on October 20. “Chun’s discriminatory and vindictive behavior has caused immeasurable harm to Coach Rolovich and his family.”

“It is a tragic and damning commentary on our culture, and more specifically, on Chun, that Coach Rolovich has been derided, demonized and ultimately fired from his job, merely for being devout in his Catholic faith,” Fahling said.

Chun said the mandates were clear to all employees.

“He was resolute in his stance and his right to make a choice. That choice did not put him in compliance with this proclamation from the governor, and that is why we sit here today,” Chun told ESPN.

June Jones, Rolovich’s former college coach, tried to pressure his former quarterback into getting jabbed. “He believes the way he believes, and he doesn’t think he needs it. It’s like I told him: It’s not about him anymore,” Jones told USA Today.

“It’s about the people around you and the credibility of the university, and he’s got to take one for the team,” Jones, the former University of Hawaii coach, said October 9.

The Congregation for the Doctrine of the Faith, a Vatican department, said  COVID shots must be “voluntary.” While Pope Francis referred to inoculation as an “act of love,” Catholics are not bound to follow his statement, made during a public service announcement, as binding moral guidance.

Archbishop for the Military Services Timothy Broglio confirmed on October 12 that “no one should be forced to receive a COVID-19 vaccine if it would violate the sanctity of his or her conscience.”

Bishop Joseph Strickland said August 31 that Catholics should say “no to mandates.”

State jab mandate led to the death of a young mom

Gov. Inslee’s executive order has led to protests and other pushback. He added education employees on August 18 to his original August 9 order that applied to other state workers, contractors and volunteers.

“1,887 Washington state employees and healthcare workers have thus far been forced out of their jobs” as of October 21, LifeSiteNews reported.

The school jab mandate has at least one confirmed death, after a healthy mother of two died from taking the shot.

“Jessica Berg Wilson, 37, of Seattle, Wash., passed away unexpectedly Sept. 7, 2021 from COVID-19 Vaccine-Induced Thrombotic Thrombocytopenia (VITT) surrounded by her loving family,” an obituary read. Wilson did not want to take the COVID-19 inoculation but did so because the state of Washington requires school volunteers to be fully jabbed.

Twitter initially labeled the posts sharing the obituary as “misleading.”