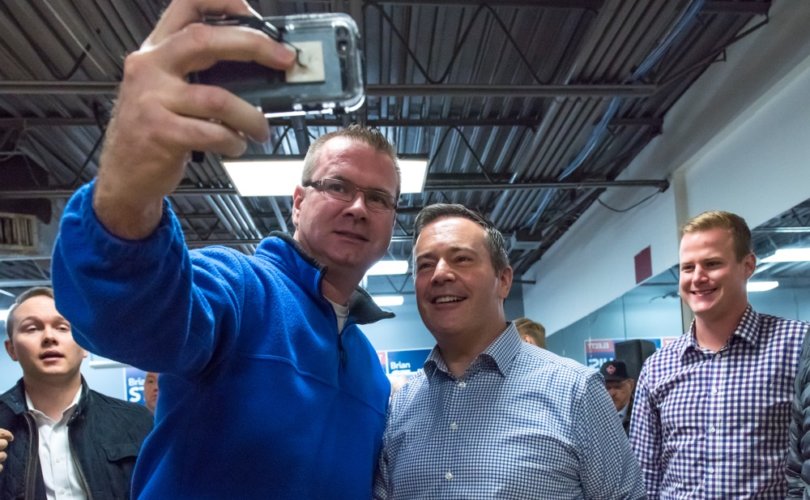 EDMONTON, Alberta, May 8, 2020 (LifeSiteNews) — Alberta is the first Canadian province to launch a coronavirus contact tracing application. Since launching a week ago, the app has been reportedly downloaded by voluntary users more than 120,000 times, which would amount to about 3 percent of the province’s population of four million.

According to the government of Alberta’s website, “[i]f you're exposed to COVID-19, Alberta Health Services (AHS) will use information from ABTraceTogether to contact you on the number you used to register your account. AHS contact tracers will tell you about your risk of exposure and the actions you should take.”

“If you get COVID-19, you'll be asked to volunteer your ABTraceTogether logs so other users that you've had close contact with can be notified,” the website states.

“The more Albertans who voluntarily download and use the app, the safer we'll be, and the faster we can reopen the economy,” the website adds.

“We want to know if that person’s actually going to go home, and stay home and if not, we can deal with that individual before they spread the virus,” Kenney said on April 8 in the Alberta Legislature.

Jay Cameron, a lawyer for the Alberta-based Justice Centre for Constitutional Freedoms (JCCF), told LifeSiteNews that the legal group is closely keeping an eye on government-issued contact tracing apps.

Earlier in the month, Cameron told LifeSiteNews that observing people via a smartphone app constitutes a search.

Although Alberta is the only province with a contact tracing app thus far, Manitoba, New Brunswick, Newfoundland and Labrador, and Saskatchewan are in the planning stages of potentially launching their own.

Quebec has said it will not use such technology, despite being the province hardest hit by the coronavirus. British Columbia says they are not launching a contact tracing app as part of their coronavirus strategy.

Ontario officials also say they are not looking into a contact tracing app yet, but the premier of Ontario, Doug Ford, said this past Monday that “[w]e need a national plan for contact tracing.” He did not say if this would include an app.

A contact tracing app, on the other hand, uses the Bluetooth signal from a person’s cell phone, or other devices with the app installed, to track whom its user has been in close contact with.

The ABTraceTogether app works by storing information from users of the app on each other’s phones if they have been in the proximity of one another (around two meters) for more than 15 minutes. Data are stored for 21 days.

Although the app is voluntary and does not store a person’s exact location as it does not use GPS, a user still needs to provide AHS with his phone number to register for an account.

If a user of the app tests positive for coronavirus, AHS will contact that person and ask him to voluntarily share his app data with AHS. AHS will then contact anyone who has the app installed on his phone and was close to that user in a certain time frame and urge any such people to get tested.

Canada’s privacy commissioner, Daniel Therrien, has given the federal government a framework to use regarding contact tracing apps but said earlier this week that he has yet to hear back from the government regarding his framework.

In a clip from a 2010 National Film Board documentary called Outbreak, Dr. Theresa Tam, Canada’s chief medical officer, said that to enforce quarantine orders you “could track people, put bracelets on their arms.”

Tam has direct ties to the World Health Organization (WHO). She is one of seven people who sit on the Independent Oversight and Advisory Committee for the WHO Health Emergencies Programme (IOAC).

Recently, pro-life Conservative M.P. Sloan sparked a media frenzy for saying in a letter and video that Tam should be fired for her coronavirus response. Many demanded that he should apologize, but Sloan refused and stood by his comments.

John Carpay, president of the JCCF, said Bill 10 takes away the electorates’ constitutional right to have their elected representatives be involved in the law-making process.

“Bill 10 is a betrayal of the electorate and of the rule of law,” said Carpay in the JCCF news release regarding the legal action.

Cameron told LifeSiteNews two weeks ago about his concerns regarding Bill 10.

“Because there is no limit on this power apart from prohibiting the unilateral creation of new taxes, it opens the door to the near limitless use of power and therefore widespread abuse of civilians,” said Cameron.

A JCCF analysis of Bill 10 says it gives the Alberta government and its ministers too much power.

Kenney recently said he hopes to revise the “concerning” parts of Bill 10, but he has not yet done so.

Whistleblower Edward Snowden warned that authorities around the world are exploiting the pandemic to increase surveillance and track individuals. Digital rights group Top10VPN recently warned that governments worldwide are working with big tech firms to develop software that uses people’s smartphones as a tracking application for health authorities.