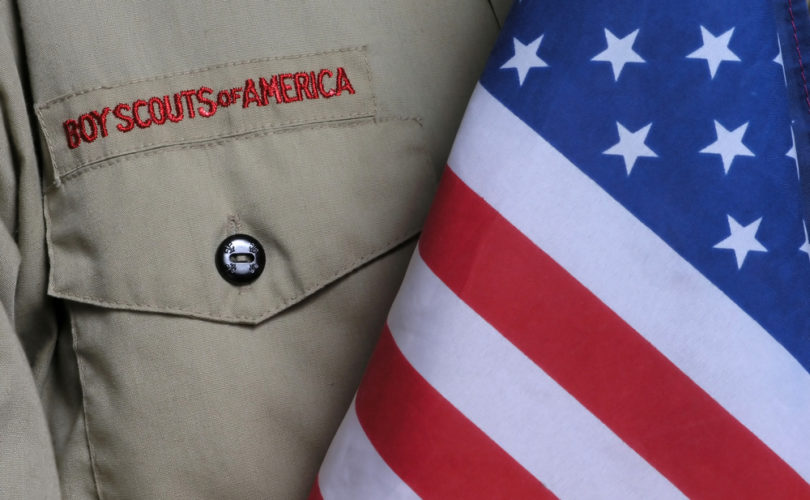 LOUISVILLE, KY, August 18, 2015 (LifeSiteNews) — The Archdiocese of Louisville has rejected a homosexual man’s application to be a Boy Scout leader, the first reported diocese to do so after the national organization opted to allow gay leaders, resulting in threats of public protests.

Greg Bourke reapplied to lead Boy Scout Troop 325 in his home parish of Our Lady of Lourdes Catholic Church in Louisville where he’d been required to resign in 2012 after announcing his sexual orientation, according to Religion News Service, but was informed early this month his application was denied.

“My heart is broken that my church would now present the barrier to my returning to my Boy Scout unit,” Bourke said.

Bourke, who along with his partner were among the plaintiffs in the U.S. Supreme Court decision legalizing homosexual “marriage” across the U.S., said he doesn’t have any legal recourse to contest the archdiocese’s denial of his application, according to Insider Louisville, but implied he would publicly hold Archbishop Joseph Kurtz responsible.

“The thing I can do is take them to the court of public opinion, and I think he’s going to lose that battle,” Bourke said. “Clearly we have to draw attention to the Archdiocese, and specifically Archbishop Joseph Kurtz for making this decision, which was really unnecessary and I think quite mean-spirited.”

The Boy Scouts of America announced July 27 the organization was removing the national restriction on openly gay adult leaders and employees effective immediately.

In the announcement the Scouts said individual troops could still pick their own leaders and that religiously-affiliated troops can use their beliefs as criteria for leader selection.

The Boy Scouts decided in 2013 to end its ban on homosexual members after years of pressure from homosexual advocates and corporate sponsors, with that policy going into effect in the following year.

The National Catholic Committee on Scouting (NCCS), which works with the Boy Scouts and fosters the relationship between the Scouts and the Catholic Church in the U.S., including working with the United States Conference of Catholic Bishops (USCCB), expressed “strong concern about the practical implications” of lifting the ban on homosexual leaders, but still called on Catholic chartered groups not to leave the Boy Scouts.

“We’re willing to see how this policy can work and how we can remain consistent with our Catholic teaching and continue to charter troops with the Boy Scouts of America,” said Charleston Bishop Robert Guglielmone, who sits on the NCCS executive board. “We think we can do that.”

While most Catholic leaders have remained hopeful that Catholic-chartered Boy Scout troops will be able to continue operating with Catholic principles, the Boy Scouts did not mention protection for religious groups from being forced to accept a homosexual leader in its announcing acceptance of gay leaders at the national level.

The absence of protection was enough for Bishop David Kagan of Bismarck, North Dakota to cut ties with the scouts.

Bishop Kagan removed all diocesan organizations from the Boy Scouts August 3, and said in a statement that the Scouts’ decision to allow openly gay adults into leadership positions had been foreseen, and that the religious exemption in the Scouts’ resolution fell short in providing the needed protection for Catholic entities that sponsor troops.

He regretted having to make the decision, the bishop said, yet, “in conscience as the Chief Shepherd of the Diocese of Bismarck, I cannot permit our Catholic institutions to accept and participate directly or indirectly in any organization, which has policies and methods, which contradict the authoritative moral teachings of the Catholic Church.”

The Archdiocese of Louisville said in regard to Greg Bourke that it does not discuss the pastoral situations of individual parishioners with the media, but sent a statement to pastors the week before:

[The Catholic Church has] both the right and the responsibility to choose leaders whose character and conduct are consistent with Church teaching. All pastoral leaders in these ministries should be able to provide a credible and integrated witness in their lives to the teachings of the Catholic Church, including its teachings on marriage, sexuality and chastity.

Archdiocesan spokesperson Cecilia Price also told Insider Louisville, “It is important to note that the fact that individuals identify themselves as a person with same-sex orientation does not necessarily exclude them from volunteering for the Church,” but the concern lies with such a person’s “ability to provide a credible witness to Church teaching.”

Price cited Church teaching about marriage, sexuality and chastity which are “based upon both Scripture and the 2000-plus year tradition of the Church,” and provided links to relevant sections of the Catechism of the Catholic Church.

Homosexual advocacy groups Fairness Campaign and Catholics for Fairness plan to protest the archdiocese for denying Bourke’s application as a Boy Scout leader.