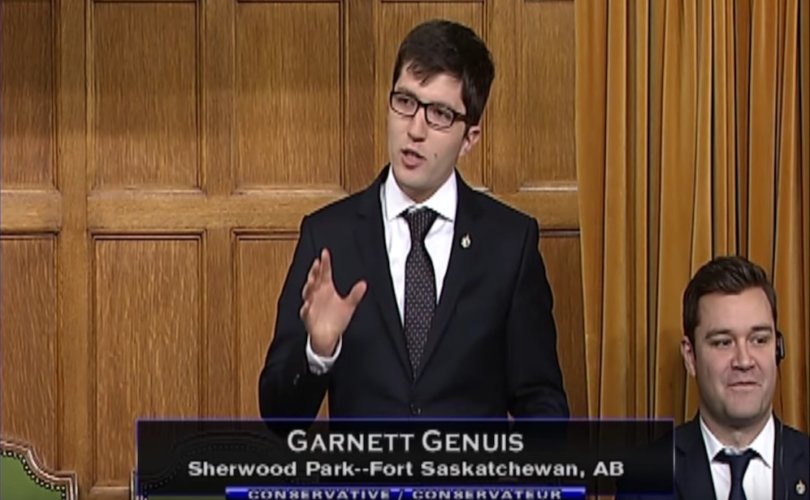 'Without amendments, this bill will protect no one,' Conservative MP Garnett Genuis warned in today's debate.

OTTAWA, April 22, 2016 (LifeSiteNews) — Conservative and New Democrat MPs slammed the Liberals’ Bill C-14 during a second reading debate Friday that was dominated by criticism of the bill’s lack of conscience rights protection, ambiguous language, and failure to conform to the Supreme Court’s Carter decision.

Liberal Justice Minister Jody Wilson-Raybould and Health Minister Jane Philpott defended the bill, giving no sign that they would support an amendment to protect conscience rights.

Wilson-Raybould said the Canadian Medical Association endorsed the bill without raising questions about conscience rights, while Philpott noted that “we need to make sure conscience rights are protected, but we also know that Canadians need to have access to this care.”

“We consider this medically necessary options at the end of life,” she added.

Both ministers said the Liberals will be setting up a national coordinating system to “link patients to willing providers,” as Wilson-Raybould put it.

Introduced April 14, Bill C-14 is intended to replace the law against assisted suicide and euthanasia which the Supreme Court’s February 2015 Carter decision struck down as unconstitutional. That ruling takes effect June 6.

The Liberals’ draft bill restricts euthanasia and assisted suicide to competent persons aged 18 and over who are suffering intolerably from a serious and incurable illness or disability, are in a state of irreversible decline, and whose natural death is reasonably foreseeable.

But it has come under fire from both pro- and anti-euthanasia MPs.

Alberta Tory MP Garnett Genuis, Sherwood Park-Fort Saskatchewan, blasted the legislation for its “comically ridiculous exceptions to exceptions,” stating that “without amendments, this bill will protect no one.”

One egregious example is the bill’s Section 227.3, which states that having “a reasonable but mistaken belief” a person is eligible for assisted suicide or euthanasia is sufficient grounds to escape prosecution, Genuis said.

This could result in the euthanizing of a non-consenting patient and the perpetrator then claiming to have had a “reasonable but mistaken belief” that the person had indeed consented.

“I implore the government to take this out,” said Genuis.

The justice minister had stated both that “it is not necessary that the person be terminal,” to be eligible for assisted suicide or euthanasia, and that the Liberals “do not promote premature death,” said Reid.

Wilson-Raybould countered that the “flexible wording” of the phrase was “deliberately chosen,” so that the two authorized medical practitioners the bill stipulates must approve a person’s request for assisted suicide or euthanasia would have wide latitude to do so.

“We purposely provided flexibility to medical practitioners,” she said.

Alberta Conservative MP Michael Cooper, St. Albert-Edmonton, said that while in his view the bill has “satisfied the parameters of the Carter decision” it is also “significantly flawed.”

Cooper was a member of the special joint parliamentary committee tasked with providing a legislative framework for the government.

That report recommended a wide-open euthanasia regime, including euthanasia for mature minors, for mental illness alone, and that people with degenerative diseases such as dementia could issue advance directives to be euthanized at a future date.

The committee also recommended objecting physicians be compelled to provide an effective referral, and that publicly funded institutions be forced to provide assisted suicide and euthanasia.

“I believe the government of Canada has a duty to protect the conscience rights of physicians and allied health care workers,” Cooper said, and Bill C-14 “falls short” by not doing so.

Freedom of conscience and religion are protected under Section 2 of the Charter and are “fundamental rights,” he said, and can be protected by adding a “simple amendment” to the legislation.

Canada has a precedent in its 2005 Civil Marriage Act, Cooper said, which contains a section exempting those who object on religious grounds from cooperating with same-sex “marriage.”

Conservatives Reid, Genuis, and Deltell also raised the issue of protecting conscience rights of healthcare workers who object to any involvement with assisted suicide and euthanasia.

Philpott said that this “falls into care of provinces” but Genuis pointed out that the College of Physicians and Surgeons of Ontario has issued guidelines that mandate physicians provide an effective referral.

“I do see a need for consistency,” noted Cooper.  “That can be done with a simple amendment.”

The Supreme Court recognized in Carter that “healthcare is an area of concurrent jurisdiction” of the federal and provincial governments, he noted.

Cooper also faulted the bill for not sufficiently protecting people who have an underlying mental illness, and said that in such cases, C-14 should mandate a psychiatric assessment of an individual’s competence in requesting to be killed by medical means.

A member of the special parliamentary committee, Rankin said the bill was more restrictive than the Supreme Court intended and constitutional experts have told him it will not withstand a Charter challenge.

He asked Wilson-Raybould if she would consider sending the bill to the Court for approval, but the justice minister said to do so would be “premature” and that the Liberals were “confident” the bill conformed to the Carter decision.

Rankin also faulted the Liberals for not opening up euthanasia to mature minors or for mental or psychological suffering alone, and for nixing advance directives, all contrary to the committee’s recommendations.

Wilson-Raybould that the Liberals will study these “three key issues Carter did not address” and review the legislation in five years.

“Medical assistance in dying poses a real risk,” she said. “We don’t want death as a solution to all suffering.”

As the House of Commons is adjourned next week, debate on Bill C-14 will resume May 2.