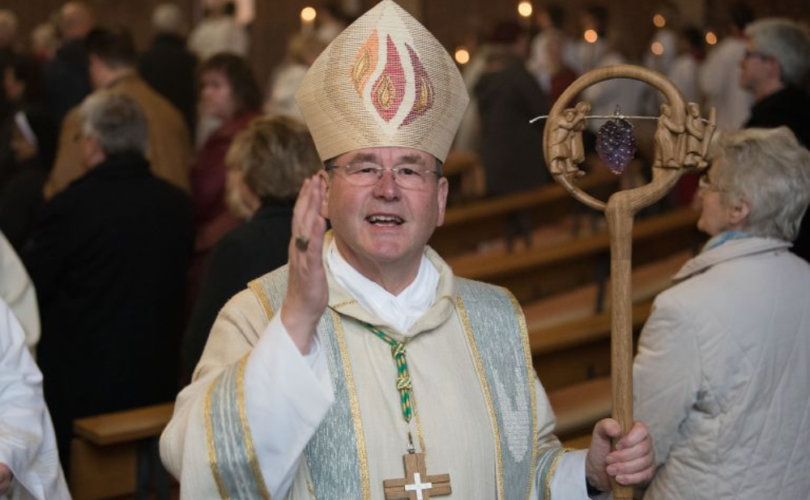 ESSEN, Germany (LifeSiteNews) – An auxiliary bishop has become the first German Catholic bishop to be present at the blessing of a homosexual couple despite the Vatican banning such blessings last year.

German Catholic news site Katholisch reported that on May 10 Bishop Ludger Schepers, the auxiliary bishop of the Diocese of Essen, was present at a same-sex blessing, reportedly becoming the first Catholic bishop in Germany to do.

The event was part of a coordinated movement called “#liebegewinnt,” or “love wins,” which was planned around 80 same-sex blessing events around May 10 across Germany. Katolische did not specify where Bishop Schepers was present, although it likely could have been that he attended a 7 p.m. ecumenical same-sex “blessing” event held in Essen Cathedral and promoted by the diocese.

LifeSiteNews contacted the diocese seeking more information but was unable to reach a spokesman.

The date for the “blessing” was specifically chosen since, as the pro-LGBT activists wrote:

according to the ecumenical lexicon of saints, May 10th is one of the commemoration days of Noah. He is the progenitor of all generations in the Bible. God sent him the rainbow as a sign of his covenant. The name Noah means translated: the bringer of peace, the comforter. By the way: In the Catholic calendar of saints, May 10th is the memorial day of Saint Damain De Veuster. He is the patron saint of AIDS patients.

The movement is built on the back of a May 10, 2021 event, when more than 500 Catholic priests held over 110 “blessings” for same-sex couples in a direct protest against the Vatican’s ban on such blessings.

On March 15, 2021, the Congregation for the Doctrine of the Faith released a declaration that the Church cannot bless same-sex relationships since God “does not and cannot bless sin.” The CDF stated that it is “not licit to impart a blessing on relationships, or partnerships, even stable, that involve sexual activity outside of marriage (i.e., outside the indissoluble union of a man and a woman open in itself to the transmission of life), as is the case of the unions between persons of the same sex.”

The “Love wins” movement was born in direct opposition to this pronouncement by the CDF, with the LGBT activists stating:

In view of the Congregation for the Doctrine of the Faith’s refusal to bless homosexual partnerships, we raise our voice and say: We will continue to accompany people who enter into a binding partnership and bless their relationship. We do not refuse a blessing celebration. We do this in our responsibility as pastoral workers who promise people the blessing that God alone gives at important moments in their lives. We respect and appreciate their love and believe that the blessing of God is upon them. Theological arguments and gains in knowledge are sufficiently exchanged. We do not accept that an excluding and outdated sexual morality is carried out on the backs of people and undermines our work in pastoral care.

Bishop Schepers, 69, is no stranger to promoting the LGBT movement. In February 2021, he wrote a foreword to Bishop Peter Kohlgraf’s book containing blessings and rites for same-sex unions.

Schepers is part of the Pastoral Commission of the German Bishops’ Conference and has charge of the LGBTQ program. In this capacity, he supported a recent movement called “#OutInChurch” for LGBT employees of the Church in Germany and encouraged LGBT individuals to promote the ideology within the Church.  “A church in which one has to hide because of one’s sexual orientation cannot, in my opinion, be in the spirit of Jesus,” he told Katolisch.

He also responded in the affirmative when Katolisch asked if he believed “the public blessing of homosexual couples should be possible.”

Speaking at a 2016 “gender issues” in Stuttgart, Schepers called upon the Catholic Church to acknowledge “that there exists more than man and woman.”

Two years later, Scheper demanded the Catholic Church acknowledge “its history of guilt in the persecution and disregard of these people,” adding “gays are wanted by God, there is nothing to discriminate against.”

However, Catholic teaching on homosexuality states, “Basing itself on Sacred Scripture, which presents homosexual acts as acts of grave depravity, tradition has always declared that ‘homosexual acts are intrinsically disordered.’ They are contrary to the natural law. They close the sexual act to the gift of life. They do not proceed from a genuine affective and sexual complementarity. Under no circumstances can they be approved” (CCC 2357).

They were supported by Cardinal Gerhard Müller in 2021, who wrote how same-sex “blessings” are impossible, noting that “no other forms of living together can be blessed by the Church – if she remains loyal to her Divine Founder – except marriage and consecrated life.”