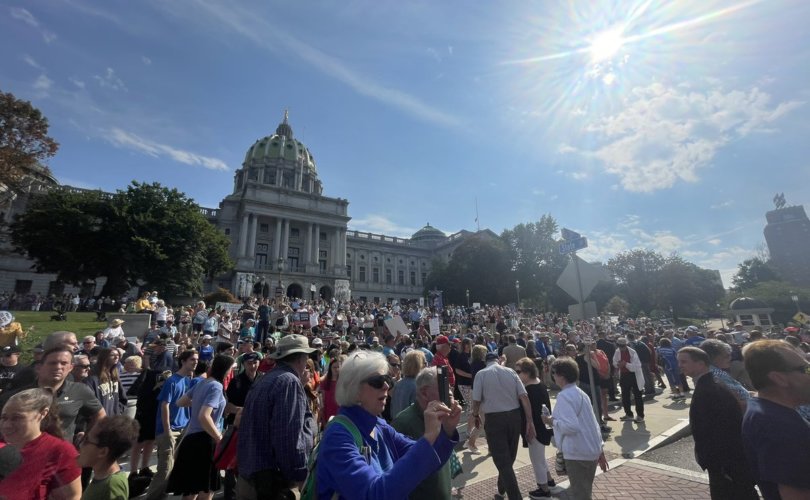 Pennsylvania March for Life at the state capitolTwitter

The March was held at the steps of the Pennsylvania state capitol, beginning with a rally. Speakers included Jeanne Mancini, president of the national March for Life; Ann McElhinney, producer and co-writer of the film “Gosnell – The Story of America’s Biggest Serial Killer;” and Philadelphia Archbishop Nelson Perez. The March was hosted by the Pennsylvania Family Institute of Harrisburg.

Many of the attendees were from church groups, especially Catholic parishes, and some were holding large crucifixes, WITF reported. Other attendees held signs that promoted adoption. According to the Pennsylvania Department of General Services, between 5,000 and 5,500 people attended the march, and was one of the largest recent gatherings to take place at the Pennsylvania State Capitol, PennLive reported.

Speaking to the crowd, Pennsylvania House Majority Leader Bryan Cutler, a Republican from Lancaster County, said, “I told you last year I felt changes were coming in our commonwealth … I don’t know that any of us anticipated how big a change that was.”

“We cannot take our momentum for granted,” Cutler continued. “This is not a time to let up. In the next several months, the men and women in this stage and those in Washington will likely find ourselves in some of the most important pro-life debates and votes that we will ever likely have the opportunity to make. We cannot make these votes without your support, your voices, your prayers. Your energy is crucial to keeping that momentum on our side.”

Referencing pro-life public officials in Pennsylvania, Michael Geer, president of the Pennsylvania Family Institute, stated, “Thankfully, we have strong pro-life leaders in our Pennsylvania General Assembly, many of them gathered here behind us.”

Noting that the Republicans hold both houses of the Pennsylvania legislature, Geer continued, saying, “A majority … That’s why the abortion industry is going to the courts, because they know that they can’t get it past these people.”

Several Pennsylvania Democrats held a press conference during the March to introduce a series of four bills that are designed to protect abortion and abortion providers in the state. The bills would offer protections to abortion providers, protect those seeking an abortion from prosecution, and expand the number of abortion providers.

The March comes as the November elections approach in a year when Pennsylvanians are set to elect a new governor and a new U.S. senator.

Pennsylvania’s current governor, radical pro-abortion Democrat Tom Wolf, has a history of defending abortion as well as other leftist policies. As per the Pennsylvania constitution, Wolf cannot run for governor this year because he has reached his term limit.

State Senator Doug Mastriano, the Republican candidate for governor, has defended the right to life in the past and has said he would sign a proposed heartbeat bill. He has also stated that he is in favor of a total ban of abortion from the moment of conception without the possibility of exception.

Pennsylvania Attorney General Josh Shapiro, the Democratic candidate for governor, has attended pro-abortion rallies during the campaign and said he would fight to keep abortion legal in the state.

Speaking to The Daily Signal at the march Monday, Mastriano addressed rhetoric from Democratic Senators Elizabeth Warren and Mazie Hirono with regard to pro-life pregnancy centers and pro-lifers, calling on them to stop using “awful rhetoric.”

Running for Senate in Pennsylvania are radical pro-abortion Democrat and current Lieutenant Governor John Fetterman, and Republican Mehmet Oz. Fetterman suffered a stroke earlier this year, leaving some to question his fitness for national office.

In order for the proposed amendments to reach Pennsylvanians for a referendum, they have to be approved again in the next session of the Pennsylvania legislature, which begins in January. If approved, the amendments will be up for a vote as early as next May.

Since the Supreme Court’s ruling, several states have introduced trigger laws that severely limit or ban abortion, though some are currently facing legal challenges.