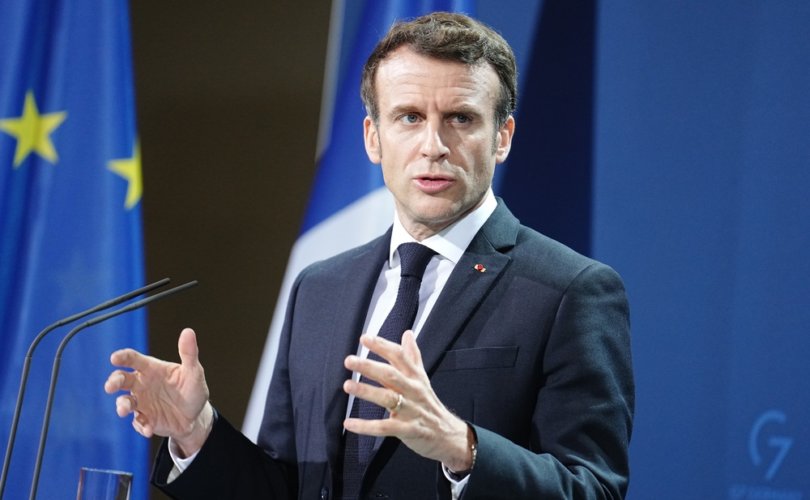 (LifeSiteNews) – French voters are called to the polls on Sunday for the first round of presidential elections that will have a major impact over the coming years. France’s sovereignty and its submission to the European Union, maintaining or not of COVID madness, insecurity, immigration policies, foreign policy, fiscal pressure, and spending power have been at the fore of a somewhat lukewarm campaign that was marked by the (provisional?) lifting of COVID restrictions but even more so by the war in Ukraine.

The latter was used as an excuse by outgoing president Emmanuel Macron to refuse all debates with his opponents. Credited with about 26.5 percent of the vote according to the latest opinion polls, in which he is generally presented as heading the field of 12 candidates, Macron held only one major rally at a venue with a maximum capacity of 30,000 people, the largest in Paris. It was far from full.

Under Macron’s five-year term France was deeply hurt by lockdowns and COVID restrictions, and mandatory vaccination was forced on health workers. Civil identity and the normal family were legally destroyed by giving lesbians access to fictional filiation, while changing names can now be done by simply filling a form. Access to abortion has been facilitated and Macron has even suggested calling it a “fundamental human right” under the European charter. Home-schooling is on its way to becoming next to impossible. (Mostly Islamic) immigration has reached a record high, with more than 1.5 million entries since 2017.

Macron made massive use of McKinsey, the global managing consulting company (that helped him win the 2017 election free of charge) to manage both reforms and the COVID crisis at a prohibitive cost. McKinsey was tasked with managing and promoting COVID-“vaccine” policy. This has turned into a public scandal and could weigh heavily on the election.

Macron’s eleven opponents include five left or extreme-left candidates, none of whom stand a chance except Jean-Luc Mélenchon, a very left-wing socialist or proto-communist, who was credited with 16.5 percent of voting intentions in the latest poll.

The institutional right-wing candidate is Valérie Pécresse, was credited with about eight percent. She favors same-sex “marriage,” abortion, and other pro-“LGBT” legislation. She voted for the vaccine pass and is expected to call her voters to choose Macron in the second round, which will oppose this Sunday’s winner and runner-up, if he passes.

Two of the three so-called “extreme-right” candidates, Marine Le Pen and Eric Zemmour, will probably make the difference. Zemmour, a former successful and highly cultivated journalist, has made the preservation of French identity and civilization his main theme, promising “zero immigration,” better security, and the return of freedom. He is presently fourth in the poll race with about nine percent of intended votes. He will not touch abortion laws or same-sex “marriage” but wants to reverse the law offering medically assisted procreation to lesbians.

Both he and Marine Le Pen have committed to reinstating the unvaxxed in their jobs in healthcare and elsewhere.

Marine Le Pen, who favors a number of left-wing propositions such as bringing legal retirement age back to age 60 and reintroducing the “wealth tax,” has also stressed that she will not touch “the right to abortion” nor the medically assisted procreation law, and has watered down her opposition to immigration, rejecting Zemmour’s plan to create “re-emigration” ministry to reduce the number of legal and illegal immigrants on French soil. Under pressure from Zemmour’s campaign, however, she has somewhat shifted her own positions right-wards. She is credited with 23 percent (some polls even see her beating Macron) and if the polls are correct she would be Macron’s opponent for the second time, as in 2017.

In that case Zemmour voters would probably support her, increasing her chances of reaching the Elysée, the French presidential palace.

Surprises can and do happen, however. And while Catholic voters are faced with a flawed choice, where no candidate is fully or openly supporting right to life, integral family values, and parental freedoms, five more years of Macron would almost certainly spell an even worse tyranny than we have had until now.