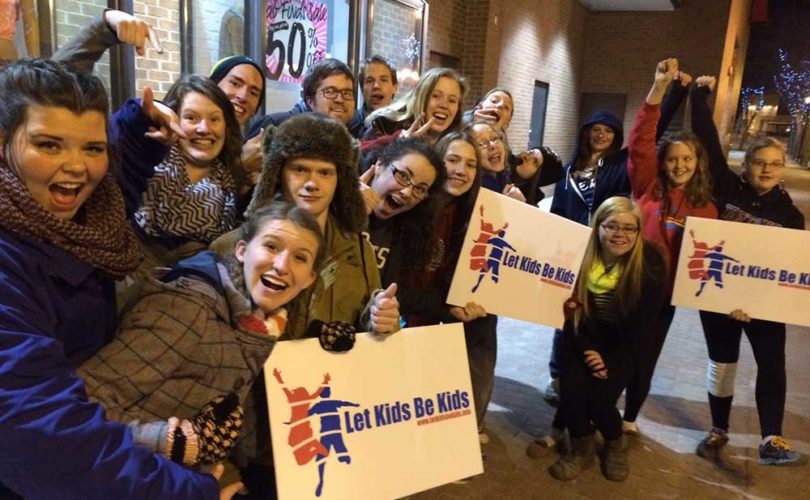 Jason Cartier led U-Turn teen ministry, The Underground, about to take to the streets of Chatham Kent to tell people why they don't want the Ontario Liberal government's sex-ed curriculum

ONTARIO, October 13, 2015 (LifeSiteNews) – Alain Achkar was getting his two children ready for school early in the morning of October 1 when a text came in from parents he knew through his Ottawa Maronite parish.

They said they were pulling their children out of school that day – as part of the province-wide strike organized by the parents’ rights organization, Canadian Families Alliance, to protest the Liberal government’s controversial sex-ed curriculum.

“I usually leave with my children at 7:30 a.m., so by 7:20 I had to make a decision,” the father of a five and seven-year-old enrolled in the Conseil d’Ecole Catholique du Centre-Est district school told LifeSiteNews.

“As a Catholic, I promised to bring up my children in the Catholic faith,” he added, “And I don’t want to expose them to anything that would be contradictory to my faith and their faith.”

Although the Lebanon-born Achkar had heard about the sex-ed curriculum on the news, “I just kind of thought there was nothing that people could do,” he said. “I’m not very activist.”

But since then, he had researched the curriculum on the Campaign Life Coalition website, and heard about the ongoing student strike in Toronto’s Thorncliffe Park.

That’s the Muslim neighborhood in Premier Kathleen Wynne’s Don Valley West riding where since September 8, a group of parents have been holding a student strike against the sex-ed curriculum, and have now vowed to keep their kids out for October with this singular determination inspiring the CFA’s October 1 province-wide strike.

So at the last minute, Achkar opted to stay home with his children.

“I am glad that I did it,” he said, “because for the first time in my life I am doing something, you know, taking a position, as a Catholic and as a citizen. I think I have a right to do it.”

Meanwhile, about 470 miles to the southwest, Phil Kraayenbrink of Port Lambton had also decided to keep his kids home from school that day.

But the October 1 student strike was far from the first protest the father of five had made against the sex-ed curriculum – nor the most radical.

“I was Protestant. Now I’m becoming Catholic,” Kraayenbrink told LifeSiteNews. And his mother and two sisters are doing likewise, he said, for the same reason. “All this is connected with the sex education.”

Kraayenbrink, who has enrolled his three daughters and two sons, aged from 12 to four, at Sacred Heart Catholic School, says the “only way to switch our money over and not fund” the public system “is to turn Catholic. And then our money goes to the Catholic schools, Catholic Church and we forget about the public system.”

Moreover, the power engineer, part-time farmer and captain of the Port Lambton volunteer fire department told town officials he will not pay the educational portion of his municipal taxes until he has it on paper that his money is going to the Catholic system.

“They said, ‘Well, how are you going to break it up? There’s no way to break it up, it’s just one payment,’ and I said ‘Well, I’ll break it up with bank payments’,” Kraayenbrink recalled.

“They told me, ‘Well, we can take your land,’ and I told them, ‘Not for three years. Legally, I will not be in the court system for three years.’” But as Kraayenbrink pointed out, he’ll pay up once his taxes are “swung over” to the Catholic system. “I have no problem in paying. But I’m not paying the public system. No way.”

Among his reasons for so adamantly rejecting the sex-ed curriculum is that the Liberal government “lied” about consulting parents, he said.

Indeed, sex-ed critics had long decried as risibly inadequate the Liberals’ online survey of 4,000 parents – or one per school – even before the Toronto Sun discovered, through a Freedom of Information request, that only 1,638 parents responded to the survey, and that the survey itself consisted of vague, general questions.

Ottawa parent Jeff Thompson agreed, noting in an email to LifeSiteNews that, “It’s clear that the government did not adequately consult parents. How can they continue to ignore us?”

Thompson, who pulled his one child from Grade 6 at St. John the Apostle Catholic School, and two others from Grades 5 and 1 at Our Lady of Victory Catholic School, pointed out that “each of our children is unique, and ready for different information at different times. As parents, we know best when those right times are.”

Indeed, his greatest objection to the Liberal sex-ed curriculum is that “it strips me of the right to have private conversations with my children about such personal matters.”

That’s a scenario with which Georgetown Catholic mother of five Ankica Pejic can identify.

“My son shocked me last year when he came home, after their education program regarding child birth and that, and asked me if my vagina hurt when I gave birth to him,” she told LifeSiteNews.

Pejic said she told her youngest child – then enrolled in Grade 1 in a Halton Catholic district school – that “it was the same amount of pain for all five kids that I had. I didn’t want to get explicit.”

“He was happy with that answer,” she said, adding, “I’m just worried about the next questions he’s going to start asking me about.”

Pejic, who pulled three of her children, in Grades 2, 6 and 8, out of school October 1, said she’s also concerned with the curriculum’s dealing with homosexuality, or as she put it, “the man-woman thing.”

“I have nothing against other people’s sexual preferences, but I don’t think it needs to be thrown in my face, or in my children’s face,” she said.

He counters that the word “homophobic” is meaningless, and the accusation unjust, because he harbors no ill will towards anyone with a same-sex orientation.

“But I don’t want my kids to be taught that there’s no consequence to homosexuality,” he told LifeSiteNews. “By not telling them about the consequences of choosing this sexuality,” the Liberal government’s sex-ed curriculum “is lying to them and it’s setting them up.”

That’s a concern echoed by Jason Cartier, a father of two boys aged 13 and 16, and pastor of the Wallaceburg-based U-Turn Ministries, a non-denominational outreach that helps troubled teens.

Cartier, who kept his sons home from school October 1, is also a member of Chatham-Kent municipality-based parents’ group that has about 350 members, provides information about the sex-ed curriculum and has to date sent out about 600 lawn signs, some as far as Ottawa, bearing the succinct slogan that is also its name – Let Kids Be Kids.

In his 12 years running U-Turn Ministries, Cartier – who emphasized that he wasn’t speaking for Let Kids Be Kids, but expressing his personal views – encounters “about 500 kids a year,” and his opposition to the curriculum is rooted “in the knowledge of how kids respond, and my extensive experience working with them.”

His biggest fear is that the sex-ed curriculum introduces young people to concepts they simply can’t handle, he told LifeSiteNews, and that this will “essentially backfire” and “just be another roadblock” for kids “in terms of them their development.”

“The difficulty that I have with teaching these kids so much, so fast, is that I don’t believe that they have the capacity – especially the disenfranchised kids – to apply this information in a way that is not going to be detrimental to them.”

But, in fact, neuroscience backs up the very insights Cartier gained through experience.

According to Dr. Miriam Grossman, an American psychiatrist and sex-ed critic, the part of the brain used for decision making, problem solving and understanding future consequences – the dorsal lateral pre-frontal cortex – is not fully developed in teenagers.

And it doesn’t fully develop until the twenties, she said, which means that teens are, as one advertising company put it, “missing a part of their brain.”

Grossman, who analyzed the Ontario Liberal’s sex-ed curriculum at Mississauga seminar this August, faulted the sex-ed curriculum for being short on facts and long on ideology and indoctrination, a conclusion parent Achkar also came to after his research.

There is “nothing scientific” about the curriculum, he told LifeSiteNews, and it pushes its agenda “under tolerance to everybody, as if not teaching it would be biased or racist against certain groups.”

But in Achkar’s view the “most shocking thing” about the curriculum was reading on the CLC website that Ben Levin, “the person who spearheaded this curriculum” had been convicted in April 2015 of three child pornography related charges.

Levin, is now serving a three-year prison sentence, was deputy minister of education in 2009, and as such, is regarded by sex-ed critics as the architect of the short-lived 2010 sex-ed curriculum, shelved by the Dalton McGuinty Liberals after huge parental outcry.

That version is virtually identical to the current sex-ed curriculum Premier Kathleen Wynne and her Liberals rolled out in all publicly funded schools this September, despite the widespread protests.

“I’m sure so many parents haven’t heard about something like that,” Achkar said, adding they would likely be opposed to the curriculum “if they knew, you know, where is the motivation.”

Thompson wrote that he had “spoken to many parents who had no idea about the new curriculum,” and also talked to many who “agree with us but couldn’t participate” in the one-day student strike.

If Ontario’s French schools can delay Wynne’s sex-ed, so can the English schools