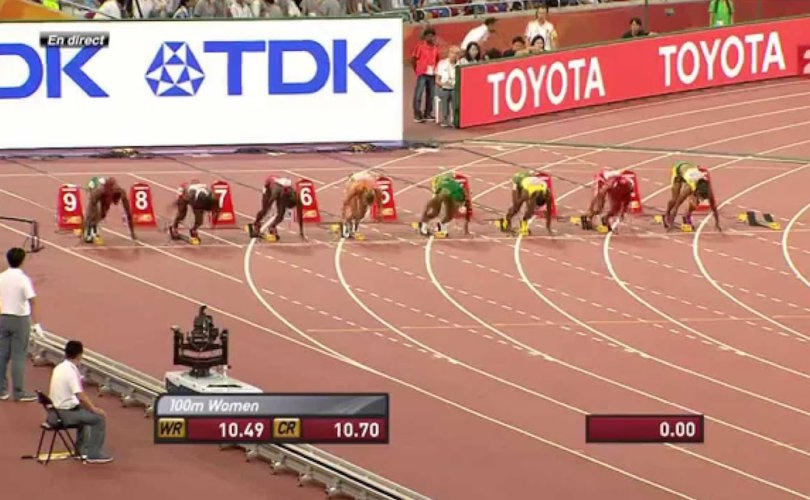 ENGLAND, July 6, 2016 (LifeSiteNews) — Two British men could become the first “transgender” athletes to compete in the Olympics as women next month in Rio de Janeiro.

The Daily Mail reported Saturday that two biologically male athletes who have transitioned to look like women are in the running to be selected to compete for Great Britain at the Games in August.

Transgender issues adviser Delia Johnston said that based on recent performances, the unnamed duo are expected to qualify for the Olympics. She also said they have already represented Great Britain at “a European championship” and have “competed in their assigned gender,” by which he presumably means male. Their sports were not identified.

The Olympics’ new guidelines allow men who say they are women to compete in the Olympics even if they have not undergone castration provided testosterone levels have been below male levels for a year.

“To require surgical anatomical changes as a pre-condition to participation is not necessary to preserve fair competition and may be inconsistent with developing legislation and notions of human rights,” the International Olympic Committee said in its decision.

Katy Faust, a pro-family advocate who was raised by lesbians and speaks out about same-sex parenting, took to Facebook to blast the news that the two British males might compete against women.

“Friends, I ask you honestly: How can this be a ‘remarkable human rights victory’ for the women who will be competing against these male-born athletes?” she asked. Even if the male athletes have undergone genital surgery, such surgery cannot “change the fact that men are in general 30 percent stronger that women, have greater bone density, have a higher center of gravity, muscle mass that gives them increased speed and strength in sports … and don't have to worry about whether or not the Games will coincide with their ‘time of the month,’” Faust wrote.

“If the male athlete [comes] in a full second under the women's world record for the 100 meter dash (typical difference between men's and women's times) wiping out the astounding time of Florence ‘Flo-Jo’ Griffith-Joyner, will you cheer?” she continued. “What if the guy clears the unthinkable height of 6m in pole vault for women, when previous women without the upper-body strength gifted to men have reached little more than 4m? Will you tell his female competitors that they simply didn't train hard enough? What if this guy comes in under 23 seconds in the 50 meter freestyle swim, which would be a world record for a woman but merely average for a male Olympian. Will you say, ‘Yay, equal rights!’ If so, then you may as well abolish all categories of men and women in sports, and thereby destroy every world record set by a woman in nearly every event.”

Former Olympian Katie Uhlaender tweeted that she supports people identifying as they wish, but “this is ridiculous … biology is biology.”

This is ridiculous. I'm all for identifying how you want to, but biology is biology. This is wrong. https://t.co/Xo367Gzstw

Commentator Claire Lehmann noted the irony in males being allowed to compete as women but that if female athletes take steroids, they are disqualified from the Games:

Two British athletes born as men set to compete as women in Rio Olympicshttps://t.co/HP52U06HVv Yet if women take steroids – disqualified

Obianuju Ekeocha, the Founder of Culture of Life Africa, tweeted that African and Caribbean women may not take home any medals in this Olympics as a result of the inclusion of men in female sports.

African and Caribbean female athletes may not pick a single medal��this olympics @Rio2016 and here is why����https://t.co/Q0uhBaX2f0

Andrea Williams, the chief executive of the UK group Christian Concern, said allowing men to compete as women is unfair.

“Athletes are routinely tested for performance-enhancing drugs in an effort to prevent cheating,” Williams said. “Yet the biological advantage of being born male is ignored as sporting committees aim to adapt to today’s societal norms.”

“Those propagating these ideas argue that it is a human rights issue, yet there are many professions that require certain physical characteristics – optimal eyesight, or a certain build for jockeys or bodyguards, for example,” she continued. “The same concept should be applied here, as measuring testosterone levels will not guarantee fairness.”