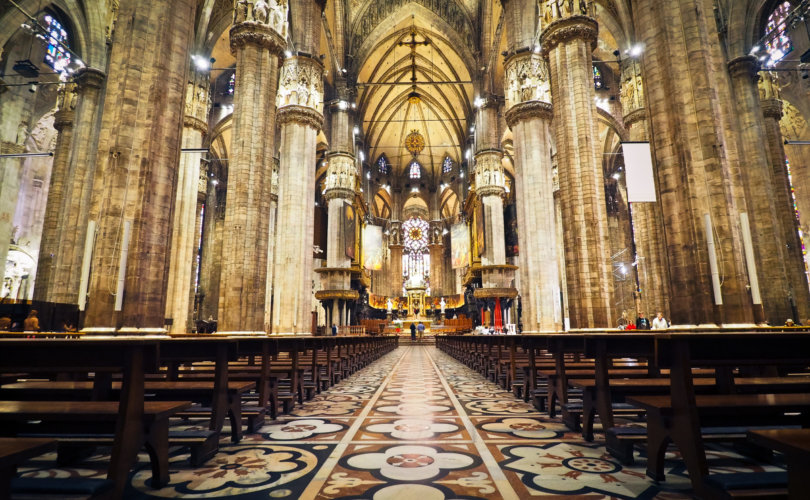 LAS CRUCES, New Mexico, April 15, 2020 (LifeSiteNews) — The bishop of Las Cruces, New Mexico has lifted a diocesan ban on public Masses, stating in a letter to his priests that “depriving the faithful of the nourishment offered through the Eucharist” cannot “become the ‘status quo’ for the foreseeable future.”

Bishop Peter Baldacchino advised his priests in the April 15 letter obtained by the Catholic News Agency that they can resume offering the sacraments as long as they abide by state-order health directives, which mandate that Masses in churches have no more than five attendees including the priest.

Baldacchino is the first American bishop known to lift a diocesan ban on public celebration of the Mass since coronavirus pandemic emergency shutdowns began in mid-March, according to CNA.

All American dioceses have cancelled public Masses, and a number of bishops have suspended Confession and restricted anointing of the sick – and even the Last Rites – as well as locking churches and chapels. Some bishops have also banned drive-in Masses and Eucharistic adoration.

But Baldacchino stated in his letter that “We [as priests] have been called by Christ and ordained to serve the people of the Diocese of Las Cruces, to bring them hope and consolation during this difficult time.”

The bishop ordered the suspension of public Masses March 16, “at the outset” of the pandemic, “as we assessed the situation and established a safe way to continue to bring Christ to the people, both through the Word of God and the Sacraments,” his letter stated.

“These past few weeks have allowed me to further analyze the situation and discern a safe way to proceed,” Baldacchino wrote.

“It has become increasingly clear that the state shutdown will last for some time. Depriving the faithful of the nourishment offered through the Eucharist was indeed a difficult decision, one that I deemed necessary until I had further clarity regarding our current state of affairs, but it cannot become the ‘status quo’ for the foreseeable future.”

CNA reported that diocesan communications director Christopher Velasquez confirmed the letter, and said the diocese is urging Catholics in at-risk categories to stay home and watch Mass on live-stream when possible.

Baldacchino said in the letter that his action was in part a response to two priests he knew dying from the virus.

“We are all aware of the tragedy caused by the Coronavirus, I myself have lost two close friends of mine, priests I studied and served with. I am fully conscious of the death and sadness these days seem to bring. And yet there is more,” he wrote.

Baldacchino noted that the state of New Mexico had recently updated its Public Health Order, to no longer include churches as “essential services,” CNA reported.

“I strongly disagree,” he said. “Sadly, the Governor is no longer exempting places of worship from the restrictions on ‘mass gatherings.’ It seems to me that while we run a daily count of the physical deaths we are overlooking those who are dead interiorly.”

The bishop issued guidelines to his priests to ensure compliance with the governor’s health directives. These limit attendance at Mass in church buildings to five people, including the priest, that people stay a minimum of six feet apart, and that all seating be sanitized after Mass ends.

Baldacchino also authorized priests to say Mass outdoors, in keeping with state orders on social distancing, and he “specifically recommended setting up an altar in the parish parking lot with parishioners remaining in their cars with an empty space between each vehicle,” CNA reported.

“Parishes that lack sufficient parking spaces may celebrate the liturgies in open cemeteries or other available open spaces. Parishioners should maintain at least a six feet separation at all times,” the guidance states.

The crisis created by the pandemic had brought about “a time for renewal,” Baldacchino said in his letter.

“In the events of these days and weeks the Lord is calling us out of our comfort zone, he is calling us to seek new ways to reach the people. In addition to this mission with which we are entrusted, we also have the mission to keep people safe. The two must be equally pursued,” he said.

Moreover, the “past few weeks have brought to light many unintended consequences of the ‘stay-at-home’ order” the bishop wrote, pointing out that the federal Disaster Distress Helpline has reported a 891% increase in calls. Suicide prevention hotlines also seeing a spike in calls, and incidents of domestic violence have increased during the lockdowns.

“While it is true that we need to take every reasonable precaution to reduce the spread of Coronavirus, it is equally true that we offer the greatest ‘essential service’ to our people.”

“Simply put, in the midst of financial uncertainty, fear for one’s health, pandemic induced anxiety and confinement to their homes, people definitely need a word of hope,” Baldacchino wrote.

“We, as priests, are called to bring the Word of Life to people, we are called to minister the life-giving sacraments. Televised Masses have been an attempt to bridge the gap during this time, but I am increasingly convinced that this is not enough,” he added.

“The eternal life offered in Christ Jesus needs to be announced. It was precisely the urgency of this announcement that drove the first apostles and the need is no less today. Christ is alive and we are his ambassadors.”