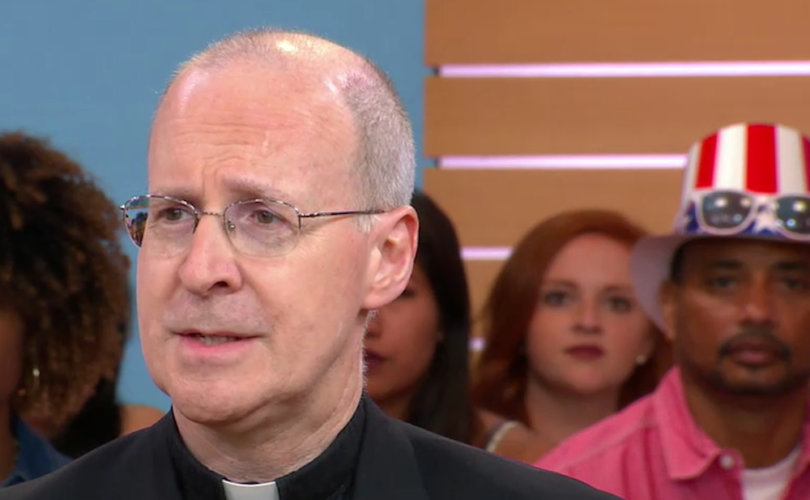 According to Father Martin’s book publisher, Church hierarchy is continuing to endorse his message in light of  “backlash from some unofficial far-right Catholic groups leading to the cancellation of three scheduled lectures.”

“Many Catholic leaders have stepped forward to offer forceful new support for Father Martin and his message of ‘respect, compassion, and sensitivity,’” a HarperOne news release said.

Father Martin posted about the development on Twitter, saying the endorsements from Wester, Fiorenza and Stowe will be included in a forthcoming revised and expanded edition of his book “Building a Bridge”.

Father Martin is the editor-at-large for Jesuit-run America Magazine. Pope Francis appointed him earlier this year as a consultant for the Vatican’s communications operations.

In his book “Building a Bridge“, he contends the Catholic Church should be more welcoming to LGBT-identifying Catholics.

Father Martin regularly affirms homosexual activity to same-sex-attracted individuals, despite the Catholic Church teaching that homosexual actions are sinful and all people are called to be chaste, that sexual intercourse is reserved for marriage, and that marriage can only be between a man and a woman.

He says the language on homosexuality in the Church’s catechism should be changed because it’s too harsh. And he insists he is attacked for simply saying the Church should be more welcoming.

He will regularly charge critics of his message with hate and homophobia, or even latent homosexual tendencies, and remains silent when some among his large social media following vehemently attack those who object to his message.

Father Martin has support for his LGBT stance from the secular media and liberal Catholic media outlets, as well as a number of liberal prelates and others on the left, some of whom consider opposition to his controversial message a cancer in the Church or would-be censorship by so-called Catholic cyber militias.

In mid-September, the Theological College in Washington, D.C., cancelled a Father Martin appearance scheduled for its alumni days this month. In August, the Equestrian Order of the Holy Sepulchre had rescinded its invitation for him to speak for the ancient Catholic order, also set for this month.

The Theological College cancellation followed an earlier cancellation of a lecture in London for Cafod (Catholic International Development Charity in England), which was also scheduled for October.

In the case of the Equestrian Order, Church Militant reported “the rescinding of the invitation came after intense backlash from knights, outraged that the order would welcome the unabashed LGBT advocate to its gala.”

Church Militant also reported that the Baltimore Diocesan Fiscal Management Conference had cancelled Father Martin's speaking invitation for late last month, saying it was due to reasons of health.

Cardinal Cupich, known as one of the more “progressive” U.S. prelates, invited Martin late last month to speak at his cathedral next Lent after the recent cancellations of the Jesuit priest’s speaking engagements by Catholic institutions.

Cardinal Cupich told the Chicago Sun-Times he’d been talking to Martin about speaking in his archdiocese for some time, but also called the dis-invitations of him “very unfortunate.”

“I wanted to make sure that I affirmed what he was doing,” Cupich stated. “And I wanted to let him know that I support him.”

Cardinal Cupich had expressed support during the 2015 Extraordinary Synod for those in same-sex relationships to be permitted to receive the sacraments if they have come to a decision to do so in good conscience. He has said as much on other occasions as well.

While the Church teaches that a person is not defined by their sexual inclinations, the bishop also concurred with Martin in the contention that “saying that one of the deepest parts of a person is ‘disordered’ seems needlessly cruel.”

Archbishop Fiorenza was one of 10 Catholic bishops who teamed up in 2013 with Faith in Public Life, a left-leaning group supportive of Planned Parenthood, to release a report urging Catholic organizations to fund groups connected to the promotion of abortion and other acts opposed by the Church. The Archbishop had expressed approval for Church collaboration with organizations that support things in conflict with its teaching and said Catholic identity is far broader than opposition to abortion and same-sex marriage.

Bishop Stowe spoke this past spring at a conference for the dissident pro-homosexual New Ways Ministry. The gathering was titled “Justice and Mercy Shall Kiss: LGBT Catholics in the Age of Pope Francis.”

Nugent, who died in 2014, largely followed the CDF order, but Gramick did not, and left the School Sisters of Notre Dame for the Sisters of Loretto over the issue.

Sister Gramick is listed in the HarperOne release as among the “many other church leaders” who have endorsed Father Martin’s book. On the list with her are Cardinal Kevin Farrell, the former Dallas bishop who is now the Prefect of the Dicastery for Laity, Family and Life; Cardinal Joseph Tobin, archbishop of Newark; and San Diego Bishop Robert McElroy.