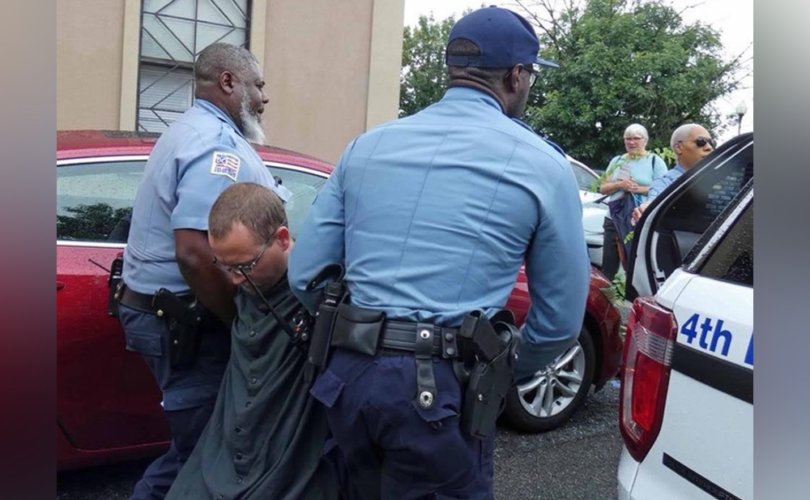 Father Fidelis Moscinski was arrested by police again on Saturday for standing up for the rights of the unborn during a Red Rose Rescue in New Jersey.

MONTCLAIR, New Jersey, October 1, 2018 (LifeSiteNews) — Police arrested five pro-lifers early Saturday morning and charged them with defiant trespassing for walking into New Jersey's Pilgrim Medical Center abortion mill with roses and standing up for the rights of the unborn.

“They talked to the moms for as long as they could until the police arrived,” said Red Rose Rescue organizer Monica Migliorino Miller. “The first squad car showed up within about 10 minutes after the rescuers went in.”

The Montclair Police Department officers escorted out Adele Gilhooly, an elderly woman taking part in this Red Rose Rescue, but did not charge her. The five others, though, were removed by police, at least some of them in handcuffs, and charged.

Among them was Father Fidelis Moscinski of the Community of the Franciscan Friars.

As he was being carried away, his arms handcuffed behind his back, a bystander offered words of support: “Thank you, Father! Thank you for being a priest to God.”

The other pro-lifers charged during this Red Rose Rescue include Patrice Woodworth, Matthew Connolly, William Goodman, and woman who chose to identify herself only as “Baby Jane Doe”.

“We were all astonished at just how quickly the police arrived on the scene,” wrote Migliorino Miller. “Within another 10 minutes, the first rescuer, I think it was Will Goodman, was being carried out of the death center, followed one-by-one by the four others.

“No one expected that the police would be there that fast or place the rescuers under arrest so quickly,” wrote the pro-lifer.

In New Jersey, a person is charged with defiant trespass when he or she is accused of having entered a place despite having been given notice to stay off the premises, according to the Tormey law firm's website.

Within 3 1/2 hours, all of the pro-lifers arrested Saturday except “Baby Jane Doe” were released on their own recognizance without bail. Their next court appearance is slated for Wednesday.

This is not the first time Father Moscinski and “Baby Jane Doe” have been arrested for Red Rose Rescues. Both of them took part in another Red Rose Rescue in late July at an abortion clinic in Washington, D.C.

Red Rose Rescues are modeled after the pro-life activism of Canadian Mary Wagner, who has repeatedly entered Toronto abortion centers and offered red roses to mothers waiting to have their unborn babies aborted.

According to Migliorino Miller, this Red Rose Rescue operation was peaceful and did not involve the blocking of the abortion center's main entrance or any of the doors to the rooms where the abortions are performed.

Neither the Montclair Police Department nor the Pilgrim Medical Center responded to media requests for interviews or comment by deadline.

Inside the abortion clinic, Red Rose Rescuers quietly approached mothers seated in the waiting room at about 8:30 a.m. and offered them red roses as a symbol of life. Attached to each rose was a card with a note: “You were made to love and to be loved. Your goodness is greater than the difficulties of your situation. Circumstances in life change. A new life, however tiny, brings the promise of unrepeatable joy.”

On the other side of each card were the phone numbers of local pregnancy help centers.

Abortion clinic workers responded to the pro-life witness by escorting the mothers to rooms away from the waiting area.

“The longer we're there, the greater the opportunity that a woman will turn away (from abortion),” said Migliorino Miller, a director of Citizens for a Pro-life Society, which organizes the Red Rose Rescues. “(The abortion clinic workers) want to remove the pro-life presence.”

Even with the pregnant women out of reach, the pro-lifers stayed in the abortion clinic for as long as possible in defence of the unborn babies' right to life, said Migliorino Miller.

Police officers arrived on the scene to find the pro-lifers on the floor, some praying quietly, others singing hymns, the Red Rose Rescue organizer wrote in a statement.

“The Red Rose Rescue is an act of charity for women who feel for whatever reason they must have their innocent unborn children killed,” said Migliorino Miller. “Those who took part were willing to embrace risks for these women and their babies.

“We will go into the very places where the unborn are put to death and extend help to the moms,” she said. “Should this help be refused, we will not leave the abortion centers but remain in solidarity with the helpless victims oppressed by the injustice of abortion.”

On Saturday, a video taken outside the Pilgrim Medical Center during the Red Rose Rescue showed a Latino couple and two black women going into the building. According to Migliorino Miller, there was also a Caucasian woman among those waiting for an abortion.

“This was a full-court press to save babies from abortion,” wrote Migliorino Miller. “No less than six priests were there: one, a Father Hector, from a local parish; Father Bill Kuchinsky, priests from the Franciscan Friars of the Renewal; six brothers from that order and many lay people.”

Red Rose Rescue organizers are asking pro-lifers to pray for those who still have to go back to court Wednesday and face charges for Saturday's witness to life.