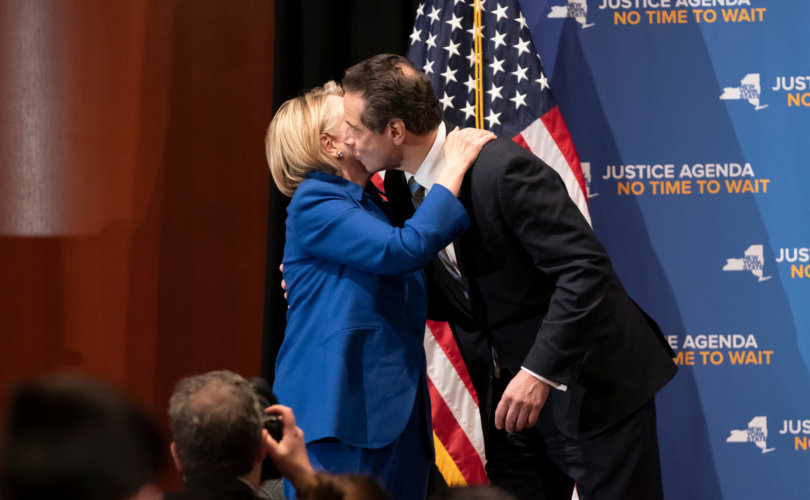 ALBANY, New York, March 8, 2021 (LifeSiteNews) — At least five women have now come forward to accuse the governor of New York of having touched them inappropriately.

In an interview with The Washington Post published Saturday, former press aide Karen Hinton, 62, said that Andrew Cuomo, now 63, once called her to his “dimly lit” hotel room and hugged her in an overly intimate fashion. The married woman pulled away, but Cuomo pulled her back into another embrace. Afraid her boss would kiss her, Hinton pulled herself away a second time and left the room. At the time, Cuomo was in charge of the U.S. Department of Housing and Urban Development.

Cuomo stated that Hinton’s story is “not true” and that Hinton, more recently an employee of New York City Mayor Bill De Blasio — whom she also accused of creating a toxic work environment — is  Cuomo’s “longtime political adversary.” In response, Hinton said that “(t)ruth is, the ‘longtime adversary’ that Cuomo fears that most.”

Hinton even suggested that Cuomo is the new Donald Trump, surely fighting words in a dispute among Democrats.

“Trump may be gone, but Cuomo has stepped right into his shoes by blaming the abused for his own abusive behavior,” she said.

Hinton was the fifth female Democrat to accuse Cuomo of misconduct. Also on Saturday, a fourth woman made her own complaint about the governor: that he had asked her if she had a boyfriend, touched her lower back, kissed her hand, and called her “sweetheart.” The complainant, Ana Liss, was a policy and operations aide for Cuomo from 2013 to 2015.

The third female Democrat to come forward was Anna Ruch, 33, a professional photographer who worked for both the Obama and the Biden presidential campaigns. Last Monday, Ruch stated that Cuomo had touched her inappropriately at a wedding reception in 2019. First, the governor put his hand on her back, and after Ruch removed it, Cuomo held her face in his hands — and was photographed doing so — and asked if he could kiss her.

“I was so confused and shocked and embarrassed, I turned my head away and didn't have words in that moment,” Ruch said.

The first two Democrat women to come forward were Lindsey Boylan, a former Cuomo adviser, and Charlotte Bennett, another former adviser and executive assistant. Boylan published an essay in the online Medium magazine on February 24 about her experiences with Cuomo, and Bennett spoke to The New York Times on February 27.

Boylan’s allegations were rather more serious than Bennett’s, as they included the claim that the governor had kissed the married woman on the lips. Bennett, in contrast, did not state that Cuomo had touched her. The now 25-year-old said that the governor had questioned her about her personal life, asked how she felt about age difference in relationships, and told her he would be open to dating a 22-year-old. He also allegedly told her he was lonely and asked her when she had last “really hugged somebody.”

Cuomo made a half-hearted apology on February 29, saying he had come to understand that his “interactions” may be been “insensitive or too personal.” He stated that some of the things he has said “have been misinterpreted as an unwanted flirtation.”
The governor was adamant that he had never molested or tried to seduce anyone.

“To be clear, I never inappropriately touched anybody and I never propositioned anybody, and I never intended to make anyone feel uncomfortable,” he stated.

Now Democrats, among them New York City comptroller Scott Stringer, are demanding that Cuomo resign as governor. This he refuses to do.

“I’m not going to resign because of allegations,” Cuomo told reporters yesterday.

“The premise of resigning because of allegations is actually anti-democratic.”

Others are questioning why the Democrats are focusing on the #MeToo allegations and not on Cuomo’s disastrous COVID-19 policy that led to the deaths of thousands of elderly people in nursing homes.

“But a new MRC study shows that networks have only given 15 minutes of coverage to Cuomo's nursing home scandal … over the course of nearly 10 months.”

The founder of MRC, who is also the publisher of NewsBusters, added that the media prefer writing about his alleged sexual harassment.

“They would rather talk accused harassment than admit they promoted a man who lied about senior covid deaths caused by his own failed policies.”

Others are asking why the Democrats are suddenly turning on Cuomo, a man they depicted before Joe Biden was in the Oval Office as an anti-Trump COVID-19 hero.

“What we need to know is, why is Cuomo all of a sudden in the liberals' crosshairs?” Regina magazine editor Beverly Stevens, a former New York state Democrat staffer, told LifeSiteNews last week.

“He is a threat to the Biden-Harris-Obama triumvirate that now rules in Washington and they are out to destroy him,” Mosher said via email.

“Cuomo is a leading candidate to run against Harris for the Democrat nomination in 2024. By then, Biden will have stepped down and Harris will be serving as the — unelected and unpopular — president in his place,” Mosher continued.

“So, in my view, the Obama-ites are eliminating a future opponent to their chosen candidate.”

Meanwhile, it would not be in the Democrats’ best interests to use the COVID-19 nursing home disaster as their lever, Mosher believes.

“They are using MeToo rather than the nursing home deaths because if they focus on the latter, a half-dozen Democrat governors are also implicated,” he said.

An alternative explanation is that the United States has reached peak “#MeToo,” but Mosher doesn’t buy it.

“ … (T)here are much more serious allegations against Biden that are currently being ignored,” he observed.