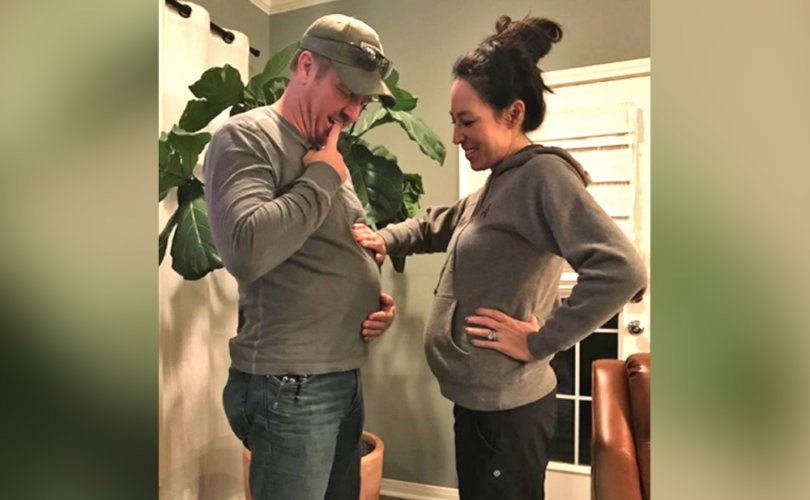 WACO, Texas, January 3, 2018 (LifeSiteNews) –  “Fixer Upper” stars Chip and Joanna Gaines made headlines this week with the news they are expecting their fifth child.

The endearing couple behind the wildly successful HGTV television program, Chip 43, and Joanna, 39, had dropped hints on social media prior to and during this week’s broadcast of their show, and have since made it official.

Everyone tune in now for tonight’s #FixerUpper! We’ve got some BIG news to share.. hint #1 pic.twitter.com/Qwl3ddbbTd

“Gaines party of 7.. (If you’re still confused.. WE ARE PREGNANT,” Chip Gaines posted on Instagram after the show aired. His post includes a photo of the couple, both examining their respective bellies.

Gaines party of 7.. (If you’re still confused.. WE ARE PREGNANT) @joannagaines

Wednesday morning, Joanna shared a short video clip of an ultrasound of their baby, with heart and celebrating-hands emojis, stating, “Chip swears he can already tell it’s a boy. Look at the little heartbeat!! #5.”

Chip Gaines can be heard in the video exclaiming over their child’s beating heart shown clearly in the ultrasound.

The Gaines’ announcement of their fifth child was timed to coincide with Tuesday night's episode of their program.

“Fixer Upper” is popular in part for its engaging hosts who share their talents and their family with viewers.

The baby announcement broadcast continued in this vein, featuring Joanna Gaines' younger sister — who also learned mid-renovation that she was expecting her sixth child.

“So excited about tomorrow night’s #fixerupper episode,” Joanna Gaines said on Instagram. “It’s my all time favorite reveal because we FINALLY get to do a house for my little sister! They (5 Kids + one on the way) are moving back to Waco after nine years away.”

Chip Gaines had hinted about some “big news” on Twitter prior to the episode airing, joking in a video clip about his wife asking for pickles and ice cream, which also had the couple chanting, “#5!”

Another hint came from Joanna Gaines on Instagram as well on Tuesday, with a photo displaying a calming and beautiful waterfront scene accompanying her message, stating, “New year, new hope… Be expectant. There is just something about fresh faith and unwavering trust that brings life to our souls. May this be your best year yet. #2018.”

The news was celebrated on the network’s Fixer Upper program blog.

“Chip and Joanna Gaines are Pregnant!” the post said. “Who's ready for Hashtag Baby Gaines in 2018?”

Fixer Upper is HGTV’s highest-rated show, averaging some 3-4 million viewers at a time when cable ratings have been on the decline. Industry outlets have termed it “ratings gold.”

The show is part of a small business empire built by the Gaines’ since their marriage in 2003.

Their brand includes Magnolia Homes, a real estate, renovation, and design company, restoring older properties into charming homes for Waco-area families – the premise for their program.

Along with Magnolia Homes they have several small businesses also under the Magnolia brand, which include a furniture line and paint collection, a home décor line for Target, a bed and breakfast, retail shop and a bakery.

The Gaines' book, “The Magnolia Story,” recounts the story of their life together and building their business. It was published October 18, debuting a #1 bestseller.

The couple was intensely scrutinized and pressured to divulge their views on homosexuality late last year after a BuzzFeed article broached the subject with the fact the Gaines’ attend an evangelical church that espouses Biblical marriage.

The story and the internet outlet’s attempt to generate response from the Gaines’ Magnolia company and HGTV were criticized as a witch-hunt targeting the Christian couple.

Chip Gaines later addressed the controversy implicitly in a blog post lamenting division, saying he and his wife care about all people and calling for engaging “people who are different from us with dignity and with love.”

The Gaines’ announced in late September that the fifth and current season of their show would be the last, citing the need to take time for their family and the businesses.

They said that “Fixer Upper” has been an amazing adventure, that they’d poured their blood, sweat and tears into the show, and that they needed to catch their breath.

“Our plan is to take this time to shore up and strengthen the spots that are weak, rest the places that are tired and give lots of love and attention to both our family and our businesses,” they said.

One of Chip Gaines’ pre-announcement social media posts alluded to their new baby’s conception occurring in the month of October, indicating Joanna Gaines would be a few months along.

“We are officially pregnant,” he said. “And I could not be more EXCITED! #5 #7ThePerfectNumber.”