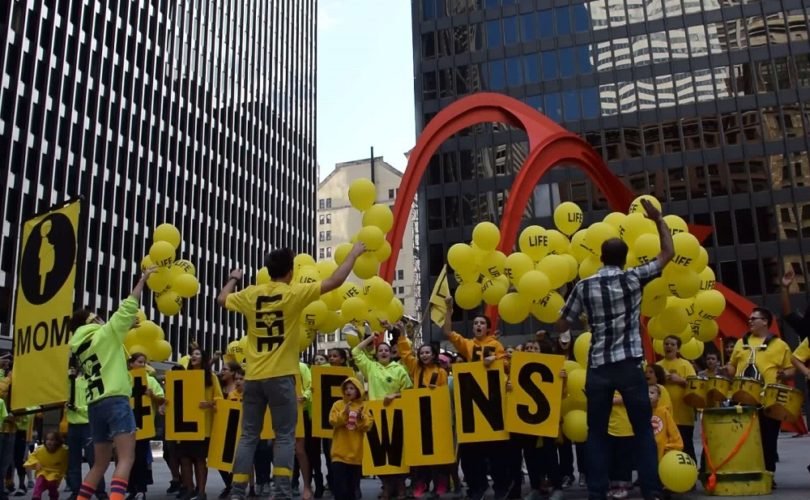 Note: Video of the flash mob is included below.

CHICAGO, September 29, 2015 (LifeSiteNews) – When Chicago's Feminist Uprising to Resist Inequality and Exploitation called for a rally on September 19 to defend beleaguered abortion-profiteer Planned Parenthood, they got more than they tweeted for: a surging, rollicking, chanting band of teenage Crusaders for Life equal in numbers but, according to participant Alex Beke, 17, “way more joyful.”

And far better chanting, too, because of the Crusaders' connection with Gregorian Chant and traditional Christian liturgy.

FURIE wanted a rally to express the support of Chicago's Planned Parenthood, which has been under sustained political and media assault because of the revelations of an undercover team earlier this year that exposed the efforts of the nation's leading abortion provider to market unborn baby parts.

“Join us for a rally and speakout [sic] against the continuing attacks on abortion rights and funding for reproductive healthcare, childcare, and education in IL,” went the Facebook call. “The most recent attacks on Planned Parenthood including heavily edited undercover 'sting' footage from anti-choice groups is just the latest strike in the decades long war on women's rights.”

But then Crusaders for Life decided to respond. The young organization has spread nationwide from its base in two Chicago parishes served by the Canons Regular of St. John Cantius. This is a new, still small, order of priests and brothers devoted to helping “Catholics to rediscover a profound sense of the Sacred through solemn liturgies, devotions, sacred art and music, as well as instruction in the heritage of the Church, catechetics and Catholic culture, ” according to Father Joshua Caswell, assistant at the order’s birthplace at St. John Cantius.

When the Crusaders spread the word to their membership to join FURIE at Chicago's Federal Plaza through various social media, the feminists were tuned in enough to learn about the threat. “ALERT,” they countered. “We've just gotten word that there will be anti-choicers counter protesting our event tomorrow. That means more than usual, we need everyone to show up ready to chant down these scum bags.”

What was the Crusaders' goal? Fr. Joshua's brother Nathan, a priest at Chicago's St. Peter's Church, told LifeSiteNews, “We wanted to go out there and engage them. We wanted to bring light and even fun into the situation and to understand their point of view, see their signs, and so on.”

Not for the first time, the Crusaders did this with a “flash mob.” After about a hundred pro-PP people assembled in an inward-facing hollow square at one end of the federal plaza, 20 yellow-clad Crusaders who had marched through the streets from St. John Cantius took up position in the middle, drumming and chanting.

“They laughed and mocked us because there were so few of us,” recalls Alex Beke. “But our drumming was a call to 80 more hiding behind a building.” These came running across the square to join the first group and together they drummed and chanted. “Their faces fell when the rest showed up,” said Alex.

A video posted by the Crusaders attests to their relative youth and evident exuberance, and the gloom of their opposite numbers over in the death camp. Indeed, “all Crusader events are characterized by their energy and joy,” said Father Joshua Caswell, whose family hails from Saskatoon, Saskatchewan.

Accompanied by drummers, the 100 Crusaders and a dozen parents sang ditties such as “We love babies, yes we do. We love babies, how 'bout you?” and “I used to sit at home all day/ letting my life waste away. Then one day I sprang awake/ to put abortion on the brakes.”

In the playful atmosphere, the chanters achieved remarkable unison and small wonder. Almost all are drawn from the order's choirs. St. John Cantius alone has two children's choirs and several more adult choirs, each devoted to a different style of chanting.

Among the shorter, newer ditties, two traditional chants graced the Federal Square on September 19: Magnificat and Salvator Nobis. Both of the Caswells believe that there is a reason why choristers become Crusaders for Life. “It's about the joy,” said Father Joshua. “Our T-shirts and balloons are yellow, like the halos of saints and the gold in the Vatican flag: the color of joy. Joy is deep in the heart of the traditional liturgy. And in both our choirs and our pro-life actions we are expressing the joy and hope in doing what is good and true.”

The pro-PP rally soon departed for another park. The Crusaders followed, chanting, till both groups dispersed. FURIE videos of the event do not acknowledge the Crusaders.