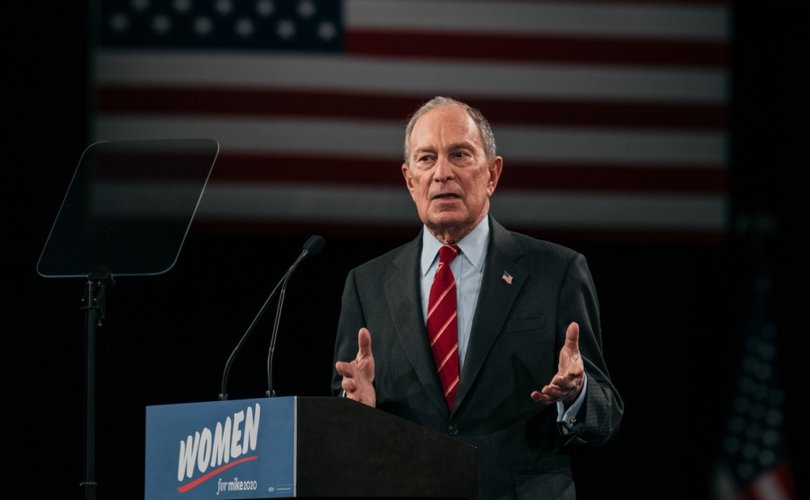 February 10, 2020 (LifeSiteNews) – Today, former New York Mayor Michael Bloomberg is a standard-issue progressive, but he’s currently under fire from LGBT activists for past comments in which he bluntly acknowledged why the transgender cause was counterintuitive to most Americans.

The 2016 video shows Bloomberg speaking to a crowd at England’s Oxford University, during which he addressed the “disconnect” between “intelligentsia” such as himself and the attendees, versus the “vast bulk of people” of the American Midwest.

Here's @MikeBloomberg in December 2016 at Oxford explaining how trans rights simply won't fly in the midwest because only the “intelligentsia” can understand why “some man wearing a dress should be in a locker room with their daughter.” pic.twitter.com/g6aa8aB1jq

“If you think about it, we, the intelligentsia, people who could make it into this room, we believe a lot of things in terms of equality and protecting individual rights that make no sense to the vast bulk of people,” Bloomberg said. “They’re not opposed to you having some rights, but there’s a fundamental disconnect between us believing the rights of the individual come first and the general belief around the world, I think it’s fair to say, that the rights of society comes first.”

“If you want to know, is somebody a good salesman, give him the job of going to the Midwest and picking a town and selling to that town the concept that some man wearing a dress should be in a locker room with their daughter,” he continued. “If you can sell that, you can sell anything. I mean, they just look at you and they say ‘what on Earth are you talking about?’ And you say, well, this person identifies as, her gender as different than what’s on their birth certificate. And they say, ‘What do you mean? You’re either born this or you’re born that!’”

LGBT activists, including the Human Rights Campaign’s Charlotte Clymer, and openly transgender and pro-LGBT Vox journalist “Katelyn” Burns, responded that the remarks should disqualify Bloomberg from the Democrat nomination:

This is deeply disgusting and disqualifying, and @MikeBloomberg needs to apologize for it. Trans people were living openly in the Midwest long before Bloomberg woke up one morning and decided to start buying elections. https://t.co/zHIbyjkqg2

There is an elitist tendency among some to suggest they are fully in support of trans rights–but those yokels in flyover country will never be. This is not only demeaning to trans people; it's an entitled dismissal of the intelligence of anyone outside the Acela corridor. https://t.co/pfpc4wu2Kj

Business Insider reported that the Bloomberg campaign responded with a statement that did not acknowledge the uproar over those specific remarks, but stressed the mayor’s past support for transgender employee healthcare, and that he was “running to defeat Donald Trump and reverse the many policies he has implemented that attack the rights of the transgender community.”

The pro-abortion Bloomberg, who donates heavily to left-wing causes such as gun control and climate change, touts a pro-LGBT record ranging from helping enact same-sex “marriage” to having “presided over New York City’s first official same-sex marriage (sic) the day it became legal.”

Feb. 11, 2020 update: This report now refers to “Katelyn” Burns as an openly transgender and pro-LGBT journalist who writes for Vox.