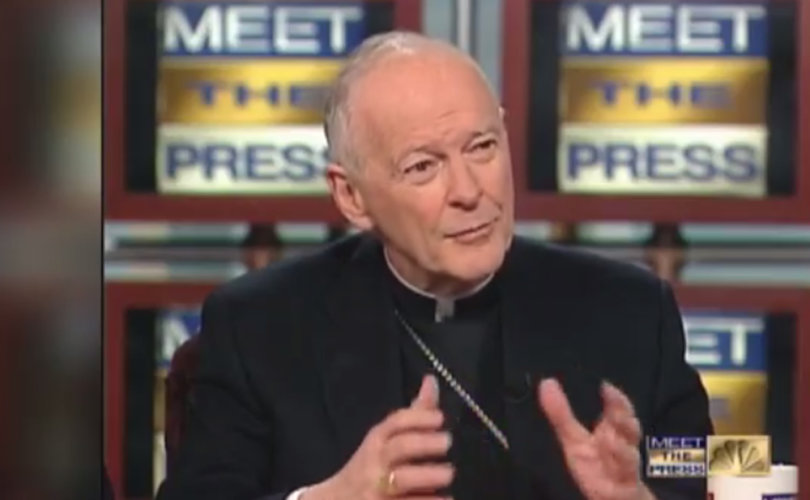 Theodore McCarrick is interviewed by Meet the Press host Tim Russert in 2004 about clergy sexual abuse.YouTube

WASHINGTON, D.C., February 26, 2019 (LifeSiteNews) – Asked in 2004 whether there is a “special place in hell” for clerical sex abusers, the now disgraced ex-Cardinal Theodore McCarrick said: “There is certainly a special, terrible judgment on someone who would abuse the trust that a priest must have.”

McCarrick told Meet the Press host Tim Russert, “It’s part of our religion that a priest is supposed to be father, brother, friend and guide. And if it’s destroyed, if it is destroyed with young people, with children, it becomes all the more horrible.”

At Presser for Vatican Sexual Abuse Summit #PBC2019, @deliacnn says in 2002 US Cardinals were here in Rome, with McCarrick the figurehead speaking about zero-tolerance, and asks how are you Cardinals holding yourself responsible, and how can the American people trust you? pic.twitter.com/fqmShjVU7A

McCarrick resigned from the cardinalate last year and was laicized last week for sex crimes committed against minors and adults. He has claimed to have no recollection of the sexual abuse of an 11-year-old boy decades ago and has not publicly repented of the crimes imputed against him.

FLASHBACK: Theodore McCarrick was defrocked by the Vatican. In 2004, Tim Russert asked him if there was “a special place in hell” for abusive priests. #MTP

McCarrick: “There is certainly a special, terrible judgment on someone who would abuse the trust that a priest must have.” pic.twitter.com/mkk7TRm0NH

In 2002, McCarrick had presented himself as a voice of reform in the wake of revulsion over cases of sexual abuse of minors by clerics dating back decades. He took the lead in drafting the U.S. bishops’ Charter for the Protection of Children and Young People that was the result of a meeting in Dallas of the U.S. Conference of Catholic Bishops.

“This crisis is more important than any crisis we've had in my time,” he told The New York Times. “Our people are waiting for the bishops to say, OK, we've got it under control, we're on the same page, we hear you and we've listened to you and now you can be sure that this will never happen again.''

Since the release of the Dallas charter, weaknesses were found in it. In what has been described as a prescient moment during the bishops’ meeting in Dallas, Archbishop Elden Curtiss of Omaha, Nebraska noted that a revised text of the charter replaced the term “clerics” with the phrase “priests and deacons.”

Bishop William Lori of Bridgeport, Connecticut, at the time replied that the drafting committee “decided we would limit it to priests and deacons, as the disciplining of bishops is beyond the purview of this document. ‘Cleric’ would cover all three, so we decided not to use the word ‘cleric.’” Bishops, including McCarrick, were therefore exempted.

Another flaw in the Dallas Charter is that it offers no protection from sexual predators to persons older than age 18, and no rules shielding seminarians, priests and others.

It was in 2002 — the same year as the McCarrick interview on “Meet the Press” — that erstwhile Bishop Donald Wuerl of Pittsburgh reported allegations against McCarrick to Papal Nuncio Gabriel Montalvo. During a 2004 hearing by the diocesan review board, former priest Robert Ciolek alleged that he had been abused by McCarrick.

In 2005 and 2007, monetary compensation was paid by the Diocese of Metuchen and the Archdiocese of Newark to priests who alleged McCarrick had abused them when they were seminarians. McCarrick nevertheless went on to become a cardinal despite the payouts and the Dallas Charter remained unamended.