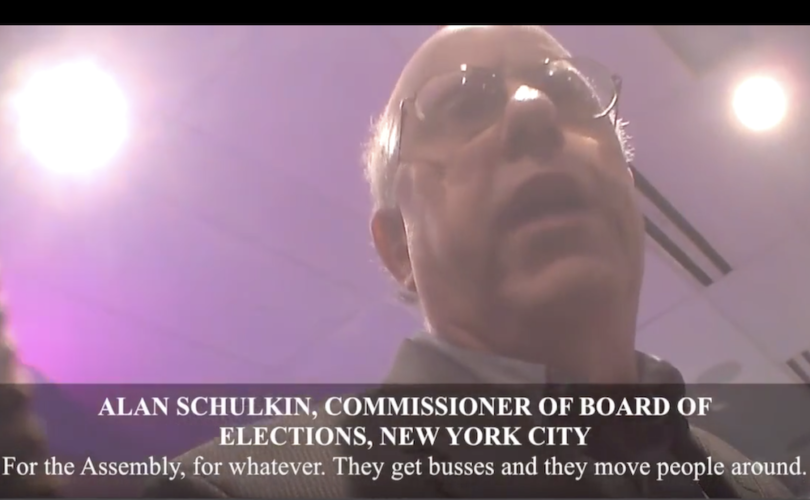 August 13, 2020 (LifeSiteNews) – As controversy rages over President Donald Trump’s persistent warnings about the potential to abuse mail-in voting, conservatives have revisited an incident from 2016 to support their argument that voter fraud is a very real problem.

But don’t take our word for it, take former NYC Elections Commissioner Alan Schulkin’s word for it. pic.twitter.com/uNbyapV5jh

“People don’t realize, certain neighborhoods in particular, they bus people around to vote,” Schulkin said. “They put them in a bus and move them from poll site to poll site.”

He went on to recall New York Democrat Mayor Bill de Blasio giving out ID cards, “but they didn’t vet the people to see who they really are. Anybody can go in there and say, ‘I’m Joe Smith, I want an ID card.’ It’s absurd.”

“You’re gonna see a lot of fraud, not just voter fraud, but all kinds of fraud,” Schulkin predicted.

After release of the video in 2016, a spokesman for de Blasio called Schulkin’s comments “baseless” and evidence that he was “unfit” and should resign. Schulkin refused, while claiming the video did not fully represent his true views. After the 2016 election, the Manhattan Democrat Party unanimously nominated Jeanine Johnson, chief of staff to Assemblyman Keith Wright, to replace Schulkin, who had ultimately decided not to seek re-election.

President Trump set off a firestorm in May when he tweeted that mail-in ballots for the upcoming elections would be “substantially fraudulent. Mailboxes will be robbed, ballots will be forged & even illegally printed out & fraudulently signed.” Twitter responded by taking the unprecedented step of adding a “get the facts” disclaimer to Trump’s tweets, linking to an article that claimed Trump’s charges were false. Yet evidence suggests cause for concern.

“An inspector general report by the USPS establishes the lofty goal of only 96 percent for election mail delivery success. Sadly, in 2018, the post office couldn’t even meet that sorry goal, delivering only 95.6 percent of election mail successfully,” wrote J. Christian Adams, an election lawyer who served in the Voting Rights Section of the Justice Department from 2005 to 2010. “In the 2016 Presidential race, four percent was more than the margin of victory in 10 states representing 124 electoral votes.”

Adams goes on to detail examples of issues across the country, such as Clark County, Nevada sending out 1.3 million mail-in ballots with more than 200,000 bouncing back as undeliverable; a West Virginia postman who confessed to altering mail ballots; and voters in Maryland and the District of Columbia being disenfranchised after sending out ballots that failed to reach thousands of voters, who were then unable to vote in person because their polling places weren’t open.

In New Jersey, an activist named YaYa Luis Mendez “was reported to have confessed to investigators that he snatched ballots straight out of mailboxes and voted them.” Mendez was actually a repeat election fraudster who had done the same thing under different names in Mississippi and Ohio.

Such cases demonstrate the “benefits of a system where someone votes a real ballot in person at a government-run precinct, where the public can observe the process,” Adams wrote.