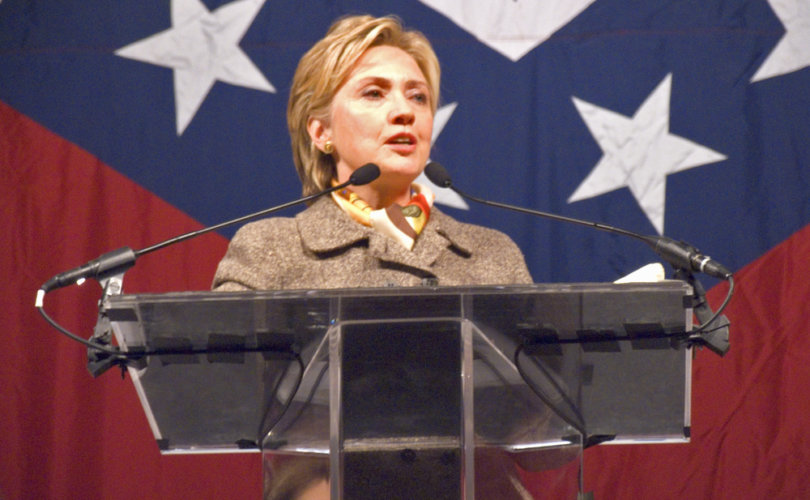 November 7, 2016 (LifeSiteNews) – Like the Democratic U.S. president she is trying to succeed, Hillary Clinton has done a 180-degree U-turn on the legalization of homosexual “marriage”—going from a religious-minded foe of genderless “marriage” in 2000 to a fervent crusader for it today as a supposed “constitutional right.”

Most ominously in a post-Obergefell America that is increasingly hostile to citizens who do not wish to participate in or validate same-sex “marriage,” Hillary Clinton is now a vocal opponent of “religious freedom restoration” laws like the one overturned in Indiana. These laws aim to preserve people’s right to live out their support for natural marriage before God (a belief Hillary shared pre-2013) and not to countenance sin.

She also openly expresses hostility to faith-based citizens who refuse to bend their thinking on homosexual “marriage.”

In that vein, Mrs. Clinton touts the federal LGBTQ “Equality Act,” which adds homosexuality and transgenderism to the 1964 Civil Rights Act and which, in its present form, would explicitly negate the federal Religious Freedom Restoration Act—which Congress passed to defend religious liberty and the First Amendment.

In 2013, Mrs. Clinton’s rather quick “evolution” on the issue culminated in her making the switch to supporting “gay marriage.” Gone was talk of the “sanctity of marriage”; she replaced that with calls for “marriage equality” (adopting the LGBTQ activist euphemism). Two years later, she tweeted that she was “Proud to Celebrate” the Supreme Court’s Obergefell decision that effectively imposed radically redefined “marriage” on all 50 states– including many whose citizens voted overwhelmingly to preserve God-ordained marriage between husband and wife.

Said Hillary then, “Marriage has got historic, religious and moral content that goes back to the beginning of time and I think a marriage is as a marriage has always been, between a man and a woman,” the Washington Post reported.

In 2004–arguing on the Senate floor against the Marriage Protection Amendment, which would make natural marriage between man and woman as inviolable in U.S. law—Sen. Hillary Clinton (D-New York) sounded like many Republicans today:

I believe marriage is not just a bond but a sacred bond between a man and a woman. I have had occasion in my life to defend marriage, to stand up for marriage, to believe in the hard work and challenge of marriage. So I take umbrage at anyone who might suggest that those of us who worry about amending the Constitution are less committed to the sanctity of marriage, or to the fundamental bedrock principle that it exists between a man and a woman, going back into the midst of history as one of the founding, foundational institutions of history and humanity and civilization, and that its primary, principal role during those millennia has been the raising and socializing of children for the society into which they are to become adults.

In 2000, Mrs. Clinton also said she would have voted for the 1996 Defense of Marriage Act (DOMA)—signed by her husband Bill in 1996—which established the primacy of natural, man-woman marriage in the federal government, and protected states who sought to preserve historic marriage through their own laws and constitutions. The Supreme Court overturned the former part of DOMA in 2013 (Windsor), and struck down the latter part in 2015 (Obergefell).

Jump forward to 2015, when Hillary Clinton made a made a major campaign speech at the Human Rights Campaign, the nation’s largest and most powerful homosexual-bisexual lobby organization, where she trumpeted the Obergefell decision.  She described nationalized homosexual “marriage” as “real progress.”

The Clinton presidential campaign has produced pro-LGBTQ campaign ads that show people of the same sex kissing and extol homosexual “married” couples. (Neither Donald Trump nor the Republican Party countered such ads.)

In a testy 2014 interview with NPR’s “Fresh Air” host Terry Gross, who criticized her from the Left, Hillary Clinton said she had rapidly “evolved” on homosexuality-based “marriage” since the 1990’s like much of the nation. Then, ominously, she took issue with the principled, faith-based Americans who do not wish to compromise or “evolve” like her on marriage. Reported Fox News:

Clinton also criticized those opposed to legalizing same-sex marriage, saying they are never open to change and live in an “evidence-free zone.” She said she believes it is good for people to continuously change.

“One of my big problems right now is that too many people believe they have a direct line to the divine and they never want to change their mind about anything,” she said.

Just like her approach on the issue of abortion, it is becoming increasingly apparent that on the entire homosexual and transgender agenda, Hillary Clinton believes it is the role and duty of government and the courts to compel those “divinely-connected” dissenters to override their own conscience on moral issues.

Clinton’s advocacy for the federal “Equality Act” and other legislation that criminalizes politically incorrect, biblically-based viewpoints on homosexuality—such as a bill in Congress that would ban pro-heterosexual therapy for homosexually-confused minors—could become the political fulcrum she and fellow “progressives” use to turn their “evolving” ideology into reality.