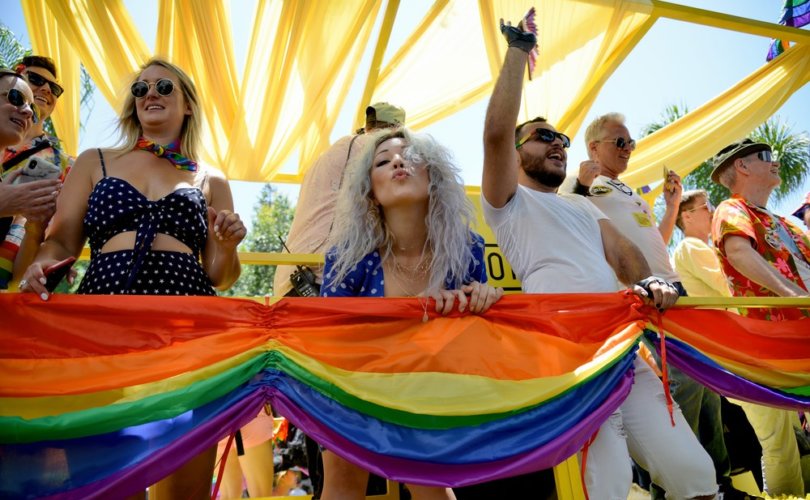 On July 9, 2000, the Polish pontiff described the LGBT provocations that marred the Holy Year in Rome as an “affront” to the Jubilee and an “offense” to the city’s “Christian values.”

In his Sunday Angelus address, St. John Paul II acknowledged the shocking scenes after addressing the grave issues of penal reform and ecumenical dialogue between the Catholic Church and the Orthodox Churches.

“I feel obliged, now, to mention the well-known demonstrations held in Rome in the past few days,” he said.

“In the name of the Church of Rome I can only express my deep sadness at the affront to the Great Jubilee of the Year 2000 and the offense to the Christian values of a city that is so dear to the hearts of Catholics throughout the world,” he continued.

“The Church cannot be silent about the truth, because she would fail in her fidelity to God the Creator and would not help to distinguish good from evil.”

The pontiff then read from the Catechism, which stressed both compassion for those sexually attracted to members of the same sex and also obedience to God’s will.

“In this regard, I wish merely to read what is said in the Catechism of the Catholic Church, which, after noting that homosexual acts are contrary to the natural law, then states: ‘The number of men and women who have deep-seated homosexual tendencies is not negligible. This inclination, which is objectively disordered, constitutes for most of them a trial. They must be accepted with respect, compassion and sensitivity. Every sign of unjust discrimination in their regard should be avoided,’” he read.

“‘These persons are called to fulfil God's will in their lives and, if they are Christians, to unite to the sacrifice of the Lord's Cross the difficulties they may encounter from their condition’ (CCC, n. 2358),” he continued.

The pontiff concluded: “May the heavenly Mother assist us with her protection.”

Almost 19 years later, Fr. Robert Chisholm of St. Gregory the Great parish in Picton, Ontario, reminded parishioners that “Catholics and all other Christians should not attend LGBTQ2 ‘Pride Month’ events held this month.”

“They promote a culture and encourage activities that are contrary to Christian faith and morals. This is especially harmful to children because it could lead them away from God’s revealed Truth,” he wrote in his June 9, 2019 parish bulletin.

Following a backlash by LGBT activists, Kingston, Ontario bishop Michael Mulhall distanced himself from the pastoral advice, saying that he did not sanction the message and that it “does not reflect the spirit of accompanying charity and compassion that should always characterize our faith.”

Nevertheless, for years LifeSiteNews has documented scenes from LGBT “Pride Day” parades and other homosexual “Pride” events that underscore that they do indeed “promote a culture and encourage activities that are contrary to Christian faith and morals.”