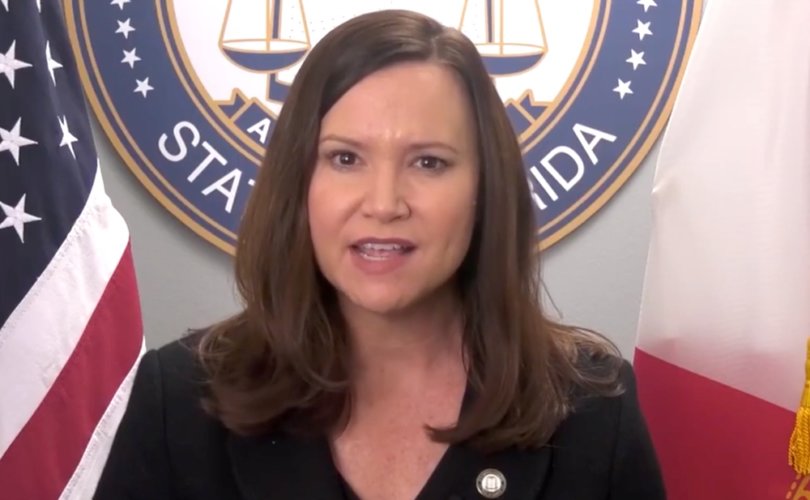 Attorney General Moody now wants to know if the abortion center failed to report “abuse or neglect” of the minor and if such failure did “enable the further exploitation of the victim in this case.”

“From the report, it does not appear that detectives nor the Department of Children and Families received any report of abuse or neglect from the provider. […] More troubling to me is the fact that it appears that a thirty-year-old unrelated male took a minor to the provider and no report of abuse or neglect was apparently triggered,” Moody wrote in a June 4, 2020 letter to the Florida Department of Law Enforcement. The letter was obtained by LifeSiteNews.

“From the facts contained in the reports, it appears that further investigation would be warranted to ensure that the provider did not enable the further exploitation of the victim in this case.  I would request that your agents conduct a further investigation into these facts and pursue those facts wherever they may lead,” she added.

LifeSiteNews (LSN) partnered with the Personhood Alliance (PA) on the petition earlier this year which urged Moody—a Republican who campaigned against trafficking and abortion—to investigate the abortion center at the heart of this case.

The petition followed the publication of an in-depth report by PA’s Sarah Quale published by LSN revealing that the young girl’s pre-born child was killed to cover up her trafficker’s crime and that the abortion facility staff failed to comply with federal and state mandatory reporting laws requiring them to alert authorities to suspected child abuse and trafficking.

The appeal to the Florida Attorney General Ashley Moody was simple and direct:

You were elected to your position, in part, because of your strong stances against abortion and human trafficking.

She was also taken to an abortion facility in Broward County, where her child was killed to cover up the crime.

But, even though the staff at the abortion facility are, by law, mandatory reporters, they apparently did nothing to alert authorities of suspected trafficking. They also seem to have ignored Florida's Parental Notice of Abortion Act.

These two apparent inactions likely prevented the victim from being rescued sooner.

We urge you to immediately open an investigation into the abortion facility that appears to have aided in the trafficking of this child.

Florida’s Chief Deputy Attorney General, John Guard, notified LifeSiteNews’ Gualberto Garcia Jones of the investigation of the abortion provider. Guard shared a copy of Attorney General Moody’s letter to Richard Swearingen, Commissioner of the Florida Department of Law Enforcement, directing him to deploy his agents to investigate the apparent failure of the abortion provider to report the sexual exploitation of a minor.

Human trafficking is a scourge on society and fighting to end it in Florida has been one of my top priorities since taking office.  In order to fight this atrocious crime, it is important that we not only catch the predators preying on our young and vulnerable, but that we hold accountable businesses and individuals legally required to report such misconduct who fail to do so.  The reason I write this letter is to address this latter point.

Recently, a criminal case was brought to my attention that was investigated by the Sunrise Police Department, Davie Police Department and the Broward County Sheriff’s Office.  Through their investigative efforts, those three agencies were able to capture a predator and secure the return of a juvenile who was being sexually exploited to her parents.  The predator, Christopher johnson, allegedly repeatedly assaulted a juvenile victim and posted those horrific assaults to different pornographic websites.  I have included the underlying offense report number and the ongoing criminal case number for your convenience.

Reviewing the reports in the Johnson matter, the juvenile was taken by Johnson to an abortion provider.  According to those reports, detectives recovered documents related to an abortion provider during a search warrant conducted as part of their investigation and the victim made statements about Johnson’s involvement in transporting her to the provider.  Florida law requires physicians, nurses, and health care professionals to report abuse and neglect of minors.  Florida law also requires parental notice or judicial waiver of that notice for an abortion to be performed on a minor.

From the report, it does not appear that detectives nor the Department of Children and Families received any report of abuse or neglect from the provider.  From those same reports, it appears that the victim’s family had no idea where the victim was or who she was with, was actively trying to find her, and otherwise acting in a manner inconsistent with a parent having notice of a pending abortion or a location where their daughter could be found.  More troubling to me is the fact that it appears that a thirty-year-old unrelated male took a minor to the provider and no report of abuse or neglect was apparently triggered.

From the facts contained in the reports, it appears that further investigation would be warranted to ensure that the provider did not enable the further exploitation of the victim in this case.  I would request that your agents conduct a further investigation into these facts and pursue those facts wherever they may lead.

Quale pointed out in her March 2020 piece that if the abortion center had followed Florida’s Parental Notice of Abortion Act, the girl could have been rescued from her trafficker earlier.

“If staff at the abortion facility followed this law, they would have been prohibited from aborting her child. Even if the trafficker managed to forge identifying documents for the girl, he couldn’t have proven his legal guardianship, and the victim’s mother would have been notified of the whereabouts of her daughter.”

To thank Attorney General Ashley Moody for launching this investigation, her office can be reached in the following ways:

Office of the Attorney General State of Florida
PL-01 The Capitol
Tallahassee, FL 32399-1050