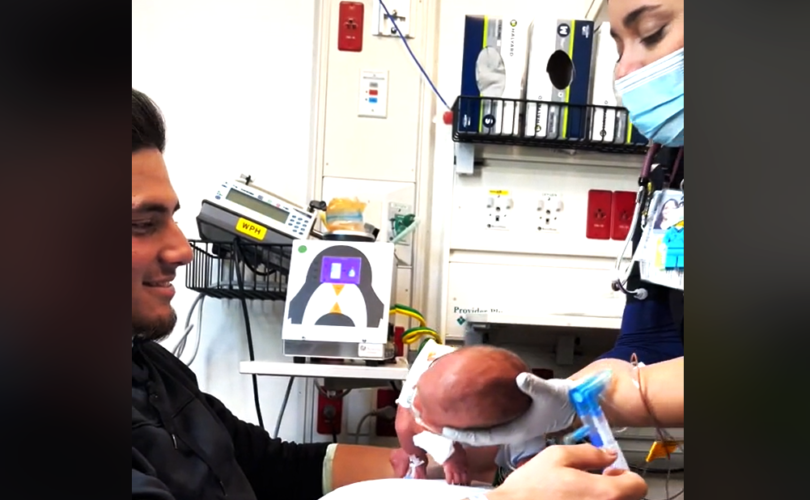 (LifeSiteNews) — When Jaiden Ashlea and her fiancée Noah were told of their unborn son’s rare birth defect, they were advised to seek an abortion.

“Our son was diagnosed with spinal bifida at 19 weeks,” Ashlea said in a video she posted on TikTok. “At first, we were told there’s no hope, he’s going to be brain dead, he’s going to have no life.”

After the initial shock and discouragement, the young couple, both age 23, began to search for other options beyond giving up on their child’s life.

“We actually found a team of doctors in Orlando who specialize in open fetal surgery to repair the neural-tube defect in the baby’s back,” Ashlea said.

After a rare and life-saving journey, Jaiden and Noah welcomed their son last week.

Spinal bifida is a neural-tube defect that appears on the spine. It can be diagnosed before birth or may not be realized until after.

According to the CDC, this condition “can happen anywhere along the spine if the neural tube does ot close all the way.”

“When the neural tube doesn’t close all the way, the backbone that protects the spinal cord doesn’t form and close as it should. This often results in damage to the spinal cord and nerves.”

Physical and intellectual disabilities depend on the specific conditions of each case but are lasting impacts of the defect. The CDC states that roughly 1,427 babies are born each year with a diagnosis of spinal bifida, or “1 in every 2,758 births.”

The Winnie Palmer Hospital for Women and Babies in Orlando states on its website that not every mother and baby are able to qualify for surgery, even though spina bifida is typically discovered during pregnancy. Completing various testing and screening processes, Ashlea and her son were accepted applicants for the procedure.

“Those that are (eligible) tend to have better results with in-utero surgery than waiting for an operation after delivery,” the website states. Mother and baby are required to “undergo a thorough workup to determine their candidacy for fetal surgery.”

“This type of treatment is performed between 19 and 26 weeks of pregnancy because the fetus [baby] is considered viable and could survive if an emergency delivery were required,” according to the hospital’s website.

Just a few weeks after the diagnosis, Ashlea went into a six-hour surgery. The procedure consists of a Caesarean (C-section) incision. Rather than simply delivering the premature baby, the surgeon instead repairs the damaged spine as best he can before repositioning the child and closing the mother’s abdomen. The umbilical cord remains intact, and the baby is never removed from his mother’s womb. After the surgery, the baby is brought to term (or as close as possible) to be born.

Ashlea’s C-section delivery was tentatively scheduled 11 weeks after the surgery. During that time, her baby’s health improved significantly, according to the Jerusalem Post. Although not a complete cure, the successful surgery is expected to decrease the flow of fluid to the baby’s brain and increase his ability to walk.

Five days ago, Ashlea shared a post with her followers, showing the tender moment of a father meeting his newborn child for the first time.

Levi James is still in the hospital. Although he is expected to require physical therapy for years as he grows, possibly up to age 18, his life has been saved through the help of skilled doctors and hopeful parents who would not give him up for the option of abortion.