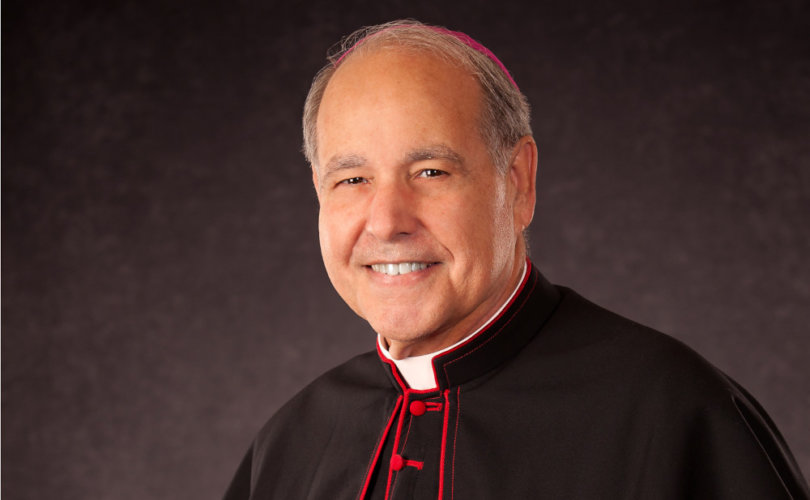 Under the sweeping restrictions on the traditional liturgy and sacraments announced by Bishop Felipe J. Estevez of the Diocese of St. Augustine in Florida on May 18, the traditional Latin Mass at Jacksonville’s Basilica of the Immaculate Conception, locally renowned for its beauty, will be axed when Traditionis Custodes takes full effect in the diocese on June 29.

In his decree, Estevez has relegated the traditional Latin Mass in the diocese to two churches where it is already celebrated: St. Joseph’s Parish in Jacksonville and St. Edward’s Parish in Starke, where it is only celebrated on the third Sunday of the month.*

— Article continues below Petition —
STAND with Abp. Cordileone as he bars Nancy Pelosi from Holy Communion until she repents
Show Petition Text
15026 have signed the petition.
Let's get to 17500!
Thank you for signing this petition!
Add your signature:
Show Petition Text

As per the instructions of the motu proprio Traditionis Custodes and its accompanying Responsa Ad Dubia, Estevez decreed that “there should be no increase” of Traditional Latin Masses (said according to the Missale Romanum of 1962) beyond those approved; that the readings for Latin Masses “are not to be proclaimed in Latin;” and that “There should be no celebration of other sacraments and/or rites according to the Rituale Romanum,” which includes baptism, penance, Holy Communion, matrimony, and extreme unction, excluding only Holy Orders and Confirmation.

Estevez added that those who attend the Traditional Latin Mass should receive “appropriate catechesis” regarding “the celebration of the liturgy according to the liturgical norms of the Second Vatican Council.”

The bishop’s instruction immediately following this point states that “It is never proper for elements of the Missale Romanum of 1962 to be brought into reformed liturgy promulgated by the Holy See following Vatican II.”

Eric Sammons, editor-in-chief of Crisis Magazine, slammed the entire decree but singled out the last instruction as the “biggest howler,” suggesting it is absurd and impossible to completely exclude “elements” of the Traditional Latin Mass from the Novus Ordo Missae.

“So no more readings? Or signs of the cross? Or consecrations?” Sammons questioned.

It is unclear whether Estevez is advising adherence to norms that exist only in practice or to actual directives of the Vatican II document on the liturgy, Sacrosanctum Concilium. The document itself prescribed that “the use of the Latin language is to be preserved in the Latin rites,” and that Gregorian chant “should be given pride of place in liturgical services.”

Along with the announcement that the basilica’s Latin Masses would be canceled beginning at the end of June, Fr. Blair included in his Sunday bulletin an instruction from the Diocese of St. Augustine advising Catholics not to attend Society of St. Pius X (SSPX) Masses, and not to “avail themselves in” the sacraments or rites of the Rituale Romanum, because Pope Benedict XVI stated in 2009 that “the Society has no canonical status in the Church.”

However, Pope Francis later gave the SSPX faculties to hear confessions and celebrate marriages, prompting Bishop Athanasius Schneider to comment, “It’s difficult to say that these priests are outside the church or are schismatic when they possess the ordinary faculties of Confession given by the Pope himself. And then the pope authorized the bishops … to grant the priests of SSPX the faculties to assist canonically at marriages.”

Kennedy Hall has noted that being “in communion” with the Catholic Church is a binary concept that “does not permit of degrees,” and so one cannot be in “partial communion” any more than someone is “partially pregnant or partially married to someone.”

He goes on to point out that “Neither schismatic Orthodox nor Protestants are allowed to receive Holy Communion or any other Sacraments until they convert,” but the faithful of the SSPX may receive Holy Communion in any Catholic parish “because all are baptized members of the Holy Catholic Church and none are excommunicated or schismatic,” adding, “With this simple understanding it is clear that the SSPX is in communion” with the Church.

A number of faithful clerics and laymen have decried Traditionis Custodes as “illegitimate” and have urged priests to ignore it entirely. Esteemed liturgist Dr. Peter Kwasniewski maintains that true obedience to God requires that we disobey raditionis Custodes, and that we are “obliged to resist” it.

During a speech at the 2021 Catholic Identity Conference, Kwasniewski highlighted St. Pius V’s bull Quo Primum, which declared of the Tridentine Mass, “In virtue of Our Apostolic authority, We grant and concede in perpetuity that … this Missal is hereafter to be followed absolutely, without any scruple of conscience or fear of incurring any penalty … ” and that no priest is “obliged to celebrate the Mass otherwise than as enjoined by Us.”

“We likewise declare and ordain … that this present document cannot be revoked or modified, but remains always valid and retains its full force … Would anyone, however, presume to commit such an act [i.e., altering Quo Primum], he should know that he will incur the wrath of Almighty God and of the Blessed Apostles Peter and Paul.”

Kwasniewski has asserted that Traditionis Custodes’ “fundamental message” is: “What earlier generations held as sacred does not remain sacred and great for us too, and it can be all of a sudden entirely forbidden and considered harmful. It does not behoove all of us to preserve the riches which have developed in the Church’s faith and prayer, or to give them a place at all.”

Archbishop Carlo Maria Viganò has gone so far as to state that “Those who limit themselves to expressing reservations or criticisms of Traditionis Custodes and of the Responsa fall into the trap of the adversary, because by doing so they recognize the legitimacy of an illegitimate and invalid law … ”

“Traditionis Custodes and the Responsa must simply be ignored, returned to the sender. They must be ignored because it is clear that their intention is to punish Catholics who remain faithful, to disperse them, and to make them disappear,” Viganò continued. He noted that such “traditionalists” “oppose heterodox doctrines condemned up until Vatican II, which it made its own.”

It was announced Monday that Bishop Estevez’s retirement has been accepted by Pope Francis, and that Arkansas priest, Father Erik Pohlmeier will succeed him as the next bishop of the Diocese of St. Augustine.