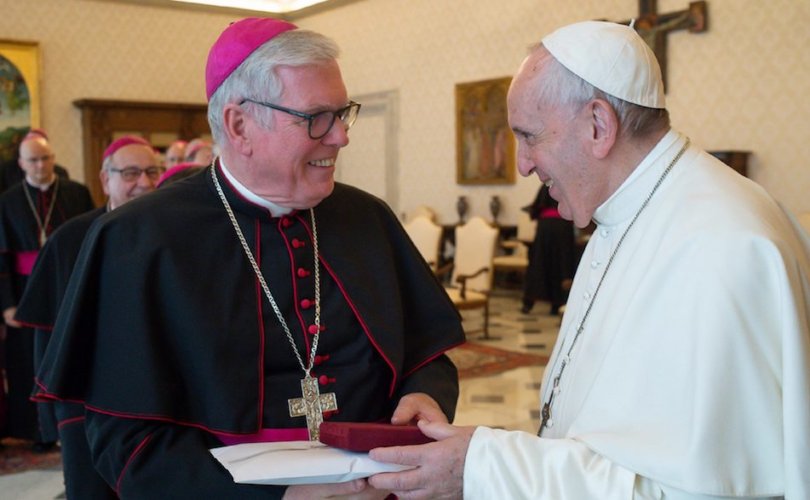 In a letter to priests Tuesday, Bishop Frank Dewane wrote that Mass may not be celebrated ad orientem – facing the East or facing the tabernacle or apse – without his permission. The move follows a similar policy announced last month by Cardinal Blase Cupich of Chicago.

Bishop of Venice, Florida, via a letter to priests and invoking #TraditionisCustodes, forbids the use of ‘ad orientem’ in any Novus Ordo Masses with a congregation. The bishop twice misspelled ‘ad orientem’ as ‘ad orientum’. Does this imply a lack of familiarity with the subject? pic.twitter.com/wDBFAWQjCK

Ad orientem was the common orientation for celebrating Mass for at least 1,500 years, until the 1960s and 70s. Leading prelates, including Pope Benedict XVI, have endorsed the posture as a more reverent option in recent years and noted that Church has never restricted it.

But Dewane’s letter, which repeatedly misspelled “ad orientem,” falsely suggested that priests do not have a right to adopt ad orientem worship, deriding it as a “personal choice.”

“At the beginning of this present Liturgical year, the Diocese became aware that some priests were celebrating the Roman Rite according to the current Roman Missal ad orientum (sic), at least on occasion,” the bishop wrote. “It is known that certain groups promote this practice and assert that it is the ‘right’ of a priest to choose this form of celebration.”

Dewane quoted sections of the General Instruction of the Roman Missal (GIRM) about altars, including paragraph 299, which says that altars are to be built so that “Mass can be celebrated at it facing the people, which is desirable wherever possible.” He also cited a paragraph stating that churches should have a free-standing altar on which Mass is to be celebrated alone.

“The plain meaning of these norms is that when celebrating the Mass according to the current Roman Missal, it is expected that the orientation of the priest will be facing the people,” Dewane concluded. “Any other interpretation of the norms is mistaken.”

The Florida bishop’s letter contradicts the interpretation of the Vatican, however.

In an April 2000 letter (Protocol no. 564/00/L) explaining the General Instruction, the Vatican’s Congregation for the Divine Worship and the Discipline of the Sacraments (CDWDS) confirmed that ad orientem worship is not forbidden and that the Mass rubrics express “no preference” for the priest to face the people or the apse.

“Holy Mass may be celebrated versus populum or versus apsidem,” according to the letter, signed by prefect Cardinal Jorge Medina and secretary Archbishop Francesco Pio Tamburrino. “Both positions are in accord with liturgical law; both are to be considered correct.”

“It should be borne in mind that there is no preference expressed in the liturgical legislation for either position,” the Congregation stressed. “As both positions enjoy the favor of law, the legislation may not be invoked to say that one position or the other accords more closely with the mind of the Church.”

‘Any Mass can be celebrated facing the Lord’

“Priests in the Diocese of Venice should celebrate the liturgy facing the people and not impose their own private choices when celebrating a Mass with a congregation,” he wrote, though he left the posture at Masses without a congregation “to the Celebrant’s discretion.”

“In any case, no priest can celebrate a public Mass ad orientum (sic) without the Ordinary’s written permission,” Dewane added. “With pastoral concern, I ask priests to abide by the norms in the General Instruction and not create confusion about the proper celebration of the Roman Rite.”

Responding to recent attacks on ad orientem, Cardinal Raymond Burke affirmed in an interview with EWTN last week that priests can indeed properly celebrate any Mass facing the Lord.

“Any Mass can be celebrated facing the Lord or facing the East, ad orientem or versus dominum,” said the cardinal and prefect emeritus of the Apostolic Signatura. “I don’t find anything in the documents of the Second Vatican Council that would lead to a banning of the traditional posture or position of the priest during the celebration of the Mass, and why this is now being brought forward I don’t understand.”

“And in fact, many people tell me – and it makes perfect sense – that it’s a very beautiful thing to have the priest at the head of the congregation offering the Mass when everyone is facing Our Lord, so this makes it clear that the sacrifice is Our Lord’s Sacrifice,” he said.

Pope Benedict XVI has similarly encouraged the posture, which he described in his 2000 book The Spirit of the Liturgy as “first and foremost, a simple expression of looking to Christ as the meeting place between God and man. It expresses the basic Christological form of our prayer.”

Cardinal Robert Sarah also notably urged a return to ad orientem worship in 2016 while he served as prefect of the Congregation of Divine Worship under Pope Francis.

“I believe that it is very important that we return as soon as possible to a common orientation, of priests and the faithful turned together in the same direction—Eastwards or at least towards the apse—to the Lord who comes, in those parts of the liturgical rites when we are addressing God,” he said. “This practice is permitted by current liturgical legislation. It is perfectly legitimate in the modern rite.”

And though Bishop Dewane made a point of cracking down on legitimate ad orientem liturgies, at least one priest in his diocese is incorporating New Age practices into Mass and openly violating the General Instruction.

In Sunday Mass on January 22, Fr. Jerry Kaywell of Sacred Heart parish in Punta Gorda replaced the Penitential Act with “a beautiful in-breath.” “And let’s breathe out our preoccupations, and our projects, and our worries, and our plans,” he continued.

“Let’s take another big breath, and we feel ourselves enter a silence that leads us into the mystical dimension of our faith.”

The breathing practices reflect techniques commonly seen in New Age “mindfulness meditation” or yoga, which has been condemned by the Church.

“I saw a comment last week, or the week before. Someone said, you know, what you people are doing is not liturgy, it’s performance,” the priest acknowledged at one point in the homily.

While the bishop of Venice (FL) bans ad orientem, he apparently has no problem with a priest in his diocese replacing the Penitential Rite with three "spiritual breaths".

Source (warning: this is a full boomer Mass): https://t.co/pHIoLxYgcz pic.twitter.com/lANApa4AIs

Kaywell’s innovations also clearly violate norms for the Introductory Rites of Mass set forth in the General Instruction and by the USCCB.