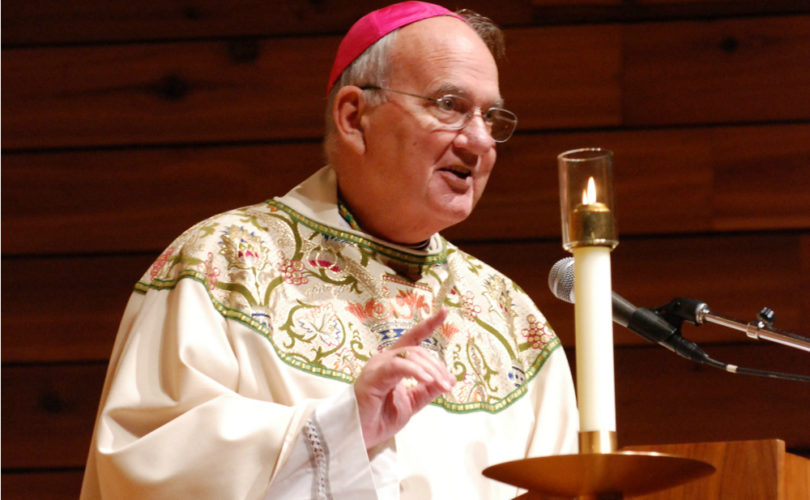 While Miami Archbishop Thomas Wenski reminded diocesan employees they could face termination if they publicly suggest support for same-sex “marriage,” St. Petersburg Bishop Robert Lynch suggested in a January 6 Tampa Bay Times column that homosexual relationships present no risk to the Church, and in fact can be godly and elevate society and the Church.

“I do not wish to lend our voice to notions which might suggest that same-sex couples are a threat incapable of sharing relationships marked by love and holiness and, thus, incapable of contributing to the edification of both the Church and the wider society,” Lynch wrote.

He cited last fall’s controversial Extraordinary Synod on the Family, saying the Church must respond to a suggestion made at the synod to discern what “pastoral response faithful to Church teaching and marked by respect and sensitivity might be appropriate for same-sex couples.”

He opened the column by recounting Church teaching on marriage: that it consists of one man and one woman, and is sacramental, indissoluble, and open to life. He then shifted to emphasizing the need to “recognize that the reality of the family today, in all its complexities presents the Church with pastoral challenges as the Church strives to accept people in the specific circumstances of their lives and support and encourage them in their search for God and their desire to be members of the Church.”

Archbishop Wenski’s letter to employees reminded them about the about the archdiocese’s employment policy, which requires employees to witness to Catholic moral teaching in their personal life.

“Whatever the role in which you serve within the archdiocese, you publicly represent the Catholic Church and the archdiocese in everything you do and say,” he wrote. “Therefore it is important that you understand the Church’s position and are well informed.”

“There's controversy brewing within the Catholic Church over the legalizing of same-sex marriage,” noted a WTSP Tampa Bay report. And the homosexual activist group Human Rights Campaign published a piece with the headline, Which of These Catholic Voices Represents the Church’s Stance on Gay Couples?

New Ways Ministry, a dissident group claiming to advocate for homosexual Catholics, praised Lynch’s column. “Another bishop … has commented on the legalization of same-gender marriage in Florida, but this time he is seeking to calm the fear and hysteria fomented by the state’s other Catholic leaders,” their blog post read.

A LifeSiteNews inquiry to the Diocese of St. Petersburg for comment was not returned prior to press time.

Miami Archbishop reminds diocesan employees: you could lose your job if you support gay ‘marriage’