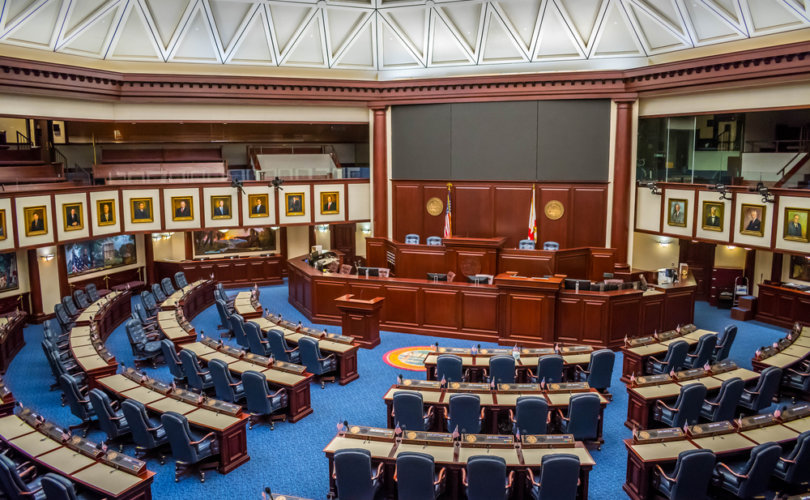 The legislation has been derided by homosexual activists and the mainstream media as the “Don’t Say Gay” bill, though the word does not appear anywhere in the legislation, which passed the full Florida Senate on Tuesday.

We’ve got one thing to say to our GOP colleagues — GAY! pic.twitter.com/AiXzW0chUq

“We’ve got one thing to say to our GOP colleagues — GAY!” the Florida Senate Democrats’ Twitter account said Monday.

The law, however, is meant to protect parents and students from teachers and counselors who groom kids to identify as homosexual or transgender, meaning gender dysphoric.

It could help parents like January Littlejohn. “After many weeks of going back and forth with the district, we learned the middle school had created a transgender, gender nonconforming support plan with our 13-year-old daughter without our knowledge or consent,” Littlejohn told The Daily Citizen, Focus on the Family’s news arm.

The bill, if signed by Gov. Ron DeSantis, will also prevent “a school district from encouraging classroom discussion about sexual orientation or gender identity in primary grade levels.”

Siri, why do Republicans always win in Florida even though it’s a purple state? https://t.co/6Nhr611O5b

“The bill that liberals inaccurately call ‘Don’t Say Gay’ would be more accurately described as an Anti-Grooming Bill,” Pushaw wrote on March 4.

“If you’re against the Anti-Grooming Bill, you are probably a groomer or at least you don’t denounce the grooming of 4–8 year old children,” she wrote. “Silence is complicity. This is how it works, Democrats, and I didn’t make the rules.”

If you’re against the Anti-Grooming Bill, you are probably a groomer or at least you don’t denounce the grooming of 4-8 year old children. Silence is complicity. This is how it works, Democrats, and I didn’t make the rules.

“Why do you want to talk about sexuality to Kindergarten–3rd graders? They are way too young for that,” she challenged one person on Twitter.

Gov. DeSantis has defended the bill and taken reporters to task for falsely claiming it prohibits the saying of the word “gay.”

DeSantis: “Does it say that in the bill?”

DeSantis: “For who?… Grades Pre-K through 3.”
pic.twitter.com/gqMiYKyVzg

“You peddle false narratives,” DeSantis told a reporter. “We’re going to make sure that parents are able to send their kids to kindergarten without having some of this stuff injected into their school curricula.”