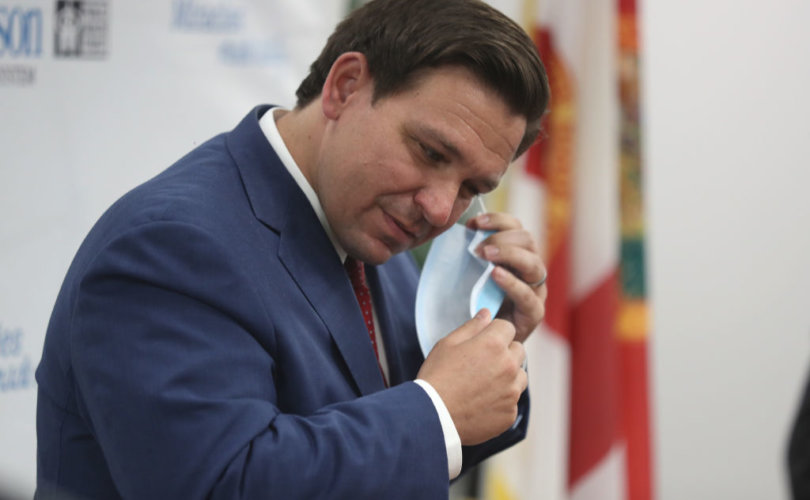 Florida Gov. Ron DeSantis takes his mask off to speak at a news conference on the surge in coronavirus cases in the state held at the Jackson Memorial Hospital on July 13, 2020 in Miami, Florida.Joe Raedle/Getty Images

FLORIDA, October 5, 2020 (LifeSiteNews) – Governor Ron DeSantis of Florida has come out swinging against those who want schools to remain shut over COVID fears.

On Friday, October 2, DeSantis joined Drew Steele to discuss the state’s Covid response. Steele, a homeschooling parent, told DeSantis that school closures did not affect his children’s schooling, but asked the governor to comment on the disruption this caused for the majority of the state’s children.

DeSantis responded that the school closures were “one of the biggest public health mistakes in modern American history.” He acknowledged that many people were worried when he announced in July that schools would be free to return to in-person classes, as Florida was at that time seeing an increase in cases of Covid. Nevertheless, he was confident that “the outbreak was going to abate because that’s the natural cycle of the virus.” Further, he saw no reason to think that children would be a major vector for increased infection based on the data accumulated to that point.

DeSantis considers his view vindicated by the past month and half's worth of data, which shows that a surge in COVID cases did not follow the reopening of schools, a point that was highlighted in pieces by Washington Post and USA Today.

For those unable to homeschool, “taking away face-to-face instruction…means their kids fall tremendously behind,” DeSantis continued. He noted the importance not just of academics, but of the social development provided also by sports. Earlier in the interview, he had emphasized the need for a response to the virus that supported an overall healthy society to explain his generally less restrictive policies. “I focused a lot on making sure society continues to function. I think you fight a pandemic better from that posture than if society’s in the fetal position” he said.

DeSantis has been firm in wanting to see his state’s schools reopened. The state’s Department of Education issued an emergency order in July requiring all schools to reopen before the end of August. After a judge ruled that order unconstitutional, the state appealed, putting the court’s injunction on hold.