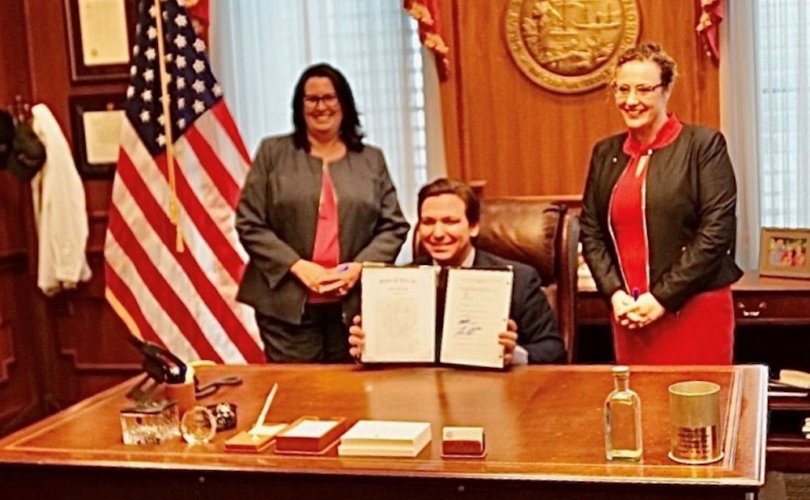 Florida already required parents to be notified, but Senate Bill 404 forbids abortionists from going through with a minor’s abortion unless they receive a “notarized written statement signed by a minor and either her mother, her father, or her legal guardian” agreeing that “the abortion is in the best interest of the minor.”

Consent will not be required in cases of “medical emergency” or if a judge grants a waiver. Judicial waivers must be based on finding “clear and convincing evidence” of the minor’s maturity to make the decision or else that a “preponderance of the evidence” indicates that her parents are sexually abusing her.

“What we are talking about is a child, and here we’re are talking about a child who is carrying a child,” bill sponsor and Republican state Rep. Erin Grall said. “By including parents in this decision we empower the family. It is the critical backbone of our civilized society.”

DeSantis signed the bill into law Tuesday, the Daily Caller reported. “Today is a win for Florida families,” Grall said.

“Parents in the Sunshine State will be able to protect their daughters from the abortion industry, which prioritizes its own profits over the health and safety of vulnerable girls,” said Susan B. Anthony List president Marjorie Dannenfelser. “We thank Senator (Kelli) Stargel and Representative Grall, both members of our National Pro-Life Women’s Caucus, as well as the Florida Family Policy Council and the Florida Catholic Conference for their tireless work advancing this important legislation.”

The law is likely to face a lawsuit from the abortion lobby, which at the very least would delay its enforcement. But while current U.S. Supreme Court precedent forces states to allow most abortions, the Court has also consistently upheld numerous lesser abortion regulations in the name of both respect for fetal life and concern for women’s safety, including parental involvement laws.

The law is slated to take effect today, July 1.