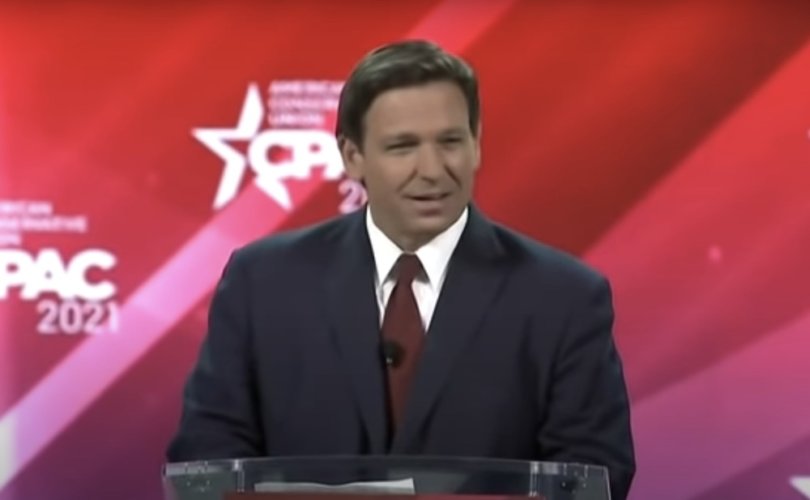 TALLAHASSEE, May 7, 2021 (LifeSiteNews) — Florida Gov. Ron DeSantis signed into law yet another package of conservative policy goals Thursday, this time in what the Republican leader calls the toughest election integrity law in the United States.

The Epoch Times reports that the new law bans the “harvesting” of mail ballots by activists, which DeSantis described as when “political operatives go and get satchels of votes and dump them in some drop box”; requires signature verification via “wet signatures” physically signed and kept on file; ensures election workers will be monitoring ballot drop boxes and strengthens the identity verification of people who use them; bans the mailing of ballots to residents who did not specifically request one, and more.

The legislation also bans the “use of private funds for election-related expenses,” thereby reducing the ability of left-wing groups like the Facebook-funded Center for Tech and Civic Life from buying their way into the management and oversight of local elections.

“Me signing this bill here says, ‘Florida, your vote counts. Your vote is going to cast with integrity and transparency, and this is a great place for democracy,’” DeSantis declared.

Democrat election attorney Marc Alias filed a lawsuit against the law within minutes of DeSantis signing it, representing the League of Women Voters of Florida, the Black Voters Matter Fund, and the Florida Alliance for Retired Americans, reiterating left-wing claims that it will somehow disproportionately make it harder for blacks, women, the elderly, and young adults to vote.

In fact, black Americans overwhelmingly support tougher election integrity measures such as requiring photo I.D. to vote (which Florida already did prior to this law’s passage).

“Why do [liberals] pretend that Black people are either opposed to voter ID or, even more offensively, that Blacks are incapable of obtaining IDs?” a group of black leaders, including Rep. Burgess Owens of Utah and former U.S. human rights Ambassador Ken Blackwell, wrote last month. “The answer is in part because the elites, most of whom are white, have enabled them, taking it upon themselves to determine who the ‘leaders’ of the Black community are and ignoring anyone else who suggests differently.”

The election law is the latest in a string of conservative policies DeSantis has advocated and/or enacted, including legislation banning left-wing critical race theory from public schools, forbidding “vaccine passports” that would coerce Floridians into taking a COVID-19 vaccine against their will, keeping gender-confused males out of girls’ athletic programs, increasing penalties for rioting, and limiting social media giants’ power to deplatform their political enemies.